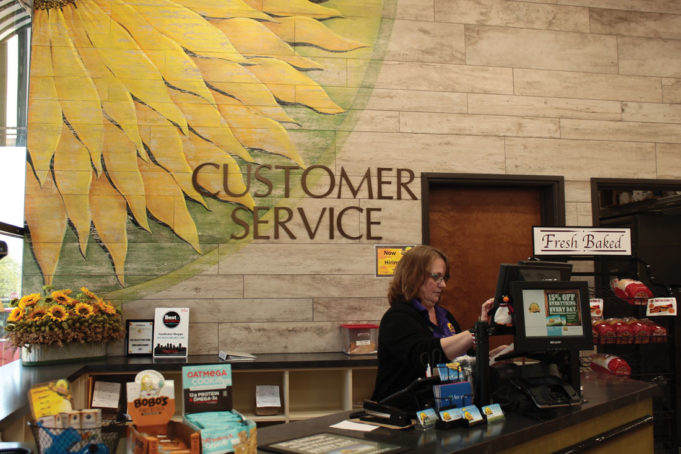 For drivers stuck in traffic on Camp Bowie Boulevard, it would be easy to miss the Sunflower Shoppe. Tucked behind a Texaco and a battery store on Curzon Avenue, the shop is awkwardly situated and not immediately noticeable.

It is only a giant yellow sunflower sign that signals the presence of the little store.

Sunflower Shoppe Vitamins and More has been a small but significant part of life in Fort Worth since it opened in 1970, selling a range of products –– from natural shampoo to goat’s milk. But with Whole Foods Market and Sprouts down the street, and a new Natural Grocers a few miles away on West 7th Street, the competition is stiff. The consumer shift toward online retailers and grocery delivery services has added to the challenge.

As part of the third generation of Bradfords to own Sunflower, McCarthy said they take the company’s reputation seriously.

“People perceive us as the local expert,” McCarthy said. “It’s not accidental. We’ve been doing this for 48 years.”

Sunflower gained a following in its early years, McCarthy said. Customers of the flagship store in Fort Worth –– there are also locations in Alliance and Colleyville –– are usually seniors who have shopped at Sunflower for decades. That customer loyalty is something Sunflower’s owners are proud of, McCarthy said.

While Sunflower sells organic groceries and skin and haircare products, the owners’ emphasis is on supplements. With customers’ needs ranging from diet inquiries to serious health concerns, the shop employs nutrition specialists to offer advice.

The Sunflower Shoppe has changed a lot since McCarthy’s grandmother, Bettye Bradford, opened the store 48 years ago. Back then, the shop (then located in Wedgwood) had only two employees: McCarthy’s grandparents. Her father joined the team a year later.

McCarthy described her grandmother as a “trailblazer,” running a business at a time when women had hardly any presence in the Fort Worth business world.

It was common at that time for people to visit health food stores when having health concerns.

In its early years, there were days when Sunflower made just a few hundred dollars. Now, McCarthy said the Sunflower Shoppe is much more than profitable.

“It has grown considerably,” she said while declining to disclose how many people are hired at Sunflower’s locations or how much the company makes each year.

According to estimates from the health market research group New Hope, 37 percent of all supplement sales in the United States in 2016 took place through nutrition and specialty retailers like Sunflower Shoppe. While that report shows internet retail accounting for only 6 percent of supplement sales that year, e-commerce –– led by Amazon and brands like Walmart –– has seen the highest growth of any sector. New Hope projects that internet storefronts may soon become the largest sector for supplement sales in the industry.

Fort Worth resident Linda Traylor has shopped at Sunflower since 1971, when she would regularly drive from Cleburne to Fort Worth to buy supplements. Now she stops by the shop once a month to stock up on seasonal products like immunity boosters.

“I truly enjoy that shop because they have everything I look for when I go in,” she said.

Sunflower Shoppe’s owners started to feel the effects of online retail about three years ago, McCarthy said, after websites like Amazon increased their nutrition and food services. Looking at the shop’s daily customer reports, McCarthy said they started to notice numbers dropping slightly each month. McCarthy declined to say how many customers they serve each week.

“I think it is affecting a lot of brick and mortars,” she said. “With us, we were late to the game with our website.”

That was when McCarthy said she and her co-owners realized they had to make price their focus. She said they started reviewing the products they sold and removed items that seemed too expensive.

At that time, Sunflower had no e-commerce component, but while the Sunflower website now allows customers to buy online with free shipping, most customers prefer to shop in person, McCarthy said. She added that this is likely due to the weekly discounts the shop advertises online and via social media.

“It’s fine, but it could do a lot better,” she said about the website. “It could be a real strong performer revenue-wise.”

In spring of 2017, Amazon launched its own private supplements label under its lifestyle brand Amazon Elements. The brand started as a line of baby products in 2014, but it now includes products like vitamin D2 and calcium pills.

Still, McCarthy said the shop has to appeal to all consumers, not just the most loyal. At Sunflower’s Colleyville location, shoppers are typically young families and stay-at-home moms – often with children with specialized dietary needs like Celiac Disease.

“If we want to stay relevant, we have to adapt a bit with fresher, newer products, [and a] cooler layout,” she said.

Sunflower buyers make their decisions based on market trends like popular diets and customers’ seasonal health needs, McCarthy said. Additionally, she said the Fort Worth store received a “facelift” several years ago to appear more modern. She said the update helped bring in younger shoppers.

A 2017 report from the consultancy group Euromonitor International found that in 2016, global internet vitamin sales for supplements accounted for 14 percent of all online retail revenue. At the same time, major brick-and-mortar supplement retailers Vitamin Shoppe and GNC struggled to expand their online presence. That was the 13th consecutive year of supplement industry growth, with sales reaching $7.45 billion, according to the Nutritional Business Journal. Lasher said business owners have to meet the needs of young shoppers – particularly when it comes to convenience and changing retail preferences.

Going forward, Lasher said Sunflower Shoppe must make sure consumers see the importance of human advice – a commodity that McCarthy believes her business is known for.

“There is certainly value in those health food stores,” she said. “It just becomes ‘Will they be able to compete?’ ”