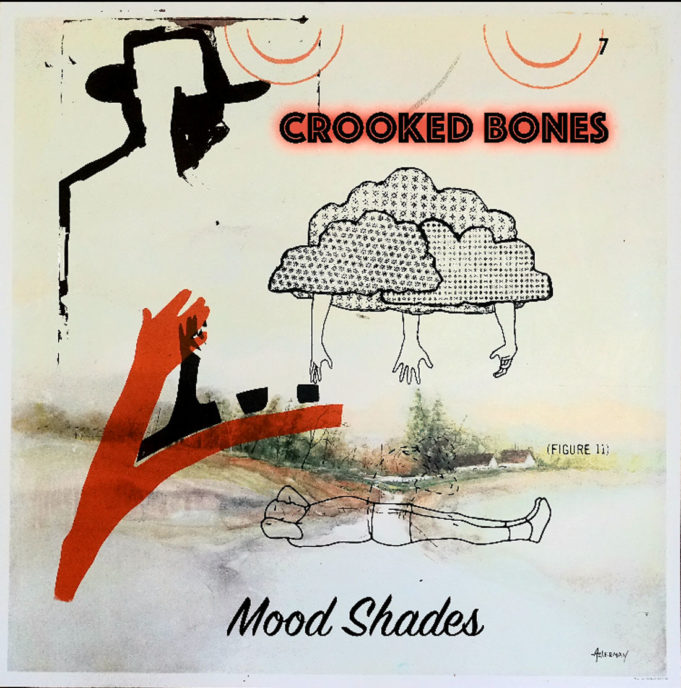 Tyler Rougeux has seen the good, the bad, and the ugly of the music industry. Boasting a Texas drawl tailor-made for rambunctious country rock, Rougeux has spent the last dozen or so years helping the Whiskey Folk Ramblers navigate ups, downs, financial strife, and a complete overhaul of their lineup. The Whiskey Folk are still ramblin’, but Rougeux isn’t sticking to one road. As the frontman for the three-piece rock group Crooked Bones, Rougeux has partnered with a pair of old buddies, mixed some Whiskey with a little Dick Dale, and started an exciting new chapter with Crooked Bones’ debut record.

Mood Shades is bookended by two tracks that will satisfy fans of Whiskey Folk. Opener “Singin’ to the Wind” is a moody rock song that highlights Rougeux’s prowess with a guitar. When he moans, “I don’t think I’m going nowhere,” you can’t help but think of haunting Rambler records like  … And There Are Devils. Ditto for “Firefly Lights,” the ninth and final track. It’s a slightly more upbeat tune, but Rougeux mines familiar lyrical territory when he sings of lurking ghosts and abandoned towns. However, apart from these two tracks, Whiskey Folk fans will find few similarities between the style they love and Rougeux’s new experiment. Mood Shades still highlights that classic Texas twang, of course, but it’s an old-school record that takes us back far beyond 2006, when Rougeux founded the band for which he is best known.

Crooked Bones consists of three middle-school buddies: Rougeux, drummer James Baier (who moonlights on the Dallas Mavericks’ drumline), and bassist Alex Mundt. The trio reunited a little more than a year ago and spent much of 2018 gigging and writing. Rougeux cites legendary surf rocker Dick Dale, Grandaddy, The Replacements, and The Pixies as his group’s main inspirations. At times, Mood Shades feels like an eclectic mishmash of these disparate influences. Songs like “By the Morning Light” represent an interesting contradiction of dirty Texas rock and Ventures-esque surf music. These juxtapositions mostly work thanks to the talents of Mundt and Baier, who are able to jump from one genre to the next with relative ease.

“Modern Gasoline” is a highlight because it captures the best of what the album has to offer. It’s an ode to a bygone era, and no one captures lonesome retrospect quite like Rougeux. Yet Mundt’s anchoring bass and Baier’s bouncy drumwork give the song some much-needed buoyancy, almost as if they are actively trying to cheer up their frontman. The same goes for “Damnit, I’m in Love,” wherein Rougeux laments catching feelings while his bandmates seem intent on carrying him and his voice out of the two-bit saloon where they found him.

This dichotomy of vocals and instrumentation also works on “Wasting Time” and “I’ll Be the Rain.” On the latter, Rougeux’s haunting, wallowing wails sound almost hopeful. Everything about the Crooked Bones frontman is unflinchingly consistent. Or maybe it’s tenacity. Or maybe he’s just stubborn. Whatever the case, he’s earned the right to experiment a little bit.

“I’ve been down, I’ve been out,” Rougeux sings on the album’s final song, before adding, “I’ve seen things worth talking ’bout.” Here’s hoping he continues to see more of the same.