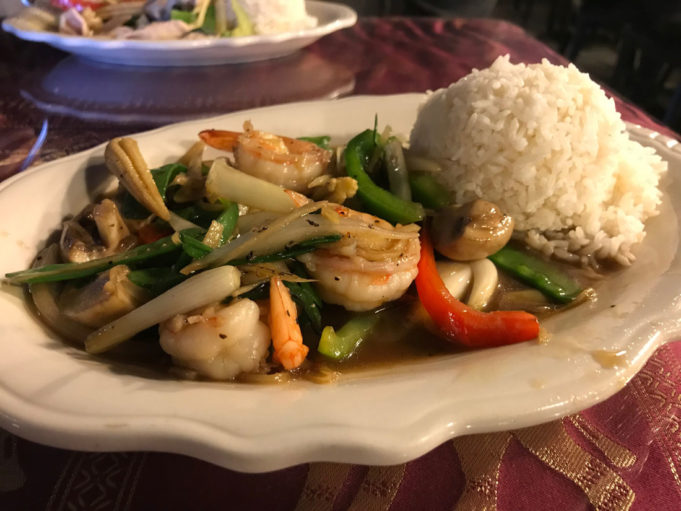 Ever since grade school, I’ve waited until the absolute last minute to finish assignments, and that terrible habit has wormed its way into my professional life. As it turns out, my tendency to shirk work makes me exactly like 90 percent of people who have ever held a deadline-oriented job. But unlike the rest of the world, my 11th-hour hustle is complicated by the fact that so few restaurants are open on Monday – the day before my deadline.

The next two places that were on my list to visit for this column – Hurst’s Salvadoreño Latin Cuisine and Yori Asian Fusion – are both closed on Mondays. With a deadline looming and a (apparently) pathological need to eat something in Hurst, I pumped my trusty Mid-Cities dining source for an off-the-beaten-path eatery to immortalize in print. I thought my pal was suffering from a new speech impediment when he suggested Thai Thip. I’m still not sure whether or not that second “h” is silent, but I’ll take his word for it.

There’s something going on in Hurst. It’s evolving from a quaint suburb with a small cluster of outstanding Asian joints into a full-fledged treasure trove of strip-mall gems. Two of my favorite meals of the past year were in that town, and I noticed four or five other interesting places on the way to the thippest eatery in Thurst.

Thai Thip is set in a strip-mall that’s designed to look like a small city’s town square, with multicolored brick edifices all facing an ample and far less attractive parking lot. The complex also houses a few interesting-looking eateries, including the aforementioned Yori.

For being my third choice, Thip does a lot of things right. The décor, while minimal, boasts a certain sophistication – or at the very least, it shows that the people who run the place care about its appearance. A mirrored wall adds depth to the small-ish one room, and red tablecloths emblazoned with Buddhist depictions of elephants enliven the space. The service is distinctly mom-and-pop, with two women alternately and ably manning the register and table service.

The moment my guest and I sat down, a cup of complimentary chicken-and-rice soup arrived at our table. Though it could have used a touch more seasoning, the chicken broth was improved by heaps of cilantro and scallions. It was a nice, unexpected touch on a cool day.

My guest’s pork green curry ($8.95) from the lunch menu was a master class in understated elegance. The sauce, aided by mildly sweet coconut milk, soothed the spice of the curry and made an excellent foil to the accompanying bamboo shoots, julienned zucchini and eggplant, sliced bell peppers, chopped basil, and whole green beans.

Two elements of my entree Thai ginger with shrimp ($10.95) stood out: 1.) The shrimp were large, expertly cooked, and plump – as opposed to the sad-looking salad-bar shrimp you too often see at indie joints, and 2.) the flavor of the oyster sauce, much like the green curry, was sweet-but-not-cloying and didn’t overpower the dish’s subtle ginger tinge. The stir-fried onions, mushrooms, baby corn, and snow peas made colorful sponges for the sauce. Both entrees were served alongside an ice-cream-scooper’s portion of spongy rice.

It’s places like Thai Thip that reinforce my bad behavior. All I have to do is wait until the last minute to find a great new lunch spot.