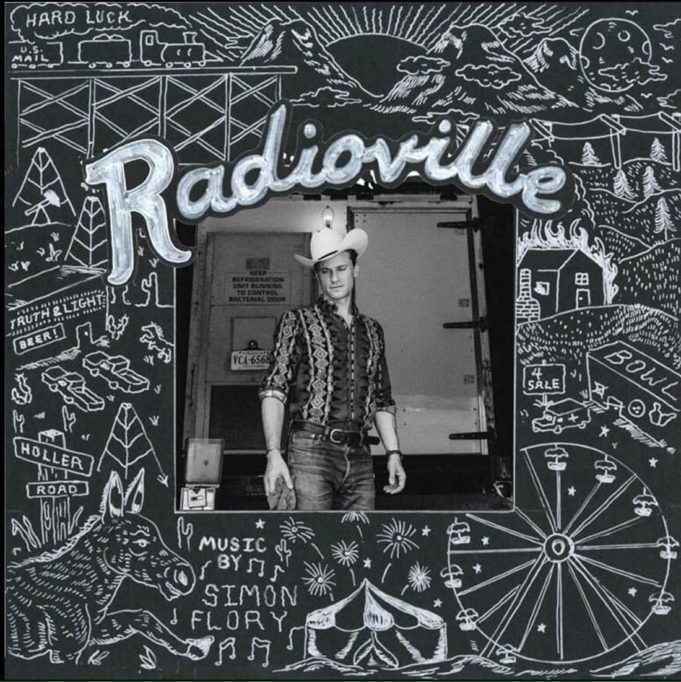 It’s fair to say Simon Flory is comfortable being old-fashioned. Flory, a native of rural Indiana, purveys a sound that is a melting pot of music you’d be hard-pressed to find on any radio station. In that sense, the title of his latest album is more than a little ironic. Radioville is a mix of bluegrass and Appalachia-inspired Americana, creating a 10-track tapestry that, while uneven, is ultimately a triumph, thanks to some of Flory’s twangy Texas music friends.

From the poppy first track, “American Ancients,” through the closer, “Soft Gravel Stone,” Radioville reeks of purposeful nostalgia. Recorded on an old tape machine, the album contains the kind of ramshackle story that causes musical purists to ooh and aah when others may be tempted to roll their eyes. At times, Flory tries so hard to be a serious country artist making a serious record that he forgets to cut loose and let the lyrics do the talkin’. The lyrically clunky “Station Agent” feels like Flory is going through the motions over a hastily pasted guitar melody, while the meandering “First Gear” suffers from fits and starts before finally floundering. Other tracks realize Radioville’s vision in a way that makes the bumpy road-trip worth your time.

Most of the album’s standouts are its collabs. Charley Crockett and Dylan Bishop join Flory on “Hard Luck Kid,” a melancholy ditty that doubles as a platform for its artists’ impressive vocals. “County Fair,” the album’s strongest tune, finds Flory making twangy magic with the help of Summer Dean, who sounds like she was born to duet on moody, moribund songs like this. “Appalachian Sky” features Noel McKay, Brennen Leigh, and the album’s most impressive instrumentation, as well as a fun rat-a-tat back and forth between its trio of artists.

Fittingly, it’s the title track that encapsulates the album’s achievements and shortcomings. “Radioville” is an ode to a town where not much happens and no one gets out, a community “bedridden by poverty and fear.” While the tune lacks lyrical originality, Flory’s fluid voice makes you think there just may be a way out of the dark, dank nooks and crannies of this town that time forgot. Maybe, thanks to Flory and his friends, we can remember why a town like this is worth singing about in the first place.