According to Code.org, a nonprofit website dedicated to promoting computer science jobs in America, there are more than 38,000 computing jobs open in Texas. However, there are only 3,500 computer science graduates. To bridge the gap, David Graham, an entrepreneur, computer programmer, and father, founded Code Ninjas. Starting in Houston in 2016, Code Ninjas has expanded to more than 300 locations, including five in North Texas, and its most recent location in Mansfield, which opened last month.

“Code Ninjas is an after-school program teaching 7- to 14-year-olds how to do computer programming,” explains Mansfield location owner Tirumalareddy Karri.

The school aims to expose children to computer science at a young age and make it fun for them. Students start at the white-belt level, using a game development program called Scratch that allows them to use simple drag-and-drop features to design a game. At the end of a three-year program, as students reach black belt, they learn to code in the Unity game engine, with the goal of publishing a game on the App store or on Google Play. Students are taught by “senseis,” usually high school and college students studying computer science as well.

Getting kids interested in computers and programming isn’t easy, and that’s where games come in.

“I have two girls and could never make [programming] interesting for them,” he said. “But the program made it enjoyable for them, and the fun quotient keeps kids invested.”

“They have fun building their own games, which they take to be published on the parents’ portal and played with other friends,” Karri said.

Along the way, through both learning the syntax of coding and game design, children are educated in problem-solving and logical thinking. Drop-in classes, meeting twice a week for one hour, also allow for schedule flexibility.

As for how they also achieve their goal of attracting kids from underrepresented groups, Karri said, “We are open to everybody. We have different programs, budgets, and are working on exposure to school districts.”

This includes the Hero Special, an almost 40-percent discount for teachers, military, and first responders.

“It’s a great opportunity,” said Ronald Bryant, whose 8-year-old son, Trey, began attending after the location’s opening. “He’s done other student programs, but he’s really excited here. There aren’t many options for a kid his age without district resources.”

The connection between coding and logic systems is already applying as well.

“Trey is already building robots, and the class is helping him code and learning to love STEM,” Bryant said.

Even the manager, Tracy Mays, is learning something. A Mansfield local with a background in education, she began in January and has progressed to yellow belt. “I’m able to enter code, and I’m proud,” she said.

That need for an outlet also applies to the senseis. Mohamed Ahmed, a senior at Frontier High School, joined Code Ninjas with other friends from his computer science class, and he enjoys helping kids learn.

“I’m able to set up and help kids with Scratch, and it’s great to see them smile, see them comprehend,” he said.

It’s something Karri enjoys too, as Trey Bryant finishes his day: “This guy has a big smile every time. It makes my day every day.” 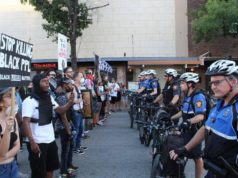