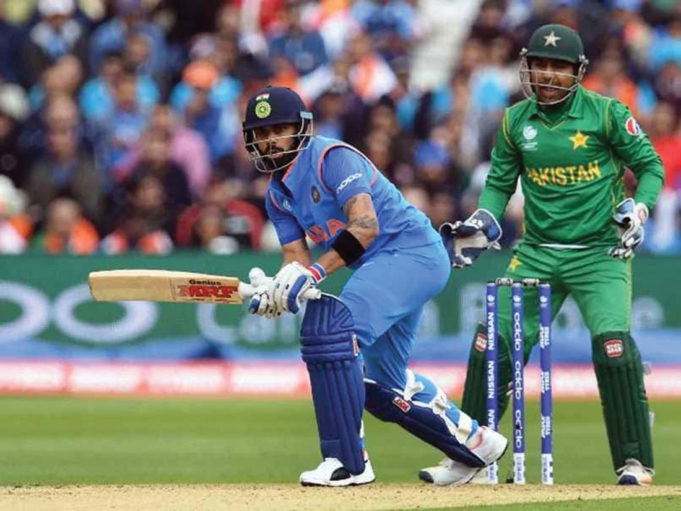 From May 30 to July 14, the Cricket World Cup will involve 10 nations competing in a round-robin format for a total of 45 matches, with the top four teams playing off in a single-elimination semifinal before a one-game final. If you have ever wondered about cricket — what is it? — or just want something super-relaxing to binge watch this summer, this article is for you.

Cricket is a bat-and-ball game, but it is not like baseball. Matches are played between two teams of 11 players on an oval field. At the center of the field is the pitch, a 22-yard-long-by-10-foot-wide grassless track with a wicket at each end. The wicket is made up of each three 28-inch-by-9-inch vertical stumps atop which sit two horizontal bails.

The objective of the bowling team is to dismiss (or get out) 10 of the 11 opposing batters. Conversely, the batting team seeks to score as many runs as possible in an allotted number of balls, or deliveries. Six runs are scored by hitting the ball clean over the boundary –– like a homerun but better. Four runs for hitting the ball to the boundary rope along the ground or having bounced at least once. If the ball is hit within the boundary, the two batters run end to end as fast as possible to score one run, two (a “brace”), or three.

The shorter the game format, the more likely we are to see a bunch of sixes and fours. The bowling team can dismiss a batter in a number of ways. Most commonly, the batters are bowled — the wicket is struck by the hard, leather-bound cork ball. Other ways include: LBW (Leg Before Wicket), in which the ball strikes the batter on his padded leg such that he prevented himself from being bowled; caught, in which the ball is nabbed by a fielder before it hits the ground; or run out, when the batter is caught short by a fielder striking the wicket directly with an inbound throw or a second fielder who tends the wicket snaffles the throw and strikes down the wicket with the ball. Three umpires ensure the historically scrupulous probity of the match, with one standing at the bowler’s end (the end switches from over to over), one in the outfield, and the third in a video booth. An over is a set of six balls, or deliveries, made by the same bowler.

For more than a century, cricket was essentially a gentleman’s game, played in whites (a uniform consisting of cream-colored long pants, a long-sleeve shirt, and a knitted sweater bearing the badge of your team or nation) with variously colored cloth hats designating your team. Australia, for example, is famous for its “baggy green.” Colonialism determined who played cricket: England, Australia, New Zealand, South Africa, West Indies, Sri Lanka (née Ceylon), India, and latterly Pakistan made up the roster of “test nations.” A test is a five-day war of cricketing attrition during which each side must bat and bowl twice. Fear not, the World Cup is one of the abridged versions of the game.

Each game will consist of 50 overs per team. That is a total of 300 balls bowled to dismiss the batting team, while those with bats in hand will seek to score as many runs as possible. Depending on climatic conditions and the type of pitch prepared, we can expect to see the better teams score north of 300 runs while the lesser teams are likely to be bowled out well short of their allotted overs after scoring fewer than 200 runs. Teams eschew the formality of whites in favor of donning colorful “pyjamas.” The eight test nations’ uniforms feature mainly all blue or all green of various hues, with West Indies standing out in their now-traditional maroon and New Zealand naturally wearing all black. Relative newcomers Afghanistan (wearing blue with red trim) and Bangladesh (who go with green trimmed with red) complete the field.

Now that we have the game’s basics down, let us consider what to look for in the tournament: runs. Fifty-over cricket, a.k.a. ODIs (One Day Internationals), used to be a game of cat and mouse: the batting team carefully avoiding having their guys dismissed while slowly amassing runs with a carefully orchestrated race to the finish in the last 10 overs. Australia, as the dominant cricket nation in all forms of the game for the 1990s and early 2000s, broke this mold. They introduced crash, bang, wallop cricket to each of the 50 overs. Three hundred runs used to be a good score, but late in 2018, the England team set a new world record of 481 runs. Look out, too, for spectacular catches, athleticism in the field, stunningly fast bowling, and mesmeric spin bowling. The “quicks” can deliver a bouncing ball at close to 100 mph. The spinners will bamboozle with high-revolution slower balls that turn in the air, strike the pitch wide of the wicket then convolute toward the stumps, leaving some of the world’s best utterly at a loss. It pays to be able to tell your googly from your doosra as the ball leaves the bowler’s hand. Similarly, mistaking a leg cutter for a Yorker can end in tears.

As the crème de la crème of cricket amass on the cricket fields of England and Wales this summer, a few players are likely to stand out with bat or ball. Virat Kohli of India is simply a wizard or a warlock. He must be. Only magical powers can adequately account for this man’s ability with a cricket bat. His reading of the ball, ability to pick the right shot, and his placement are combined with a steel will and indefatigable energy to form the best batter in recent years. Some even dare to compare him favorably with the Indian cricket deity, Sachin Tendulkar.

If you are looking for sixes galore, Chris Gayle of West Indies may be your man. Built like a heavyweight boxer, Gayle employs nifty footwork with raw strength to spray the ball to all corners of the stands and beyond. Don’t sleep on Jonny Bairstow (England), Kane Williamson (New Zealand), or Davey Warner (Australia). With ball in hand, India’s Jasprit Bumrah is greased lightning, consistently striking the opposition’s best and brightest this past year. Mitchell Starc is Australia’s quick. As unpredictable as he is pacey, Starc, on his day, is unplayable. At the slower, craftier end of the bowling spectrum, England’s Adil Rashid has shaped into a devilish spinner whose ability to strike at the perfect time has become irreplaceable. Keep an eye on Afghanistan linchpin Rashid Khan and South African rocket man Kagiso Rabada.

How is the tournament going to play out? While I expect Bangladesh and Afghanistan to cause a few scares and even an upset during the group stage, I see the whole thing settling down for the knockout games. The safe bet would look something like semifinals featuring England vs. Australia (first and fourth in group) and India vs. South Africa (second and third in group). From there, an England vs. South Africa final is most likely, unless King Kohli can deliver for an India side that typically underwhelm when they’re playing the U.K. The England team is in red-hot form, with a well-rounded first XI and backups and home soil advantage. They should win. English sports doesn’t do “should” very well. I will make an “either/or” prediction. Either England will dominate this tournament and win every game, or they will undo themselves, losing badly in a semifinal before Australia lifts the trophy.