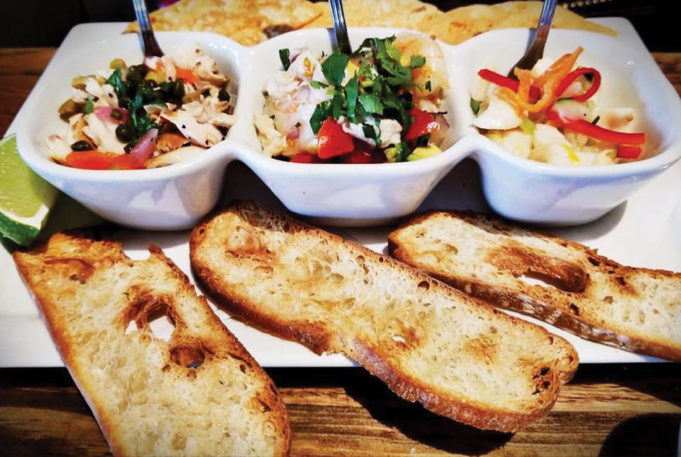 On the “Our Story” section of its website, Herencia Texican Cuisine boasts that it believes in the kind of food that “transports you home.”

“Home,” the story continues, “is somewhere between here and further [sic] south amongst all the vibrant fare in Latin America.” The restaurant dubs the result “Texican Cuisine,” noting there’s a lot more than just Mexican food in Latin America.

Lumping together the food from everything south of the border is a complicated ambition to live up to, and when you peruse the menu of soups, salads, tacos, enchiladas, and “Texican entrees,” you may wonder just how far south the inspiration lies.

OK, so there’s a gaucho rib-eye with gaucho-style vegetables and a carne asada Argentina-style chimichurri, but the bulk of the menu could be considered Tex-Mex – albeit an elevated Tex-Mex, with some imagination behind the tacos, enchiladas, and the rest.

The restaurant, which replaced a fast-casual eatery in the Shops at Southlake (the center anchored by Central Market), elegantly erases any memory of the space’s past. The waitstaffers on my visits were all attentive and knowledgeable, and, in the rare instance when one of my questions stumped a server, she or he was able to find an answer quickly.

The menu is varied enough to merit multiple visits, but the food has to be good enough to call you back. In the case of the visit for this review, the restaurant scored with almost every dish.

Even the one that my guest and I doubted, a ceviche-trio appetizer, wasn’t a total miss. The trio consisted of ceviches featuring a sea scallop (with cucumber, habanero, and orange wedges), smoked trout with olives and capers, and a classic with blue crab, Gulf shrimp, avocado, and pico de gallo. Of the three, the classic was the best. The smoked trout was also decent, though not as smoky as we would’ve liked. The chewiness of the scallops was off-putting, although the habanero lent a nice touch of heat.

Smoky grilled meatloaf, one of the “Texican entrees,” fared much better. The tender beef-pork blend, with hints of roasted jalapeños, rested on a sofrito sauce that added some tomato-onion umami. The meatloaf was good enough without the assist. As if it weren’t filling enough, the entree was accompanied by a meaty tamale and three thickly sliced green-chile-infused potatoes.

The green-chile potatoes are also available as a side, which we ordered to accompany one of the most traditional items on the menu, the classic cheese enchiladas, which arrived oozing cheddar and covered with a chili con carne sauce that added an earthy flavor. The half-dozen thick wedges that made up the potato side were a splendid golden hue and well-seasoned with the green chiles.

There was a bit of shyness with the spicy element in the chile-chocolate fudge cake dessert, which the menu advertises as having a “kick” of cayenne. It was more like a tap or a whisper, not that we minded much – the rich fudge flavor was satisfying enough, even with only the faintest hint of heat. The flan of the day – in this case, a Kahlua version – was more extroverted, with an appealingly strong coffee-liqueur punch. The dessert was surrounded by a chocolate drizzle dotted with tiny coffee bean bits for a little extra buzz.

The owners of Herencia have given a lot of thought to the menus here, including offering a separate menu for vegetarians that includes Oaxcan flatbread with portabella, zucchini, roasted peppers, and more, as well as a vegetarian asado with similar ingredients. There is also a “gluten-avoidance” menu – the restaurant is upfront about not being gluten-free but lists several items that can be served with reduced gluten.

Herencia also offers some moderately priced beers, a modest wine list, a few margaritas, and a dozen or so cocktails. The bar’s tequila/mezcal list is impressive, and there’s as a smaller but still notable bourbon program. A small weekend brunch menu is available, and the restaurant’s desert landscaped patio is one of the most attractive in Southlake.