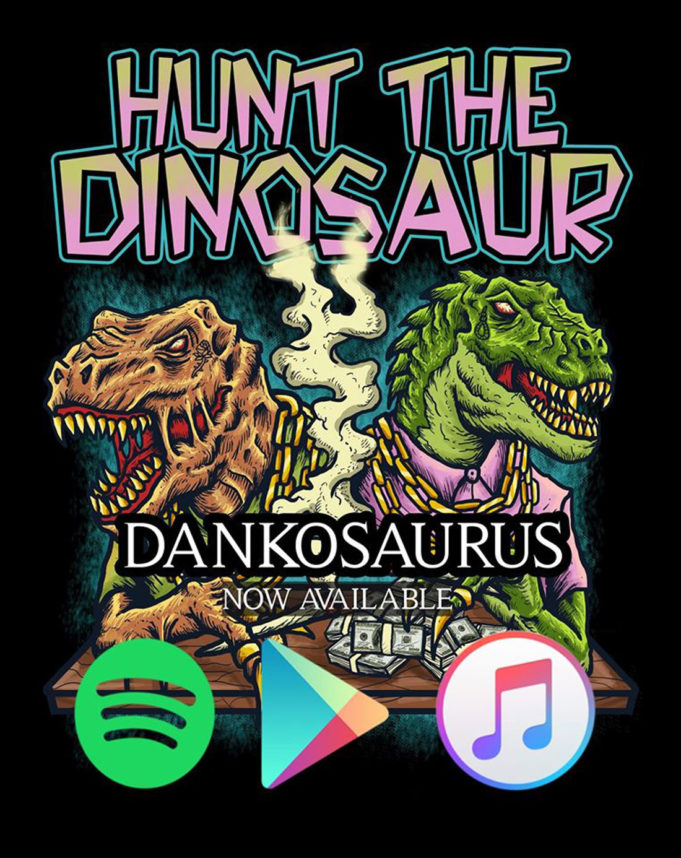 I am not that thoroughly invested in local metal, and, as such, I hadn’t heard of Hunt the Dinosaur until a friend showed me one of their videos for a song called “Destructo.” This was back in April, and while I don’t have the word-length to describe the video, it’s metal af. As it happens, the band’s manager, a guy named Taylor Wright, was getting beers at the Boiled Owl, and I had overheard him discussing social media engagement with area sound engineer/producer Joshua Ryan Jones. I couldn’t help but marvel at Wright’s description of his success in marketing Hunt the Dinosaur’s internet content – though the band hardly ever plays, its online traction is impressive and envy-inducing, especially if you’re in one of those bands attempting to build a consistent fanbase by the antiquated method of regular live performances.

The short of it: Hunt the Dinosaur’s YouTube channel has garnered a fanbase numbering in the hundreds of thousands across seven or eight videos. The least-watched of these has almost 4,000 views. Hunt the Dinosaur’s most-viewed video, a dope-inspired death-metal song about smoking weed called (wait for it) “Baked,” has been seen by users more than 805,000 times.

Wright insists that the key to these numbers is regularly posting engaging content, that it’s not how you engage fans (like, for example, by playing shows) but what you engage them with and how often. To his point, HTD has bent the ear – or peeled the eyeballs, as it were – of people all over the world.

Personally, I’m more fascinated with Hunt the Dinosaur’s grip on social media attention than I am with Hunt the Dinosaur itself –– though I will concede that the band is exceedingly tight, and if you grew up listening to Korn, you’ll probably love them. Here’s the gist: Hunter Madison is a 29-year-old drummer from Keller who learned to play music in middle school and high school bands in various percussive capacities ranging from jazz band to marching band to orchestra. He began playing drums in metal bands after he graduated. His favorite band of all-time is Slipknot, and that right there should tell you what you need to know about what HTD sounds like. Before you wonder aloud, yes, he does sing in a death-metal cookie monster voice, and sometimes he also raps.

I pointed out that he was possibly, sort of, maybe a little bit, reviving rap metal. “I mean, it could be death-trap, rapcore,” Madison said. “I just take elements of a lot of music I like, and it’s mainly rap and metal.”

He said lots of other things after that, like how he writes 70 to 80 percent of the music. Madison composes the songs first as drum parts and then by talking out the melodies and guitar rhythms with his backing musicians. Dankosaurus, the album that Hunt the Dinosaur released last Friday and promoted with a show the following night at Tomcats West, was four years in the making, a journey fraught with falling-outs and lineup changes and disappeared recording sessions.

It’s also a journey that began with a single viral video posted in 2013, a self-tracked death-metal cover of Chris Brown’s “Look at Me Now” that’s been seen more than 358,000 times. I had lots to say about the implications of Chris Brown songs continuing to resonate with hundreds of thousands of people, but instead I suggested to Madison that his music was “New-Nü Metal,” and he readily agreed. What he didn’t necessarily agree with was the idea that Wright’s social media gaming could work with just any band.

“I mean, it’s very unique,” Madison said. “I think that anything that’s made in the world, whether it’s music or some kind of item, anyone can replicate anything, but I think who gets there first is what dictates if it’s special or unique.”