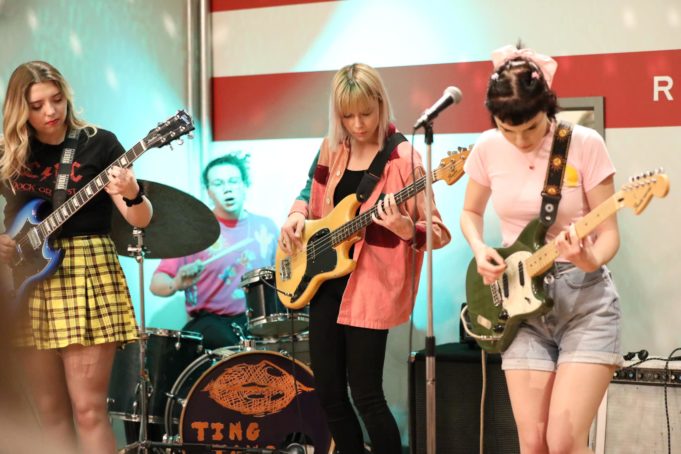 1) Sur Duda’s main dude Cameron Smith has been hosting a Tuesday night songwriter’s showcase at MASS (1002 S Main) for over a year now, at which he and a guest or two trade solo sets of whatever material they feel like playing. Called Excursions On A Wobbly Rail, the showcases provide Smith with an outlet for his own prolific songwriting, but they also give a venue for a lot of other songwriters who aren’t typically associated with the genre of “solo act.” Oil Boom’s Ryan Taylor, Son of Stan’s Jordan Richardson, and Sealion’s Sam Villavert are good examples of “band people” performing as “solo artists,” and this week’s features Katie Robertson, known for her piano and vocal contributions to modern southern rockers Chucho as well as accompanying various cover bands, most notably with Big Mike, and especially whenever he’s done music by the Band. EOAWR starts at 9ish, it’s 18+, and it’s free. Here’s Katie Robertson covering Aretha Franklin at Fred’s from a year ago:

2) The following night at MASS (that’d be Wednesday, if you’re just skimming these things), catch Jacob Furr’s full-band iteration along with a dude from Birmingham, AL named Will Stewart and a classic rock-oriented band from Tyler, TX called the Blacksmiths. The flyer has three horses running free across a plain, so I assume that’s evocative of the feelings this music is supposed to inspire in you. Other free-ranging animals that might inspire similar emotions: eagles (duh), vultures (because vultures go wherever they want, and you pretty much have to drive up on them with a car for them to move away from a dead squirrel, and they always seem put out to be interrupted in the middle of lunch), wolves (obviously), and Great White sharks. Few things are as free as a Great White, except perhaps a pod of orcas. Anyway, doors are at 7, show is 18+, and cover is $7. Will Stewart played some showcase on a program out of Memphis called Ditty TV, and this is video of him playing the title track of his County Seat album from that show:

3) Ting Tang Tina, Meach Pango, and Watering crew a bill at the Haltom Theater (5601 Belknap) on Friday night. File under indie rock, indie pop, and emo – Watering, from Dallas, includes Ian Salazar of Acid Carousel and Majik Taylor fame. I’m a big fan of that dude’s music, so Watering is probably a good band. These people in these bands are all pretty young, so obviously this is an all-ages show. Cover is $10, and the Haltom Theater offers free parking, which I’m pointing out because it was noted in the FB invite. Doors are at 8, the show starts shortly after, which could also mean 9pm, as phrases like “shortly after” are subjective and open-ended. Cover is $10, which is an objective fact. Here’s Ting Tang Tina chatting on the Retro Lab Records podcast:

4) Also on Friday: Big Useless Brain at the Ridglea Room (6025 Camp Bowie). You can read more about this band in this week’s Hearsay, though it includes the former singer of Cityview and one of the former guitar players of the Adderalics, bands you might not recall if you were like 14 or 15 in 2010. The Capitalist Kids, Durango E, and Dog Company are also on this bill, so it is indeed punk rock-oriented. Not sure what the order is, but doors are at 7, and cover is $10. Dog Company sounds kind of like Dropkick Murphys (but from Dallas), and on that brand, this is a song called “Raise A Glass,” which toasts “those who’ve gone before.”

5) Saturday night at Lola’s, there’s Speedealer (high velocity punk metal from the late ’90s who’ve been back in the saddle for the past year or so), Duell (ever heard of ’em?), and the Drawer Devils, all of whom will give your ears a proper hard rock shellacking. Doors are at 7, show is all-ages, cover is $10. And here’s one more listing, taking place on Sunday: Dead Vinyl (and a zillion other bands) bassist Zach Tucker’s sister is in town, so there’s a party for her at the Post at River East (2925 Race St) that’s anchored by Roar Shack, the band Tucker occasionally plays with that features Dusty Calcote and Upsetting drummer Charlie Debolt. He’ll also be playing a duo set before that with Morgan McElvey the woman who has run open mics at both Upper 90 and the erstwhile Craftcade, and most recently hosts the Boiled Owl’s karaoke night.; as well as songwriter Charly Mac. I don’t know what the cover is because they didn’t put it in the invite, but the party goes from 6-midnight, and it appears to be 21+, though that’s not specified either. Insert shrugging shoulders emoji. Do you have time to watch a video of an entire Speedealer set from Gas Monkey Live last year? Here is one: