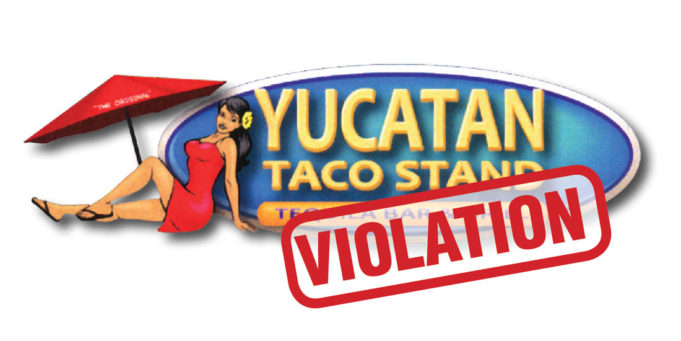 I hate to pile on what must be a truly difficult time for Yucatan Taco Stand (908 W Magnolia Av, 817-924-8646). For those who don’t know or whose brains have deteriorated to mashed potatoes after a couple of weeks of the usual machine gun-style imagery from social media, the West Magnolia Avenue eatery was temporarily shut down by the health department after its second failed inspection on August 8. City inspectors found a litany of issues, including unclean food-prep surfaces, inadequate refrigeration, a wastewater backup, and improper food storage.

On August 15, Star-Telegram said, “The restaurant was given 34 demerits on a scale of 0-100. Yucatan corrected some problems and was re-inspected the next day but still drew 11 demerits, including critical violations for unclean food preparation surfaces and residue inside the ice machine.”

On Facebook, Yucatan’s owners apologized, said everything was fixed and clean, and pledged to do better, and the doors were open a couple of days later. It’s worth mentioning that this is hardly the first time the 11-year-old eatery has run afoul of the health department. Back in March, the place was dinged with 22 demerits, and it was popped 27 times as far back as 2017. Still, it’s great the owners took accountability, acknowledged the problem, and made big promises. Apparently that’s all you have to do to get a pass from some local media.

I’m only sort of kidding. But check out these headlines from a couple of news outlets. Fort Worth Magazine contributed the most bizarre entry to the mini-frenzy: “Hooray! Yucatan Taco Stand Reopens Following Maintenance.” The article itself was far less cheerleadery (after the first sentence). I’m just not sure exactly what the headline writer was celebrating except some cheap search engine optimization.

The Star-T’s Bud Kennedy penned two stories. Both pieces were down the middle and chock full of info. However, the headline to his second story seemed a little rosy: “Fort Worth Taco Restaurant Toasts its Reopening After Two Days of Cleaning, Repairs.” The “toast” was no doubt referring to the happy hour specials the bar was offering as a bribe to regain customers.

Both these softball headers make the taco stand’s troubles sound more like a youth group-sponsored lock-in and cleaning party (with pizza!) than a serious threat to public health. The coverage of this whole ordeal smacked of a couple of rags trying to soften the blow for the restaurant after reaping all those sweet, meaty clicks –– as if the Star-T and FWTX were doing crisis PR for a restaurant with a long history of health-related infractions.

No one in print offered a serious opinion about Yucatan’s repeated troubles – no other print outlet seems to offer opinions about anything food-related anymore – so allow me to be the first. Unless the beleaguered taco stand makes wholesale changes immediately, why should anyone trust the word of the very owners who allowed the place to deteriorate into a danger to public health in the first place?

When the Stand first opened 11 years ago, it was one of the few places in town serving this exotic fare called a fish taco. “Whaaat?” we all said in 2008. “Fish in a taco?! What is this, California?” The kitchen, then led by Chef Paul Willis of Fuzzy’s fame, was a well-oiled machine cranking out decent gussied-up Cali-Tex-Mex. These days – and several owners later – the Magnolia Avenue staple is known more for its bar. The food has been in sharp decline for years, and, apparently, so have the standards of cleanliness and competence of its managers.

I’m going to wait a year and see if all of the happy talk from ownership takes hold. Imagine this headline: “Formerly Gross Taco Stand No Longer Dangerous.” I can’t wait to get those page views.