A couple of residents in southeastern Fort Worth have made it their mission to rid their part of the landscape of bandit signs. You know the kind of sign we mean – short, colorful placards attached to two flimsy metal legs and stuck into the ground near intersections to advertise online dating, cheap houses, easy credit, whatever. City officials consider them traffic hazards, clutter, eyesores, and unwanted obstacles when mowing rights of way. City workers pick up and destroy many thousands of the signs each year. Replacements, however, sprout again quickly.

Two guys in particular have made it their mission to remove bandit signs. The men, who asked not to be named for fear of reprisal, say they try to take photos of the people and the license plates of the cars being used to put up the signs, which violate city code regulations and carry a maximum fine of $500 for each violation.

One of the men said a major offender in his neighborhood was Capital Plus Financial, a mortgage financing company that serves the “Hispanic population by providing credit that is otherwise unavailable.” We called the company’s main number and left a message but did not hear back by press time.

A woman who has been seen installing bandit signs for the company is named Ashlee – one of the complainants said he has photographed her and her car and reported her to code enforcement.

“It’s litter – just plain litter,” the complainant said. “Don’t trash up our neighborhoods to benefit yourself monetarily. The rest of us can’t promote our businesses that way. Can you imagine if everybody did? Our neighborhoods would look like a classified section.”

Earlier this year, the complainant and a friend – both of them middle-aged white men – said they were following Ashlee and taking photos of her erecting signs, and she called police.

“She told them we were stalking her, and she was afraid we were going to shoot her,” the complainant said. 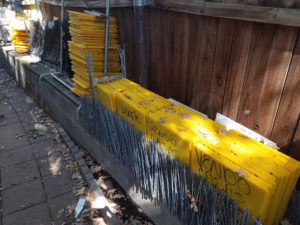 The men had already called code enforcement, and a code officer and police officers arrived at about the same time, the complainant said. The woman was cited. The two men were free to go.

“Things didn’t go well for her,” he said.

The company’s bandit signs, however, keep appearing in large numbers, and the two men keep removing them.

Weekly reporter Jeff Prince called the woman to ask whether she would continue putting up the illegal signs. A woman who identified herself as Ashlee said, “There are a lot of street signs everywhere – it’s not just us.”

Ashlee said she has not received any complaints.

You’ve been complained on and cited in the past, Prince said.

“I paid a ticket online,” she said. “Where are you calling from?”

“And you’re calling me because of what?” she said. “Why would you have my personal information if you are calling me from a newspaper?”

Ashlee lists her name, phone number, and occupation online. The complainant had provided her name and a company name as well. Calling her was easy.

The woman said she knew Prince’s name and phone number and was “going to press charges” because he had “no business calling me.” Then she hung up.

A rattled Prince can’t decide whether to flee the country to avoid police or to go eat lunch. We’re betting on lunch.

As for the signs, they are still appearing in the neighborhood.