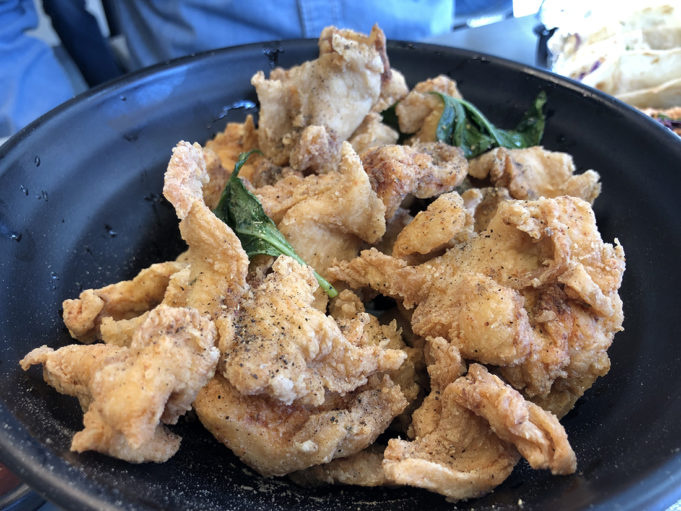 The word pho is pronounced “fuh.’ I know that, and you probably do, too. Heaven forbid you say it the way it’s spelled. Hordes of Food Network-worshipping nannies will crawl out of the bushes to correct you. Why is no one offended when I mispronounce “acai” (ah-sigh-ee as opposed to ah-kai) or “gyro” (yee-roh, instead of ji-roh)?

I was discussing restaurant experiences with a relative recently, and she clung to every syllable of “fffuuuhh” as if she was stroking out. It struck me as insincere, like one of those TV news reporters rolling their tongues on the word “Nicaragua.”

The one time I’ve enthusiastically read the word pho the way it is meant to be pronounced was on my recent trip to Hoang’s Noodle House (8405 Harwood Rd, NRH, 682-560-9529), a food truck-turned brick-and-mortar set in a gas station in North Richland freaking Hills. On the outside window of the tiny two-table Asian fusion eatery, there are signs encouraging would-be customers to get “Pho’k Up.” Both my inner 12-year-old and food adventurer were thrilled.

The first thing I noticed on entering the cramped interior of the gas station is that Pall Malls are $5.99. They were less than $2 back when I smoked. Hoang’s ramshackle operation is situated down a runway of discounted energy drinks and three sad-looking 8-liner gambling machines. Still, there’s nothing bleak or off-putting about the setup.

An enthusiastic diner seated at one of the two communal six-tops greeted us with the promise of “really great food,” as he and his lunch crew enthusiastically threw out the names of local chefs and other obscure restaurants they’d visited. Clearly, they’re readers of this column.

My guest and I ordered most of the lunch menu, presented as pictures hung on the walk-up counter, and the food arrived as it was finished cooking. Our first taste from the kitchen, the entree portion of the chicken karaage, beautifully battered bits of bird topped with basil and served with a spicy Sriracha mayo, was an elegantly simple take on classic Japanese fried chicken. Unfussy as it was, the dish was a harbinger of what followed: prepared using the freshest possible ingredients and cooked with precision. 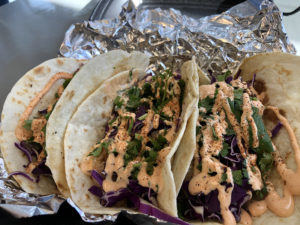 Every bite of the shrimp tacos, served with red cabbage and topped with the piquant house sauce (a pepper-laden aioli), delivered the same dopamine-churning effect. Served three to an order, the large, plump crustaceans were swaddled in an ample flour tortilla that demanded your modesty be checked at the nearby check-cashing kiosk.

After devouring our order of four egg rolls, wrapped in a brittle, phyllo-like fried shell and stuffed with fresh-tasting ground pork, glass noodles, and carrots, the house pho arrived steaming hot, accessorized with an accompanying plate of lime, bean sprouts, and a boutonniere’s worth of basil. Bottles of hoisin and Sriracha were at the ready.

The deeply amber beef broth glittered with tiny droplets of oil. The first flavor to hit the tongue is star anise, followed in quick succession by ginger, cilantro, garlic, onions, and a touch of chicken in the long-boiled broth. Last to unfold is the exemplary housemade noodles. In the depths is a hoard of meats, including sirloin sliced razor-thin, gobs of meatballs, and tender brisket like something a Jewish mother or Texas pit-master might make.

It was the type of ambrosial brew you crave on a cold night – and you don’t mind driving to a gas station in North Richland Hills to find. The sign outside was prophetic. That soup pho’k me up pretty good, and now I can’t live without it.