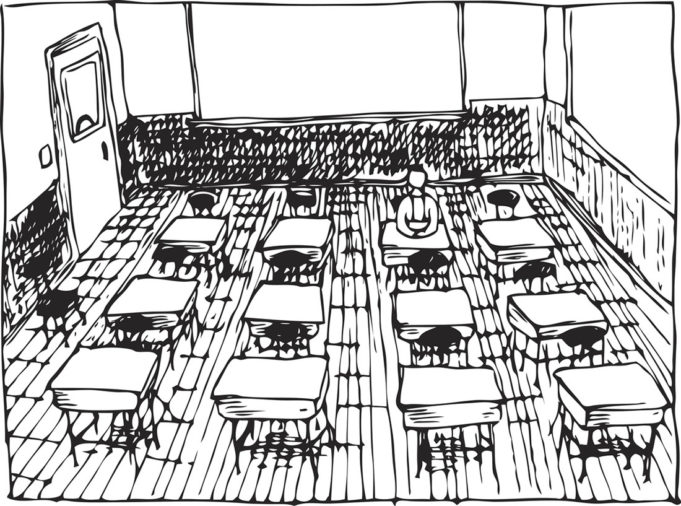 Like other large, urban school districts, Fort Worth’s is tasked with ensuring that tens of thousands of young minds achieve academic success. And much more. Counselors, teachers, and other school staffers spend a significant portion of their day handling discipline issues — including drug use, fights, and bullying — while preparing the district’s some 84,000 students to be good citizens and productive members of the workforce. The stakes couldn’t be higher, and the majority of the Fort Worth school district’s teachers go above and beyond what their job descriptions entail.

Working in a large public school system is never going to be a perfect experience, said Terry Roach, who began teaching in the Fort Worth school district in 1996, but there’s always the chance that you can make a difference in the lives of students. After decades of on-and-off work in the classroom — he took intermittent breaks to explore other careers — rhetorical prompting comes naturally to him.

“Why are we here?” he asked before continuing. “For the kids. You have to have that passion, to know that you’re doing something good.”

Although Roach loved teaching students, last year, the veteran Spanish teacher reached a breaking point while working at South Hills High School. He said his principal told him to mark students present who had barely spent 15 minutes in a 45-minute class. Roach said he found little support from staff when he reported rampant tardiness of students and public use of marijuana. What he did receive from voicing concern, he said, was retaliation in the form of discipline reports and overcrowded classrooms. He shared the disciplinary reports, which noted what could be described as trivial offenses, including descriptions of how Roach could improve his ability to de-escalate confrontations between students in his classroom.

I reached out to the school district for comment and was told that I would have to file open records requests for any response. Open record requests are typically used to acquire documents and records, not quotes from government officials.

But Roach didn’t want our interview to focus on his personal grievances with the school district. He was meeting to talk about what he described as school district violations of Texas Education Agency (TEA) guidelines and the district’s lackluster ranking in the all-important STAAR Test.

Each year, the combined efforts of the Fort Worth school district and every other state school district are distilled into one number — TEA’s annual State Report Card grades. This year, Cowtown’s public schools earned a 79, up from 75 the year before. TEA doesn’t reveal the secret to its report card formula, but the number is basically an average of three criteria: STAAR Test Performance, career readiness, and graduation rates. Fort Worth’s career readiness score jumped from 73 to 80, according to TEA, while the graduation and STAAR rankings each held steady at 65 and 69 respectively.

By comparison, Arlington, Dallas, Austin, and Houston respectively garnered an 86, 86, 89, and 88. Fort Worth School District Superintendent Kent Scribner told the Star-Telegram last August that he remains focused on guiding his school district to nothing short of an A under his tenure. Scribner said he is focused on examining what works in elementary schools and replicating those policies throughout the district. Roach said he speaks for many local teachers when he hears the “spin” from administrators.

“College readiness is a good thing, but it shouldn’t be used to hide what is happening with student learning,” Roach said. “The learning isn’t there.”

And how can quality learning occur, he continued, when students don’t show up to class and teachers are overstretched and left without adequate time for lesson planning? Roach recently spoke before the Fort Worth school district’s board of trustees.

He highlighted two TEA code sections that he said are being violated. Section 21.404 states that each teacher is entitled to “at least 450 minutes within each two-week period for instructional preparation.” With seven classes to teach and administrative staff disrupting his one period off, Roach said he documented numerous violations of this entitlement. Potentially more serious is what Roach said are ongoing violations of section 25.092, which states that students must be in attendance for at “least 90 percent of the days the class is offered” to be marked as in attendance.

“Students can show up as they wish,” Roach said. “Last year, my principal said to mark anyone I saw as present. That made me feel uncomfortable. That’s a legal document saying that this minor was in my care for 45 minutes. I was told to mark students present no matter when they showed up. If a student walked out, the administration is saying it’s a discipline issue” and not an attendance issue.

When I asked how many of his colleagues have concerns about enforcement of TEA attendance guidelines, Roach shared a private text conversation he recently had with a principal of a Fort Worth high school who was alarmed that students were being marked as present after showing up for the last few minutes of class, according to the message.

The school district board is more concerned with large construction projects and bond packages than student performance, Roach said. He points to board meeting agendas as proof of what he said is distracted school district leadership.

“We are a district in crisis,” he said. “There is no other way to look at it. Something needs to counter the spin.”