I’ve always admired informants. A lot of people don’t. They call them rats and stool pigeons. They say “snitches get stitches.” It’s true, many informers are driven by base motivations: money, revenge, notoriety, the hard-wired human instinct to save one’s own ass. Sometimes they’re not, though, like those rape and sexual assault victims who finally took down Harvey Weinstein. Those women deserve a parade, and even the wormy snitches warrant some grudging praise. After all, it’s not as if anyone in power can be trusted to report their own misdeeds, not governments, not corporations, not churches, not movie studios, not universities, not the Boy Scouts, not cheating baseball teams. These institutions protect themselves with codes of honor and loyalty that are there to let crooks and pedophiles go about their business undisturbed. Give me a snitch with good info, because I like knowing what’s going on.

Tommaso Buscetta was one of these, a smuggler for the Sicilian mafia in the 1980s who saw two of his sons murdered, figured he no longer owed anything to the code of omertà, and spilled everything he knew to Italian prosecutors. At considerable risk to his own person and his family, he made his former employers pay for his sons’ deaths, to the tune of more than 300 convictions. This weekend, an epic about him called The Traitor plays at the Modern, and it’s a fine mobster movie that comes at this hoary genre from a fresh angle.

One of Italy’s best actors, Pierfrancesco Favino, plays Buscetta from 1980, when the mafia makes the fateful decision to move into the emerging heroin market, to 2000, the date of Buscetta’s death from natural causes in Miami. (The lumpen-looking Favino has decent English, and you may have seen him in World War Z, Rush, or My Cousin Rachel.) He’s already looking to retire as the story begins, reasoning, “You can’t take money to the grave.” He manages a soft landing with a beachfront property in Rio de Janeiro, where he lives quietly with his Brazilian wife (Maria Fernanda Cândido), their children, and his children from previous marriages. It only lasts a few years before the Brazilian government, convinced that he’s the mafia’s drug conduit in their country, arrests and tortures him fruitlessly before extraditing him back to Italy. With his sons dead — one of them having already been hooked on heroin, giving his father a good look at the effects of the stuff he’s smuggling — he finds himself in a room with Judge Giovanni Falcone (Fausto Russo Alesi) and starts to talk. Soon, he’s testifying at highly publicized show trials of his ex-colleagues and bosses.

What a show it is, too. Veteran director Marco Bellocchio (Vincere) captures just what a circus those episodes were. One defendant sews his mouth shut with a needle and thread, the prisoners’ wives rain curses on the judge’s children, and Tommaso’s own sister goes in front of TV cameras to say she hopes her brother commits suicide. Buscetta had a way with words that most mobsters do not possess, and the courtroom scenes show what a commanding figure he cut at trial. (A famous moment, re-created here, came when a capo ripped Buscetta in court as a liar, and Buscetta replied, “I expected to hear the roar of a lion, but all I heard was the squeak of a mouse.”) More comedy comes when a fellow mafioso (Luigi Lo Cascio) cooperates with the state and gives testimony in such a heavy Sicilian accent that nobody in this Roman court can understand him. Meanwhile, there’s a palpable feeling of dread underlying all this, as Falcone is never sure whether police officers or even members of the press corps might try to assassinate witnesses. If the movie were only this, it would be vintage Italian opera, with actors all given their own separate arias to dominate the proceedings.

There’s more, though. I’m always interested in how movies depict the justice system in other countries, and there’s plenty here if you share my interest. The movie shows how Italian judges do more investigative work than their American counterparts, and Alesi draws a finely detailed portrait of a slow, patient investigator. You sense that Buscetta opens up to Falcone just because he likes the man. Falcone doesn’t judge the criminal across from him, but neither does he let Tommaso get away with romanticizing the old pre-drug mafia, pointing out that they killed people and shook down honest citizens without any scruples.

In addition to all this, Bellocchio inserts piquant bits of drama, like when Tommaso goes to a tailor to buy a suit for the trial and finds that the other customer in the shop is Italy’s corrupt-as-hell prime minister, Giulio Andreotti (Giuseppe di Marca). Later, when Tommaso is in the U.S. witness protection program, he’s enjoying a nice dinner at a restaurant in New Hampshire when he hears a guy dressed as Santa Claus strum a guitar and sing, “Io sono siciliano, / Un siciliano vero.” Tommaso gets the hell out of there. Bellocchio executes a bravura single-take shot inside Falcone’s car as a bomb kills him, his family, and the cops escorting them. So many gangster movies from America, the U.K., France, Japan, and Hong Kong depict their subjects as glamorous outlaws who turn to crime because the establishment won’t give them a fair shot, but Italy’s versions of these films realize that the mob is the establishment. (So does Scorsese’s The Irishman.) That subversive streak is just one more element that makes The Traitor so compelling. 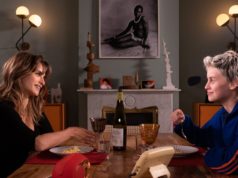