A few months ago, I mused about how new generations have new versions of Little Women to pick over. Why not do the same with Jane Austen? After all, the 18th-century English novelist was a better, funnier writer than Louisa May Alcott ever was, which is no slur on Alcott. Granted, Austen only wrote six mature novels compared to Shakespeare’s 30-odd plays, which is why the boom in Austen adaptations that started in the mid-1990s petered out. Nevertheless, they’re every bit as worth reinterpreting as Shakespeare, and enough time has passed since the old round of Austen movies. Thus, Autumn de Wilde’s version of Emma. (note the period in the title) expands to our theaters this week, and it makes the 1996 movie that starred Gwyneth Paltrow seem downright grungy by comparison.

That’s because of the visuals. I can’t remember the last time a movie plastered so many eggshell colors on the screen. De Wilde comes to us from the world of music videos, and she directs this version within an inch of its life. The schoolgirls at Highbury march across the manor’s grounds in tight formations, the John Constable landscapes accentuating their red robes and bonnets, and I’m not sure whether the reference to TV’s The Handmaid’s Tale is intentional or not. When Emma Woodhouse (Anya Taylor-Joy) paces across the floor in agitation, she does so in a tight circle while her protégée Harriet Smith (Mia Goth) sits by and whirls her head in the same pattern. These actors are blocked so carefully that they seem to be dancing — when they aren’t actually dancing, because this is a Jane Austen film and there will be a neighborhood ball. The performances follow suit, with Emma, Harriet and Jane Fairfax (Amber Anderson) sighing in unison at the prospect of spending an afternoon with the perpetually scatterbrained Miss Bates (Miranda Hart). The tidiness of the filming reaches Wes Anderson levels here.

This might turn into a cartoon if not for a few measures that de Wilde takes along with Booker Prize-winning novelist Eleanor Catton, who adapts the script. For one thing, she keeps us aware of these characters’ bodies, via the effort it takes for Mr. Knightley (Johnny Flynn) to dress the way he does, or for the young ladies to keep those tight curls in their hair. On one wintry night, Emma stands in front of a fireplace and hikes her Regency dress way up so that her ass can receive the heat of the fire. When Emma holds her niece, the humor doesn’t stop at her looking uncomfortable cradling a baby. The baby farts in her arms, causing a panic in the room with Emma’s father (Bill Nighy) and the baby’s parents ordering the servants to fetch different doctors. The film climaxes with Mr. Knightley’s proposal of marriage to Emma, and she has a violent physical reaction to the news that is touching, very funny, and not in the book.

The director also brings home just what a mess Emma makes of everyone’s life by trying to match them up with the wrong person. Paltrow had a better handle on the character’s spoiled, petulant side (and was a better singer, too), but Taylor-Joy is fantastic when emotions start to dawn on Emma, like the horror that sets in when Mr. Elton (Josh O’Connor) reveals that he’s in love with her and the delight she takes when she later meets Elton’s new wife (Tanya Reynolds) and discovers that the woman is an airhead. Then, when Knightley talks crap about Frank Churchill (Callum Turner) — “He uses everybody, and they are all delighted to forgive him! He is a fortunate man indeed!” — you can see his words hit home with Emma, who could be described in the same terms. Were Taylor-Joy not so distinctive-looking, it would be difficult to recognize her as the same actress who navigated horror films like The Witch and Split so well. The bit where she uses her index finger to flick open her carriage window is perfectly in keeping with Austen’s comic spirit.

Any Jane Austen adaptation needs solid contributions from the supporting players, too. Nighy underplays for once, and to pleasing effect as a hypochondriac who keeps feeling an imaginary draft and thinks everyone around him is about to become sick. Hart, whom you may have seen in TV’s Call the Midwife, turns Miss Bates’ meandering speeches into comic arias. Edward Davis and Angus Imrie have no speaking lines as the Woodhouse servants, yet they draw laughs all the same as they scramble to carry out the nonsensical commands of Mr. Woodhouse and his numerous guests. The actors do their own singing and play their own instruments, which leads to a predictable but still funny scene when Emma finds her musical performance blasted out of the water by Jane’s turn at the piano. (Amber Anderson is a fashion model who can toss off Mozart and Beethoven without any bobbles, and I am officially intrigued.)

First-time filmmakers always need good help, and de Wilde surrounds herself with a veteran production team (cinematographer Christopher Blauvelt, production designer Kave Quinn, costume designer Alexandra Byrne), who all respond with the performances of their lives to create this world with so many pastel shades as to take on a surreal quality. This visual stylization makes this Jane Austen adaptation more akin to the great Clueless than to more straightforward adaptations, and makes this into a bright directorial debut. 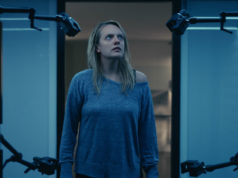