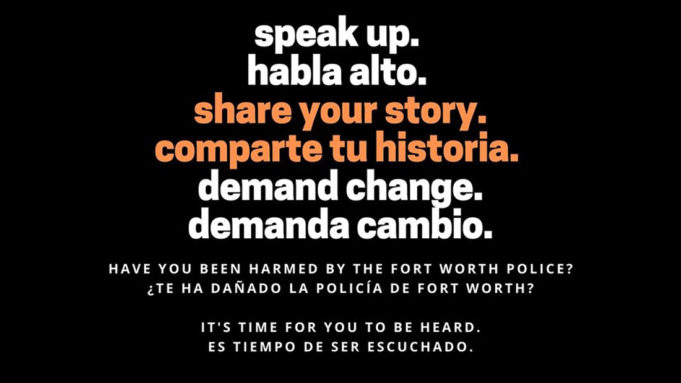 Update: Due to concerns about Coronavirus, the two meetings have been postponed. Testimonials can be emailed to info@policereformexperts.com.

Concerned locals have scant options for voicing personal stories about police brutality. The glazed-over eyes of city councilmembers and the presence of heavily armed marshals do not exactly make for a welcoming City Hall experience.

To create a space where victims of police abuse can speak and be heard, a newly formed police review panel reached out to Pamela Young and the Tarrant County Coalition for Community Oversight. Young’s coalition of reform-minded groups is hosting the first-ever Community Speak Up: Fort Worth Police Misconduct at CMH Events DFW (3220 S Jones St) at 7pm Thursday and 10am Saturday.

The event, which will be free of members of the press and law enforcement, will be a “safe space where people who have been hurt, harmed, and brutalized [by police officers] can speak out and finally be heard,” Young said.

The review panel, which is made up of several police reform experts, was formed one month after a white Fort Worth police officer shot and killed Atatiana Jefferson, an unarmed young black woman, in her home last October. The review panelists, who work across the United States, will receive information from the event but will be unable to attend due to concerns over the Coronavirus, one panelist told us.

Police review panelist Lynda Garcia told us that hearing from community members is a critical piece of the review board’s work.

Young said the recent hiring of two Fort Worth police monitors is a good step, but the city needs to appoint what is glaringly missing from the police oversight equation: a community police oversight board. Many cities have a citizen-guided board that acts to hold police officers accountable, Young said, and there’s no reason why Fort Worth shouldn’t be one of the 175 U.S. cities with some type of oversight board. Garcia, who works as policing campaign director at The Leadership Conference on Civil and Human Rights, said an oversight board can add “accountability and transparency” to community policing.

Young said Fort Worth’s marginalized communities “should be at the table [when discussing the oversight board] because it is meant to serve them. That is where Tarrant County Coalition for Community Oversight comes in. We are fighting, and we will continue to fight to be front and center of what this final oversight program looks like for the city of Fort Worth.”

Testimonials can be emailed to info@policereformexperts.com. Your identity will be kept private.