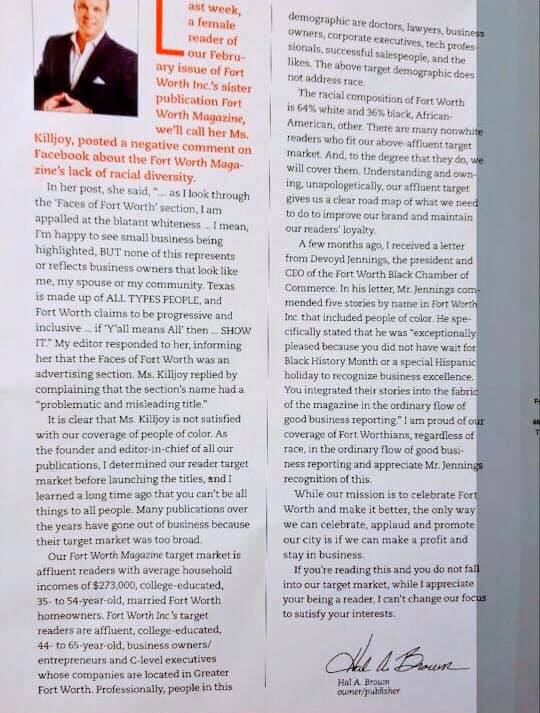 Fort Worth’s working-class men and women are reeling from an economic downturn that is leaving bartenders, hourly wage workers, and others deciding between paying rent or buying food for their children. Even before the coronavirus cacophony swept through North Texas, Fort Worth’s black community was mourning the too-frequent killing of unarmed black men and women by white police officers.

A local glossy magazine owner/publisher has taken the unprecedented levels of economic and societal upheaval to remind his affluent white readership (yes, keep reading) that it’s OK that his publications –– Fort Worth Magazine and Fort Worth Inc. –– ignore topics that are relevant to the non-rich.

“Our Fort Worth Magazine target market is affluent readers with average household incomes of $273,000, college-educated, 35- to 54-year-old, married Fort Worth homeowners,” the owner/publisher, Hal Brown, wrote in this month’s issue of Fort Worth Inc.

Brown was responding to an online complaint by a local woman and artist who goes by the name of Choke. Last month, she made a Facebook comment that questioned Fort Worth Magazine’s lack of diversity, both in regards to its featured photos and content.

“The owner of the whole magazine obviously had a conniption” about my comment, Choke recently said on her Facebook page. He is “basically trashing anyone who doesn’t fit into his target demographic.”

We agree, thin-skinned Brown obviously felt cozy espousing his arrogant, backwater rant from the comfort of his glossy magazine. What he failed to realize was that disparaging the non-affluent members of our community at a time when they are struggling sends a clear message that, as far as his publication is concerned, a large portion of our city is disposable.

“If you’re reading this and you do not fall into our target demographic, while I appreciate your being a reader, I can’t change our focus to satisfy your interests,” Brown wrote in closing his asinine editorial.

Brown also gave us a lesson in white privilege demography. Fort Worth, he said, is “64 percent white and 36 percent black and other.” This is his justification for plastering his magazine with pictures of affluent white people (within the ages of 34 to 54, of course).

Brown has influence with an audience that could effect great change in this community. That he chooses instead to blow smoke up their asses and keep them living in their little comfortable bubbles of privilege is a dereliction of duty, especially now, when the world is unraveling minute by minute, dumb Trump tweet by dumb Trump tweet.

Relegating Fort Worth’s myriad ethnic demographics –– Asian-American, black, Latinx, Native American, and “other” –– into the non-white, unimportant dustbin shows a level of insensitivity and ignorance that is inexcusable, even when white privilege is factored in. And it’s almost always a factor.

While the majority of Fort Worth’s documented and undocumented residents do not fall into Brown’s wealthy, college-educated, homeowner bubble, they do live and work in this city. They pave our roads and mow our lawns. Many of them probably buy Brown’s magazines or at least skim through them at doctors’ offices and apartment lobbies, and many more of these less privileged folks aspire to become business owners themselves.

That “other” demographic does the hard work that keeps this city alive so chosen ones like Hal Brown can highlight the innovators and movers and shakers who take money from affluent white people, invest in projects, and return the profits to affluent white people. It’s a business model that most of us are not privy to, but we do understand more of the inner workings of that world now, thanks to Brown.

The next time we see cover-to-cover photos of married, rich, white 35-year-old homeowners in Fort Worth Magazine, we’ll know why. Or maybe we’ll just walk right by those glossy stacks and spend our working-class money elsewhere.