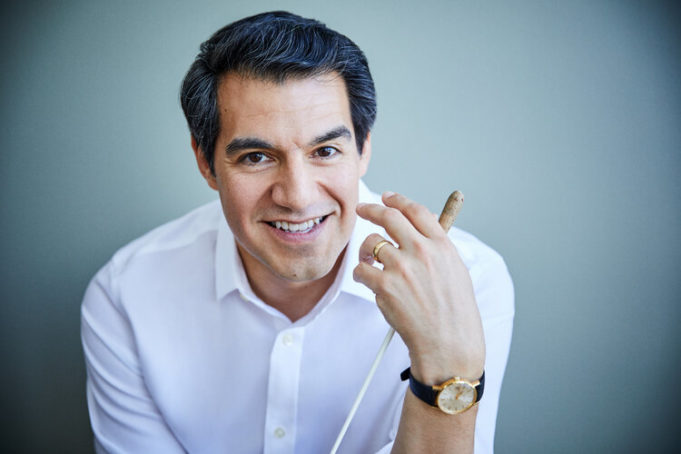 After returning to the States from an overseas conducting engagement in mid-March, Miguel Harth-Bedoya remembered being shocked that U.S. airports were not testing offboarding passengers for symptoms of COVID-19. After spending the better part of a day in a cramped airplane, the music director of the Fort Worth Symphony Orchestra promptly self-quarantined in the bedroom of his Fort Worth home.

Were it not for the pandemic, the end of Harth-Bedoya’s 20-year tenure with the FWSO would have been marked with a crescendo of live performances with the orchestra that has gained a world-class reputation under his baton. His newest venture, the Summer Orchestral Conducting Institute, is led by several faculty members (of which I am a member) who gather each summer to teach emerging conductors a wide range of skills that are needed to lead orchestras and large ensembles.

During a recent online interview, Harth-Bedoya didn’t lament what could have been. The conductor and educator was eager to talk about Fort Worth’s cultural future.

What have you been up to since shelter-in-place was implemented?

I launched free webinars. My goodness, hundreds of people are stranded and wanting to chat about stuff. Today, I’m talking about programming from the music director’s point of view. It’s one day at a time, and I’m glad that I can be of help.

These programs are part of my [Summer Orchestral Conducting Institute]. I will have a few guests, including [virtuoso violinist] Augustin Hadelich. We were able to make a donation fund from the free webinars. We raised nearly $2,000 for scholarships through $5 donations.

Has the shelter-in-place situation changed your thoughts on programming your Conducting Institute?

Now, the institute will no longer just be a summer program. We can offer online opportunities and satellite versions of what we do during the summer so people don’t have to travel.

How are the Fort Worth Symphony Orchestra musicians doing?

What I am hearing is that everybody is healthy. I don’t want to intrude as they adjust. It’s not that they have nothing to do. We are going to organize an online rehearsal without rehearsing. We have never done an online meeting before. Hopefully, that will happen soon.

What is FWSO doing at the moment?

We are doing programs with schools, the young artist competition, and podcasts of recent performances. One program is called Happy Hour with Miguel. I’ll give a Facebook Live talk for amateur music lovers. People can ask me questions.

Half of our administration is working on applying for the federal relief package while the other half is working on The Music Lab. The last weeks have been quite intense. Our CEO, Keith Cerny, has been remarkable.

Are there still plans to hold Concerts on the Garden?

Talk about your transition from FWSO music director to professor and Conducting Institute director.

I’m ending two tenures, one with [FWSO] and a seven-year position with the Norwegian Radio Orchestra. I had a feeling that it would be best to have a clean start. It was a gamble, but if I free myself up, there is room to accommodate something new. I wasn’t contemplating a full-time position that would make us move. The kids want to finish school here.

Now, I will be focusing on guest engagements and a faculty position [as director of Orchestral Studies at the University of Nebraska–Omaha]. It was providential. I will teach two semesters and will continue my guest engagements. People think I travel more than I do. I currently travel about one week a month. Those continuing engagements are important. Having a foot out in the field is important for educating our students.

One highlight of the University of Nebraska is they are interested in an undergraduate [program] in conducting. [Undergraduate conducting programs] exist on paper in two institutions [in the United States], but there are no students enrolled at the moment.

The workload is Monday through Thursday. I’ll probably be home here more than before in a certain way. I haven’t had free weekends for 20 years. It’s exciting.

Why did you create the Conducting Institute?

It is a gateway. We are not trying to teach everything in three weeks. A gateway is the first step, a door you can knock on to see what conducting is about. All of the students are at the same level. There are classes, and I work with them individually. I would never call these masterclasses. This is not a one-time thing.

Next year will be four weeks, which allows just enough time to show progress or to help someone who is stuck.

What challenges do young conductors face?

This may sound shocking, but I think the biggest challenge is watching YouTube instead of studying music and watching conductors in real settings. There is way too much passive information available. It’s a problem. Also, if a young conductor does not know the repertoire by graduation, they are already left behind. Conductors are on the front lines. It’s a very unforgiving profession.

What were your earliest learning moments as a conductor?

I did my undergrad at the Curtis Institute of Music and my master’s at the Julliard School. My first job was as music director of the New York Youth Symphony. We would rehearse once a week. I also became an assistant conductor of the New York Philharmonic. In four years, I conducted twice. [Conductor] Kurt Masur said, “Your main job is to continue learning.” At first, I didn’t get the point. Looking back, my goodness, I saw so many rehearsals. I would say that that part is missing with young conductors today.

This story is not well known. I conducted all kinds of groups during that time. I conducted an all-girl high school orchestra when I was a student [at Curtis] in Philadelphia. I would start at 7:30 a.m. You had to do miracles. You could have one oboe and 10 saxophones, and you had to make music with that. Many of the young generations think [that kind of work is] not glamorous enough.

You know the first thing I conducted in my life? Many people think it was an orchestra. It wasn’t. I helped my mom, who is a freelance musician, with music for weddings, ceremonies, graduations, anything. It could be organ with a choir. It was a single-mom household. I would carry music stands when I was a teenager. One day, we had two bookings at one time. I was 16, so a member of the choir drove me. I was conducting 10 people at weddings. Those were my first conducting engagements. I learned that if you can have people react to you, then you are conducting somebody. If you are only waving your hands, nobody is conducting because they are not paying attention.

There is very little credit given to those kinds of opportunities, from a leadership point of view, these days. People would look down and say they are above that.

What about the last 20 years with the FWSO are you most proud of?

You might expect me to say it’s how the orchestra sounds. Well, that’s the result of the answer. The answer is having created an integrated workplace for music-making. That takes time. There is satisfaction that comes from intense work and heavy work. If you make [working in an orchestra] the place you want to go to and work every day, then the orchestra sounds better. It doesn’t sound better because I tell them or order them.

My job was to motivate every human being in the orchestras who happens to have an instrument. People say I am hiring musicians. No, it’s a person who has a life and a family. You want that person to want to come make music with their chosen instrument. That takes time. If that works, the orchestra will play well and its members will do anything to play better.

To follow the FWSO’s new online events, visit Fwsymphony.org/in-the-community. More information about the Conducting Institute is available at Conductinginstitute.com.