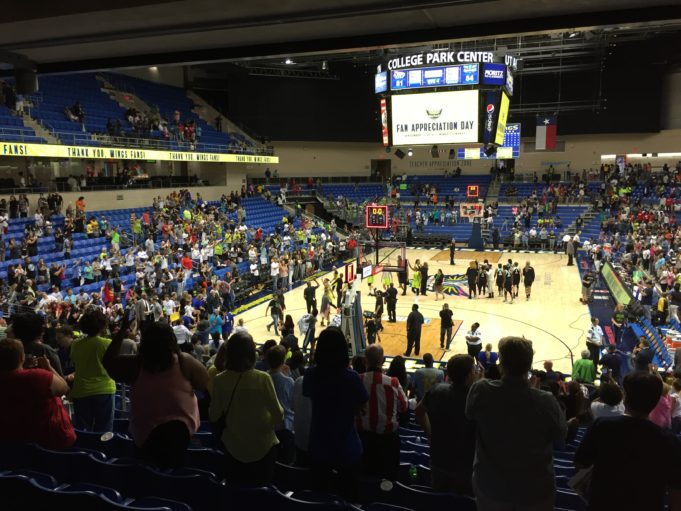 “I don’t think it’s fair to say we’re rebuilding because we are very talented now and I think five or ten years down the road, we’ll be able to look back on this night and recognize how important it was.”

Greg Bibb said that Friday after the WNBA Draft. Bibb serves as general manager for the Dallas Wings and for those in his profession, draft night is one of the most vital days of the year. It’s a chance to add young talent to a roster and the Wings added a lot of it Friday.

The team had been particularly active in the period leading up to the draft, including moving some veteran pieces to acquire more draft picks. The transactions netted three first round choices this year and three more next year. They’ve also picked up young potential standouts Kristine Anigwe, Marina Mabrey, Astou Ndour, and the Samuelson sisters, Karlie and Katie Lou, in their recent dealings. Now they’ve added Satou Sabally from Oregon, Princeton’s Bella Alarie, Tyasha Harris of South Carolina, and Luisa Geiselsöder from Germany.

The Wings have a remarkably young roster. Their oldest player, Kayla Thornton, won’t turn 28 until after the season (if the season sticks somewhat close to its virus-delayed schedule). It’s that youth, and the fact that former All-Stars Skylar Diggins-Smith, Liz Cambage, and Glory Johnson have departed the franchise in the last 12 months, that leads one to think “rebuilding job.”

“I’m not naïve to the fact that this group will have some growing pains because of our lack of experience and because of our youth,” Bibb said. But he believes the learning curve will prove a shallow one because of the club’s talent level and his pedigreed head coach. Sabally, the draft’s second overall pick, also thinks her new team can succeed just like her old one did.

“It really reminds me of Oregon and starting a program from new, setting a new culture, so I’m really just excited,” she said. “I feel like we can really build something great, and Coach [Brian] Agler is really a great coach, has shown in history what success means, and also means to him, and I believe that with the coaching staff and our new players that we will achieve great things.”

“One the great things about playing for Coach Agler is if you put in the work at both ends of the court, execute the game plan that he and his coaches establish, and you’re smart about putting in your work on the court and in the film room, it doesn’t matter who you are, how old you are, you’re going to get an opportunity, and if you make the most of the opportunity, you’re going to continue to get it.”

Agler gave last year’s star rookie Arike Ogunbowale lots of minutes at point guard – not her natural position – out of necessity. Kaela Davis played there some, too. With the return of Moriah Jefferson from injury and the addition of South Carolina’s all-time assist leader in Harris, the team expects to have that position covered. But this year’s new additions will hope to expand Agler’s options even more in any given game or matchup situation.

“I think I bring a lot of versatility. I’m 6-4, but I can stretch the floor. I have good footwork so I can play inside and outside and I can play around with this young exciting team that plays basketball at a really fast pace,” suggested Alarie.

Youth does lend itself to the running game, Bibb notes.

“We’re going to be young, so we should have fresh legs most nights, which would lend itself to being a team that can play with pace and get up and down the court.”

Returnees Jefferson, Davis, Allisha Gray, and Kayla Thornton can all play fast, too. The Wings have also added needed three-point shooting in the Samuelsons, among others. Bibb feels he’s assembled a group full of versatility, energy, size, speed, and talent. And this roster composition also sets the team up well in a league with a salary cap. Young players also don’t cost as much as veterans. That will matter if Bibb’s five-to-ten year retrospective ends up being as positive as he hopes.

“We have a lot of flexibility in a lot of ways. You look at us right now, including on the cap, and we’ll have an opportunity to keep this team together for a long time.”