I heard about Kintaro Ramen and asked to review it this past winter, before the restaurant industry and much else went to hell. The Arlington ramen shop persevered and went on with its March opening, coronavirus be damned, so I have to say that I sampled the food under less than optimal conditions, even though the eatery helpfully included reheating instructions with my takeout order. Having done so, I think that once UTA reopens its doors to students, this shop nearby will be a prime place to grab lunch between classes.

Unlike its compatriots sushi and tempura, ramen never made the leap to haute cuisine and has remained a quick and hearty working lunch to be consumed before returning to the office. In that spirit, the interior of Kintaro Ramen is nice but functional, with tables and a bar of blond wood for people to sit at while they have their noodles. It’s the kind of place that recognizes that the people are here to fuel up and get back on the road or, in this case, to that 1 p.m. physics class.

I ordered the chicken karaage to start. Japan’s local version of chicken nuggets is usually eaten cold in its native environment, but I had one straight from the fryer, and it made other places’ nuggets seem hopelessly unsophisticated. The rice flour coating made the pieces delicately crispy, and the thigh meat was succulent and flavorful. I saved up one morsel in my to-go box to eat after a night in the fridge, and it scarcely lost any of its flavor as a snack. It wouldn’t be the worst idea for Kintaro to imitate Japanese gas stations and keep small containers of these nuggets in a refrigerator case for busy students, professors, and administrators to take out.

The karaage came with a yuzu mayonnaise dip seasoned with togarashi (red pepper powder with black sesame seeds). The dark meat didn’t really need that, but I found it useful for dipping the breast meat that came on top of my torikotsu chintan (chicken ramen). The kitchen did some sort of wizardry that gave the chicken soup the silkiness and richness of the traditional pork broth. I suspect it had something to do with the copious amount of sesame seeds in the bowl. Along with the usual toothsome noodles, the ramen came with the welcome crunch and bitterness of oshitashi (Japanese spinach, standing in for the customary bok choy) and a soy-aged 6-minute boiled egg with a perfectly runny yolk. However, I found the show stolen by the dashi-marinated bamboo shoots, cut more finely than I’ve ever seen, soaking up the flavor of the soup while lending it a caramelized flavor. Bamboo isn’t known for bringing excitement to a dish, but that’s what this brings, and you can even order it by itself as a side dish.

The restaurant’s one non-noodle entree is the ebi furai, which are black tiger shrimp, large and elongated crustaceans with a more saline flavor profile than their fellow shrimp. These were fried up in a feathery panko crust and served with cabbage slaw, two dipping sauces, and razor-thin pickles marinated in sake, vinegar, and sugar. I found the slaw to go better with the creamy mustard dressing, while the shrimp worked well with the thick soy vinaigrette brightened with a pop of yuzu.

Kintaro offers no dessert, and while you could go to the ice cream shop next door, I chose from one of four sake options instead. My bottle of Mio sparkling sake turned out to be like an alcoholic version of Sprite. Purists will probably blanch at this description, but I prefer my sake sweet and found it an altogether pleasant after-dinner imbibe. The bottle comes with individual chilled sake glasses, so even though it’s a single serving, it’s eminently sharable.

My return meal at Kintaro was my first proper restaurant dinner since the lockdown, and I suspect I would have been happy if they’d served me a deep-fried block of wood. I thought about why we go to restaurants: It’s not just about the food. It’s about being freed from the tedium of kitchen prep and the sight of your own dinner table, not to mention the feeling that you’re important enough for someone to wait on. This is what many of us were missing without our restaurants. My server was wearing a face mask and latex gloves, yet as I waited for my food and let my mind wander and took in the fresh air at the one outside table, I felt for just a moment like everything was right with our messed-up world again. How do you put a price on that? 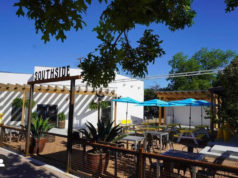 Ramblin’ on the Southside