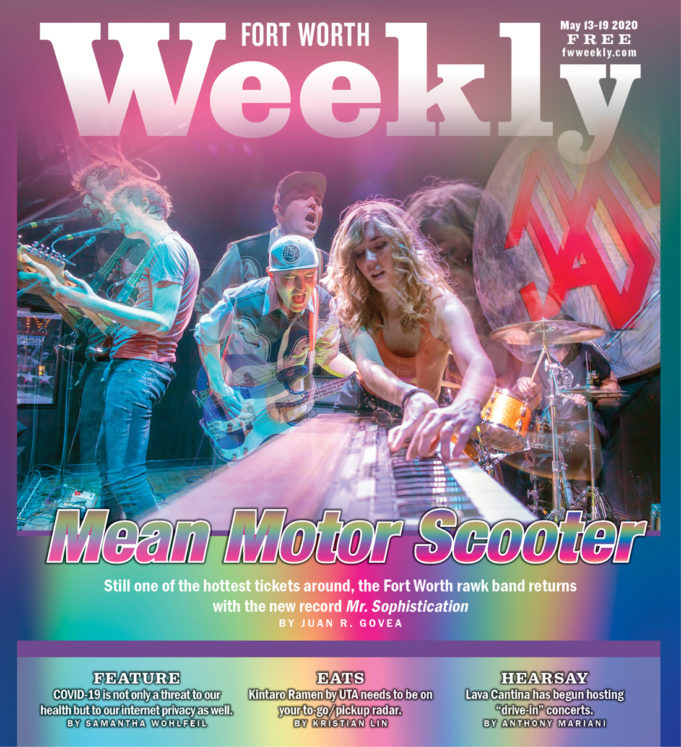 Mean Motor Scooter may be “local,” technically, but the hard-rocking and -popping quartet has fans all over, including France and Spain, where MMS has received some airplay and good press.

Now with the release of the band’s latest recording, the EP Mr. Sophistication, there’s hope that keyboardist Rebekah Elizabeth, drummer Jeff Friedman, singer-guitarist Sammy Kidd, and bassist Joe Tacke can take advantage of their newfound international profile. Too bad a pandemic stands in their –– and everybody else’s –– way.

MMS was scheduled to play the Wildflower! Arts & Music Festival this week in Richardson with Joan Jett, Loverboy, and several other vintage rock headliners, but due to the pandemic, the event was canceled. Locally, MMS was supposed to perform an EP release show on April 11 at MASS. That instead turned into a livestreamed concert from the same venue on May 1. More than 2,100 people have viewed the almost hour-long show.

The average turnout for the group’s North Texas shows is approximately 50 to 100 people on most nights, Kidd said. While touring the West Coast in 2018 and 2019, performing in California and Oregon, sharing the stage with Alternative Tentacles’ The Darts, and meeting the label’s founder, Dead Kennedys frontman Jello Biafra, the group played in front of some pretty packed crowds, Kidd said.

“Releasing an album during the pandemic has been less than ideal, to say the least,” Tacke said, adding that he and his bandmates have been able to pivot quickly to “focus on more streaming and radio stuff.”

Mr. Sophistication was recorded in one day in Fort Worth at Cloudland Recording Studio (Pinkish Black, Ting Tang Tina, Chillamundo) and One Horn Studio (Josh & The Jet Noise, Dome Dwellers). It was engineered by Dreamy Life cofounder Robby Rux (The Cush, The Fibs, Maestro Maya), Elizabeth, and Tacke, who also mixed and mastered it. Now available on digital platforms, including Bandcamp, Mr. Sophistication brings a high-frequency hard-rock pop sound with catchy beats crashing back and forth. It’s more than a well put together EP. Kidd’s screams accompanied by Elizabeth’s high-pitched organ match the ferocity of Tacke’s bass and Friedman’s heavy beats. On “Portals,” lyricist Kidd describes an outward universe longing for explanation, but to no avail. Instead, screeching and wailing resonate in concussive reverb-drenched waves.

Kidd said the nature of Mr. Sophistication is a characterization of the ego as someone seeing oneself in a way meaning to be good or bad or selfless or helpless, adding, “The EP relates to human form and acknowledging the dark shadows inside of us with bad and good elements and certain figures looking at the occurrences while not pretending everything is so black and white all the time.”

Kidd said MMS’ music is “a collage of a lot of different artists that we all listen to. Besides our main influences, we try to stay connected to artists,” including William S. Burroughs and other Beat writers and filmmaker David Lynch.

Part of Mean Motor Scooter’s international profile comes from their record labels. Along with Dreamy Life Records here in the Fort, Dirty Water Records U.K. released Mr. Sophistication. MMS had been working with Dirty Water U.S. before that office closed. Though the EP has been spun locally only on KXT and The Pirate, it’s received airplay overseas on several platforms and outlets.

Mr. Sophistication was part of a planned double-EP release at two separate dates with a future plan to release a vinyl version with the EPs on sides A and B. “That’s what we were talking about doing,” Kidd said, “but we don’t have the funds to put it out right now.”

Kidd is happy with the band’s sound now, especially with the relatively recent addition of Elizabeth, who joined in 2016 right before MMS’ lone album came out. Hindu Flying Machine and the 2016 singles “Naked Brunch/Such a Seducer,” a music video for “Gutterboy Blues,” last year’s TV Baby EP, and two other music videos altogether helped propel the West Coast tours.

“We have no idea what it looks like moving forward,” Tacke said. “It doesn’t look like live shows will be back in any real sense of the word for a long time. Live shows were obviously our bread and butter. They were by far our biggest source of income, and now that’s completely dried up.”