“Stop Six will take you fast,” Derrick says as he slots a key into the front door of the one-bedroom apartment where he stays. “It’s sad. I seen good girls come over here, move in. They wasn’t drinking or nothing, not smoking weed, nothing. Next thing you know, they are sitting around, popping Four Lokos, running the streets. This place, it will take you.”

Derrick is a Day One, which is to say that he was born in Stop Six. 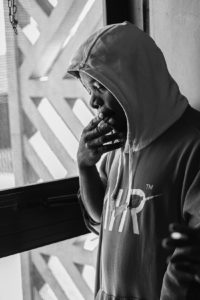 “Growing up here,” he says, “you see people selling dope, doing dope. You see it all. People die over here. Fights, you know. So you get caught up in the mix. You want to be a part of it. You want to be ’hood. The devil be roaming around here, you hear me? Out here, the devil will pull up before God will.”

Derrick turns the key, the metal bolt snaps back a little too loudly, and he elbows the door open.

Two steps, and he is across the tiny living room and into the kitchen. He fiddles with a few knobs on the front of an old oven, gets a spark, and lights a Newport off the front burner.

I unpack my lighting gear quickly. People are already starting to gather in the dim twilight beyond the open door. Word has gotten around. Some photographer is taking pictures. Derrick greets some of the visitors by casually dispensing up-close half-hugs and back slaps, while others, those from The Bricks, receive special, impossibly intricate, coded handshakes.

A little more than four square miles in total size, Stop Six is a complex place, one where the street you grew up on matters. There is a kind of geographically based caste system at work here. Sure, anyone can be a Blood, but only a select few, by accident of birth and family address, can be a Truman Street Blood. Derrick isn’t a Truman Street Blood, but he is from The Bricks, the projects, specifically the 4900 block. The Stop Six caste system is so atomized that even something as small as a block of the projects has its own handshake, culture, and history.

Patricia Benjamin, known throughout the neighborhood as Miss Pat, is the first to sit down. Flanked on either side by white-hot studio lights, she tugs on her wig and takes such a deep drag on her Newport that a solid two inches of cigarette is instantly turned into ash. She begins to talk as I snap away, telling me about watching her father abuse her mother, about how her mother took a knife to him one night, and about how their divorce left her confused and hurt.

“I just want somebody to love me,” Benjamin says. “They say they do, but they have a strange way of showing it. One minute, you cool with me. Next day, you don’t want to be bothered. Say bad things about me, things that hurt. Then you come back and say that you didn’t mean to say it. I don’t know what to believe.”

Benjamin sucks on her cigarette until the filter begins to smolder and announces, “OK, that’s enough.  No more tonight.”

The room has filled up fast.  Benjamin has to do some pushing to get out of the front door.

“I ended up over here by the grace of God,” Sheri Samuels tells me after I finish taking her picture. “I was homeless for two years, living in my truck. They tried to take my oldest son, Zay, but he wouldn’t go. He never left my side. I cried every night. I told my son to leave me, go with your friends, and he did. But that night, he was right back, telling me, ‘Mama, I’m not leaving you.’

Samuels continues, “One day, my sister snuck me into her house. She snuck me in and closed the door, and all of a sudden, I just started crying because I knew I had to get back out to the truck [where we were staying] in that cold. I heard this voice say, ‘Stand still.’ The voice sounded so real and so loud. The next day, a letter came in the mail. I got my housing. Now, we got a roof over our heads.”

Blessings and curses come mixed so close together in Stop Six that it is difficult to tell them apart. An abusive father is forced out, but the hurt lasts, causing pain that continues for decades. Any place where 40% of the population lives below the poverty line and the murder rate is 37% higher than the national average can feel cursed. Talk to any Stop Six resident long enough, and the conversation will always, without fail or exception, include the phrase “they were killed right over there.”

Sometimes “right over there” is the patch of gravel behind what was a red-painted liquor store that now stands abandoned, its windows boarded up and a “no trespassing” sign posted on the locked front door. A girl was found there, behind the red store, shot to death, lying in the gravel. “It was a long time ago,” Slim tells me as he looks into my camera. “I don’t remember her name anymore, but that’s where they found her.”

Sometimes “right over there” is Village Creek Park, a small green space to the south of Stop Six where five people were injured on Mother’s Day by gunfire. “They are calling it the Mother’s Day Massacre,” says Zay, Sheri Samuels’ eldest son, the son who wouldn’t leave his mother’s side even when it meant sleeping in the cramped cab of a truck.

The blessing of Stop Six, though, is created by what that pressure, what that grind, what that struggle creates: resilience and community.

I began photographing Stop Six almost a year ago by documenting the closing down of the projects, and like so many of the people who came to Stop Six, I got caught up in the struggle. The pride that the people have in their community and their heritage is strong, as is their grief and pain at the violence that has torn so many of their families apart. It is this complex mixture of pride and pain that I have spent hundreds of hours endeavoring to capture.

Stop Six is changing. The Bricks are all but gone now, empty shells waiting to be bulldozed. In a matter of months, there will be no new project babies to teach the 4900-block handshake to. How much more about Stop Six will change? I wonder as I pack up my camera for the night.

“No matter where I go or how far away I am,” Derrick tells me as we break down my equipment, “my feet always bring me right back here. There’s good people here, working hard against that struggle.”

That, I know, will never change.