Netflix is pushing Dark pretty hard since airing the third and planned final season of the acclaimed German science-fiction show. If you’ve heard anything about it, likely it’s that Dark is similar to that other Netflix program Stranger Things, whose first season started airing while the first season of Dark was being filmed. Indeed, the two programs share a ton of similarities: mysterious child disappearances, supernatural occurrences, ’80s nostalgia, teenage hormones. The main difference is that the German series is a lot less cute and a lot more metaphysical. In other words, German.

Another difference is a timeline that would turn Christopher Nolan green with envy. The series begins in November 2019 in the fictional town of Winden in southern Germany, which is almost wholly dependent on a nuclear power plant. With the town reeling from the vanishing of a teenage boy, some of his friends try to dig up his stash of drugs hidden in a creepy cave in the forest, because this is a German story and there has to be a forest in there somewhere. When evil-sounding noises start emanating from the cave, the kids scatter, and in the confusion 11-year-old Mikkel Nielsen (Daan Lennard Liebrenz) disappears as well. The police — with Mikkel’s distraught father Ulrich (Oliver Masucci) among them — launch an exhaustive manhunt, while the conscience-stricken teens, two of whom are Mikkel’s siblings, do their own investigating. Chief among them is Jonas Kahnwald (Louis Hofmann), who discovers a passage that transports people through time in increments of 33 years.

The show takes us through several generations of Winden’s families, and you might need a family tree to keep everybody straight. (Then again, one character discovers that she has given birth to her own mother, so maybe that wouldn’t help so much.) Other characters follow Jonas down the wormhole, and at one point there are three separate versions of Jonas’ girlfriend and Mikkel’s sister Martha (Lisa Vicari) running around. The producers haven’t skimped on production values, staging scenes in periods ranging from 1888 to a postapocalyptic 2053. Jonas spends a good chunk of the series trying to nullify his own existence by preventing his father from going back in time. Later, he finds out that he and Martha are Adam and Eve, but what are they the start of?

If you’re used to American TV, you may find this a little light on action, which the show might have used to cut all the discussion about the mechanics of time travel. I also could have done with fewer shots of people sitting bolt upright in bed after nightmares. Even so, series creators Baran bo Odar and Jantje Friese do quite well weaving the physics discussions in with the soapy drama of the domestic lives of Winden’s citizens, as Jonas and Martha’s friend Franziska (Gina Alice Stiebitz) fumes after discovering that her father (Stephan Kampwirth) is a regular client of a transgender prostitute (Anton Rubtsov) who lives at the edge of town. The script is chockablock with references not only to Back to the Future and The Matrix but also to the Greek myth of Ariadne and Goethe’s Elective Affinities — and here I thought I’d read that book in college for nothing. Some actors with international profiles like Antje Traue and Sebastian Hülk appear here, but the standout in the cast is Vicari, who looks like Jennifer Lawrence and has the same angry smolder. Oh, and remember that old philosophical chestnut about what if you could go back in time and kill Adolf Hitler as a baby? One of the characters does something like that, and not only is it horrible, it doesn’t even work.

Shows like this frequently go up their own ass with crypticity for its own sake, plotlines that dead-end, and secret organizations behind the secret organizations. This series is an extraordinary machine, as every plot detail is perfectly planted, such as Ulrich leaving his smartphone in 1953, to be found by a clockmaker (Arnd Klewitter) who uses it to build a time machine. Dark works quite well as a teen romance on a grand Wagnerian scale, as Jonas and Martha’s love is so powerful that it literally destroys worlds. The show’s characters think they’re free to pursue what they want, when in fact, what they want condemns them to repeat the same patterns through the decades and in parallel universes. (Ah, the Arthur Schopenhauer of it all!) The program’s best episode is its final one, tracing the wormhole’s origin to that clockmaker and a terrible loss that he suffered. After seeing so many dysfunctional families, Jonas and Martha’s work to heal the rift in this man’s family is deeply moving. Let’s see Stranger Things top that. 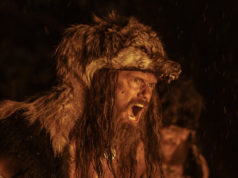 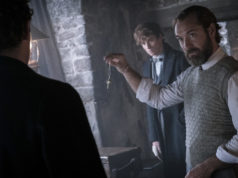