On an unseasonably hot Sunday afternoon, a few dozen cars and trucks filled an Eastside parking lot to launch the Atatiana Jefferson Celebration and Parade. Each car was adorned with blue streamers, posters taped to doors, and letterings on windows that called attention to Jefferson’s killing by Fort Worth police officer Aaron Dean one year ago.

Dean arrived at Jefferson’s mom’s house in response to a non-emergency call that reported the front door of the house had been open all day. Dean shot through a window, striking and killing Jefferson. Dean posted bond shortly after and is currently awaiting trial.

Several relatives of victims of police violence gathered that day, including Kevin Tarver, father of Darius Tarver. The 23-year-old was completing a degree in criminal justice from UNT when four Denton police department officers shot and killed him. Darius had developed erratic but nonthreatening behaviors after suffering a head injury in a car accident, Kevin said. Four officers were called. Body camera footage corroborates Kevin’s description of what happened next.

“Before he comes downstairs, one officer said [Darius] is going to be an aggressive one,” Kevin said. Darius “was holding a frying pan, and on the pan was a meat cleaver. [Darius] said, ‘My heavenly father, my only lord and savior.’ He was praying. They said he wouldn’t comply. They tased him. Then, they allow him to get up instead of them restraining him. When he walks toward an officer, they shot him two times in the chest.” 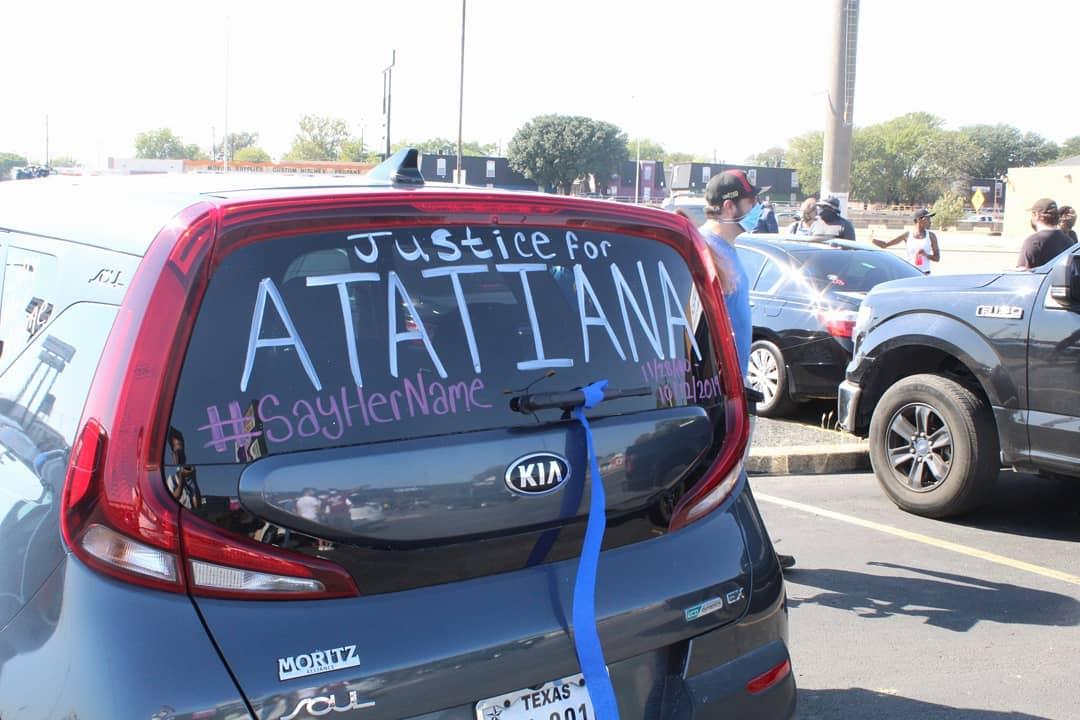 Kevin, a chaplain with the McKinney police department, said the effort to hold the officers who killed his son accountable has been roadblocked by Denton’s police chief Frank Dixon and members of the Texas Rangers, who are charged with investigating public corruption. The Rangers have been under increasing scrutiny by civil rights groups and at least one former Texas Department of Public Safety investigator who say the Rangers turn a blind eye to misconduct by fellow Rangers.

Around 4 p.m., the car caravan set off to the home of Jefferson’s mother, where Atatiana was killed. Several speakers that day reflected on Jefferson’s life and the work that lies ahead. Ashley and Amber Carr, Jefferson’s sisters, spoke early on. 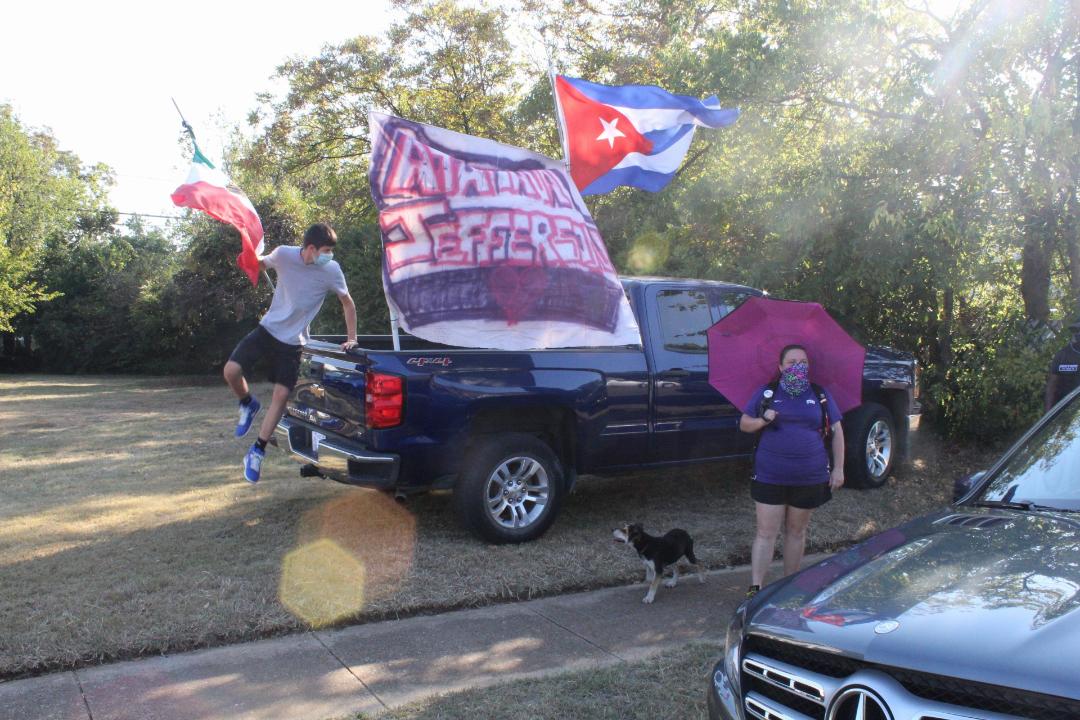 “I just want to thank y’all for coming out to support us,” Amber said. “Follow the Atatiana Project on social media.”

This has been hard, Ashley said.

“We haven’t been able to process anything because there hasn’t been progress in the trial,” Ashley said. “There is not a day that we don’t cry for my sister. It was tragic. My sister was amazing. We are from Oak Cliff. Our grandma used to say that we are in the ’hood but we are not of the ’hood. Atatiana, she stood by that. She never stopped from dreaming big. For her life to be taken so tragically, all that hope and dreams are gone. We are not going to let her dreams and hopes die. That’s why we started a nonprofit, to make sure that our sister’s name keeps going.”

Donations to the Atatiana Project, a nonprofit that aims to provide science, technology, engineering, and mathematics (STEM) classes from the home of Jefferson’s mother, can be made at: AtatianaProject.org/donate. 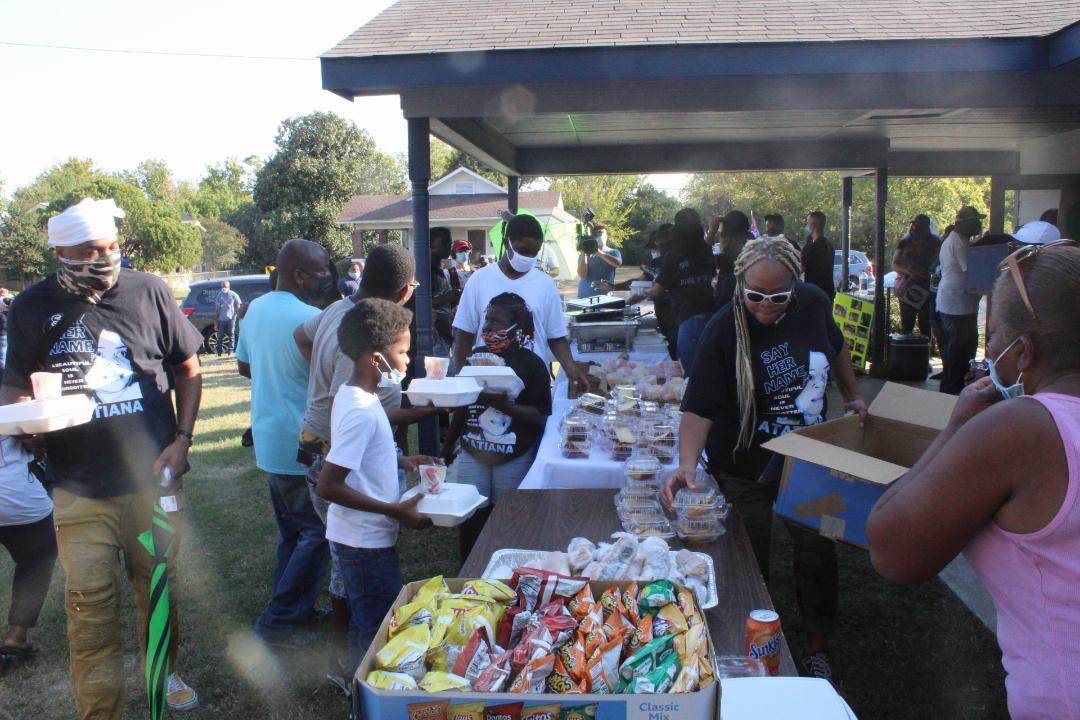 Nysse Nelson, protest leader with Enough Is Enough, spoke about what she said is the criminal justice system’s prejudice toward Black men and women.

“We had a Black queen right here in front of us who wanted to be a doctor,” she said. “But who was there to save her life? Who trained officer Aaron Dean? When a Black person commits a crime, there are Zoom meetings sentencing them. But we have a criminal by the name of Aaron Dean loose in the streets who has not been brought to the table for punishment. We should not be standing here wearing these shirts because she should still be here. We can’t let this go silent. We can’t let it be buried.”

Several speakers that late afternoon called for Mayor Betsy Price and District Attorney Sharen Wilson to be voted out and replaced with leaders who will hold police accountable when unarmed civilians are shot or killed.