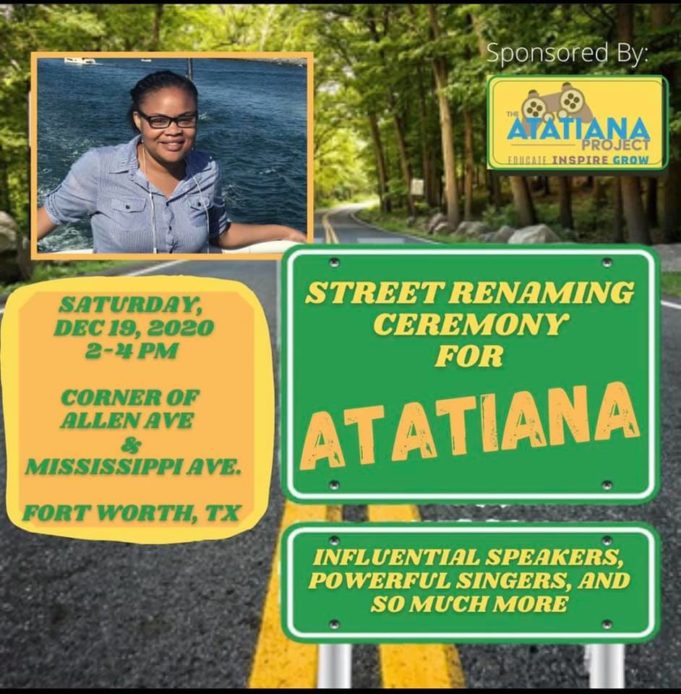 Beyond fighting well-funded police unions, tight-lipped district attorney offices, and apathetic public leaders, families of victims of police shootings often struggle to keep the names of deceased loved ones alive and in the public consciousness. The family of Atatiana Jefferson — the 28-year-old Black woman who was shot and killed by Aaron Dean, a white Fort Worth police officer, last year — will soon have one more tool to continue the family’s push for justice.

Saturday’s naming of the Atatiana Jefferson Memorial Parkway (2-4 p.m. at 1203 E. Allen Ave.) marks a significant milestone for friends, family, and supporters of Jefferson. The event flyer promises influential speakers, powerful singers, and “so much more.”

In October, Fort Worth City Council unanimously voted to approve the honorary naming of the main thoroughfare that runs through Fort Worth’s Hillside Morningside neighborhood where Jefferson was shot and killed after Dean fired through a back window without announcing his presence.

“Very much appreciated, but we ain’t settling!” said Amber Carr, Jefferson’s younger sister, on Facebook following the city council vote. “This is not justice. This is honoring a life that should still be here.”

For the Carr family, justice will be served only when Dean is held accountable for killing Jefferson. The officer has been indicted for murder, but a trial date has not been set. Peace officers rarely face charges for shootings that result in the maiming or killing of unarmed Black and brown men, women, and children. Since 2015, more than 5,000 people have been fatally shot by police officers in the United States, according to The Washington Post, and Black Americans are more than twice as likely as white people to be killed by a police officer.

Carr said Mayor Betsy Price has not spoken at length to the Carr/Jefferson family.

“I would like to tell her that my personal opinions are to defund the police department and use that money to help the Southside community” where Jefferson was killed, Carr told us in October. The Southside, she continued, “need a reconstruction, a whole revamp.”

Jefferson’s mother, Yolanda Carr, died around three months after the shooting, leaving the Southside home where the two lived together abandoned. Squatters and looters subsequently vandalized it. Rather than expressing anger at the trespassers, Carr blamed economic disparities and the area’s lack of public resources for the home’s looting. Carr said the squatters ate all of the food supplies in the home. The fact that people were willing to break into a home for food points to a lack of public resources in the area, she said.

The Carr family is working with local musician Jeff Dazey (see this week’s music feature) and other volunteers to raise funds for the Atatiana Project. The nonprofit will repurpose Yolanda’s home (and a nearby vacant building) to provide STEM courses for youths in and around Hillside Morningside.  Donations can be made at AtatianaProject.org.