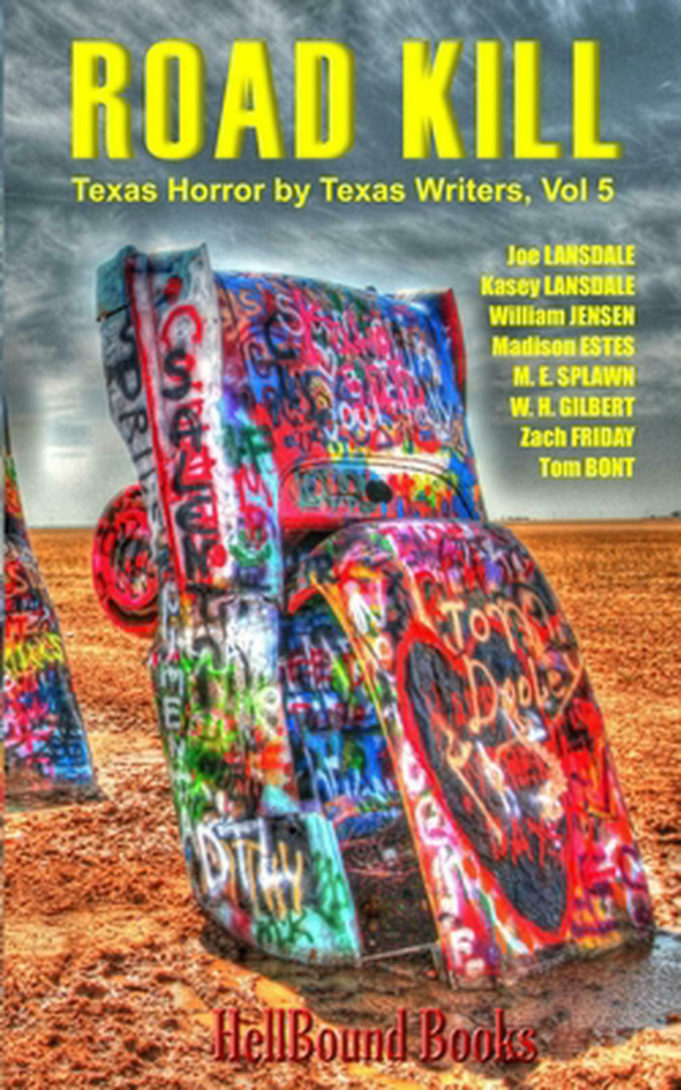 Road Kill: Texas Horror by Texas Writers, Vol. 5 is an immersive, haunting collection of short stories that are as thought-provoking as they are frightening. The worldbuilding in each of these stories will pull readers in, holding their attention until the last word. Every piece carries a strong sense of place, many of them masterfully steeped in Lone Star detail, grounding the reader in hometown familiarity before unleashing the inevitable Texas-sized chaos.

But let’s back up a bit so I can set the stage. I read Road Kill, Vol. 5 over a cold, rainy week in October, with my teenagers going in and out of the house almost as frequently as the weather changes here in Texas. Snuggled safely into a fuzzy blanket with a steaming mug of hazelnut coffee, I took notes about each story as I made my way through the eclectic collection. (As a coffee lover, I would be remiss if I didn’t immediately mention Mario E. Martinez’s “The First Cup,” a tense read about a father and son hunting trip. I won’t give away the ending, but I might never think of coffee in the same way again.)

Compiled and edited by Weekly contributor E.R. Bills, Road Kill, Vol. 5 touches on almost every aspect of the horror genre. Some stories — like the quirky and unexpected opener “+ 30 Seconds” by Madison Estes — make exhilarating haste in their delivery of the horrifying element. Other titles — such as the compelling “Dark Hill Run” by Kasey Lansdale and Joe R. Lansdale and “The Hermit” by Zach Friday — take their time, using exquisite character development and setting to increase tension.

It should come as no surprise that a good number of the stories feature paranormal activity in some form or fashion. For example, “The Exorcist Camera” by M.E. Splawn offers a distressing spiritual window into a demonic infection affecting all who view the video of a past exorcism in the church’s archives. Splawn’s use of Catholic detail lends credibility to the narrative, making the spiritual warfare of demonic influence all the more terrifying.

“Abuela’s Legacy” by Armando Sangre takes place after the death of the main character’s grandmother, who has yet to move on into the afterlife. “Last Summer” by W.H. Gilbert explores the terror of a seemingly innocuous bible camp, a coming-of-age tale that beautifully captures the awkwardness of youth and the dread of public shame. Tom Bont’s “The Man with the Suitcase” is written in letter format as the protagonist seeks spiritual help from his priest about the irregular occurrences he encounters during a stagecoach route, with a terrific twist ending that will leave readers stunned. And Bret McCormick’s “Eleanor’s Jar” draws on occult rituals and dark family secrets as told from the point of view of a man whose young son finds an old séance artifact in their cellar.

Sometimes, though, the greatest horrors are those that emerge from the human condition — the atrocious things that people can do to each other. In many cases, these are the stories where we as readers are afraid to sympathize with the villain — who is sometimes one and the same with the protagonist — because of what we might find in the dark recesses of our own hearts. William Jensen’s “Diamondback Break” is told from a killer’s perspective, really getting down into the nitty gritty of what it’s like to murder another human being. In “Rugby Players Eat Their Dead,” Dane Fayle and E.R. Bills deliver a grotesque tale of past secrets from a road trip gone wrong coming back to haunt a group of friends. And John Kojak’s enjoyably repulsive “Serial Killers Anonymous” is perhaps the most on-the-nose title of the volume, taking readers into the company of those who enjoy serial killer trivia.

Those who appreciate the great outdoors will revel in Corey Lamb’s “The Lake,” a well-written, gripping tale of a fishing trip gone awry, testing the characters’ bounds of sanity, and the dialogue-driven “Phantom Limb” by Tytus Berry takes a philosophical, even theological look at what gives a being a soul.

From disquieting gothic imagery to modern slasher lore and everything in between, horror fans will not be disappointed. This volume has it all.

Anna L. Davis is the author of the cyberpunk, sci-fi thriller Open Source (2015).

Edited and compiled by E.R. Bills