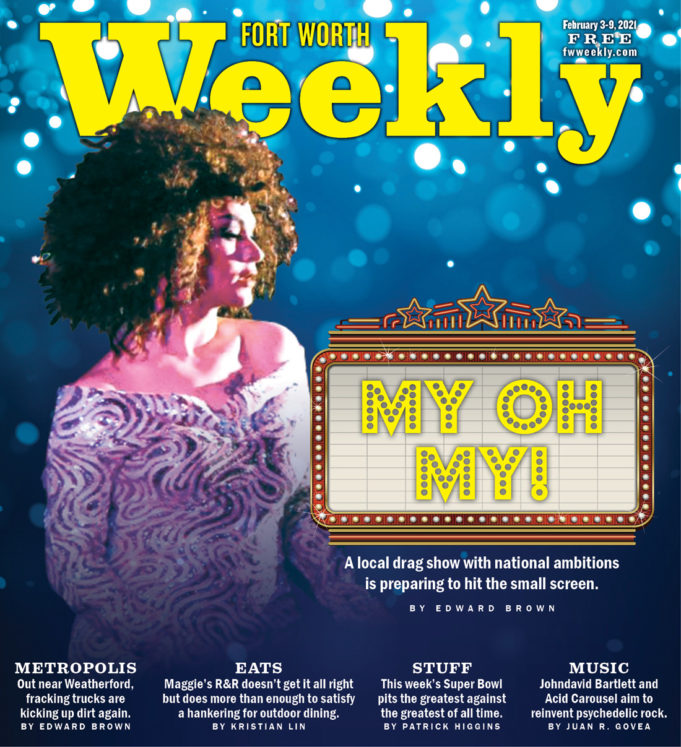 “Who’s ready to have a fun night?” Robert Burke asked the cheering crowd. “Our emcee for tonight, Mr. Patrick Mikyles!”

As “Purple Rain” blared through nearby speakers, Mikyles, draped in a glittering purple cape, lip-synched to the Prince hit while strolling around the main stage. Mikyles waited for the downbeat of the chorus to drop the cape and reveal a skintight purple outfit with a see-through back that did not conceal his rear end. The crowd of largely twentysomethings went crazy.

Mikyles was hilarious as a host that evening. It didn’t take long for him to zero in on two women who were each having their bachelorette party.

“Two bachelorette parties tonight?” he said. “No pressure. I need a Fireball shot. Who is ready to see some more drag? Let’s hear it for Miss Lady Monroe.”

Bursting out from behind the back curtain came a tallish, thin, white dancer wearing a white leotard and a white scarf made with faux features. Lady Monroe’s movements were in lockstep with the upbeat dance music as the audience hooted and hollered. Dollar bills flew through the air at times, and a handful of audience members braved the dance floor to bust moves alongside the drag performers. Dancers Bronx Davenport and Letha Jecktion also gave energetic performances. Each entertainer returned transformed via an entirely different costume and matching persona. By the end of the hour-long session, the dancers had worked the crowd into an ecstatic frenzy.

The name of this weekly show is My Oh My, and it is preparing to reach national audiences following a live recorded session on Sunday, Feb. 21, at The Haltom (5601 E. Belknap St., Haltom City, 682-250-5678). The nearly six-year-old event that runs every Saturday evening at Red Goose Saloon downtown is slated to appear on Channel 21 at 1:30 a.m. on Sunday mornings. Two TV stations outside of the North Texas market have expressed interest in running the program, and a national syndicator of shows has expressed interest in having the series broadcasted nationwide, said Robert Burke, the concept’s founder.

The plan is to film every six weeks. Each recording should have enough material for three to four 30-minute episodes, Burke said, and each televised show will have a new cast of performers.

“There is so much talent here in Texas,” he said. “We haven’t had to look outside of Texas for our show.”

Burke, who grew up and lives in Fort Worth, said he wants to grow My Oh My while keeping it local. Over the past five years, the fan base for drag has grown significantly, he said. Whereas the majority of My Oh My attendees were first-timers to the gender-bending performances when the series launched, around half of fans are now repeat customers, Burke said.

Burke never set out to be a mover and shaker in the world of drag, although he genuinely enjoys working with the performers and he loves seeing the unbridled laughter and joy the performances bring to audiences. His first run-in with the gender-bending entertainment was in 2002 when he bought a nightclub in Las Vegas and needed some kind of act to draw a crowd. The venue’s manager suggested a drag show.

“I had never been to one, but I was open to it,” he recalled.

The risk paid off, Burke said. By the second week, there was a line “out the door.” During conversations with a manager at House of Blues Dallas in 2015, the idea of organizing drag performances came up. RuPaul’s Drag Race was popular at the time and remains so, but Burke noticed that most drag shows in Dallas were held late at night and only in gay bars.

“I thought, ‘There had to be people who’d love to see these shows who wouldn’t necessarily go to a gay bar or to stay up that late,’ ” he recalled.

Over the next five years, Burke experimented with various dance clubs and music venues. The House of Blues’ late-night events were mildly successful with 30 to 40 people. On Labor Day Weekend that first year, the show packed out.

“I realized the next day was Labor Day,” Burke recalled. “All these people didn’t have to go to work the next day. It proved there was an audience for this type of show and that we needed to do the shows earlier.”

In 2016, Burke moved My Oh My to the Dallas dance club Lizard Lounge. One of the co-owners was skeptical of the show’s ability to draw a crowd but gave Burke a shot. Since the performances would start at 7 p.m. on a Saturday, the event didn’t conflict with the late-night dance crowds the venue relied on.

“I’ll never forget that first night,” Burke recalled. “We packed the place out. I was sitting down, and the same co-owner came over and put his arm around me. He said, ‘Once you got started, my employees started calling me. “It’s a good crowd,” they told me. After the fifth one called me, I had to see what this was about.’ ”

The co-owner left saying that he wanted to host the show every month. My Oh My had an eight-month stint at the Northside bar Cassidy’s before finding its current home at the Red Goose Saloon in September 2019. Chris Hutchinson, who owns the downtown bar, has been very supportive of My Oh My from the beginning, Burke said. After several months, it was once again selling out every Friday. Then came the pandemic.

The lockdown, Burke said, was a catalyst for heading to TV.

“People are afraid to go out like they used to,” Burke said. The TV show will allow them to “sit at home and watch the performances. One of the entertaining things about the My Oh My show is audience participation. Garth Brooks can sing on Zoom, and it is still entertaining. With drag, you need to have that audience reaction.”

In September, Red Goose resumed hosting the drag performances, although with a much smaller audience for public health reasons. The current plan is to film My Oh My every six weeks. Burke said that fans of the live events and upcoming televised series can expect a “cleaner show” than a typical event. Yes, off-color jokes and sexual innuendo abound at the weekly performances, but grandmothers and children regularly attend and do so comfortably, Burke said. And it’s not just the fans who have made My Oh My a success, he added.

The past year has hit the drag show industry hard, he said, estimating that around half of his performers typically perform drag full-time. The return of My Oh My means that some of those dancers can go back to making a living at what they truly love and train hard to do, he said.

Drag performers are, at their core, entertainers, Burke said. “They bust their butt to entertain the audience.”

The year and a half of shows at the Red Goose is paying off, he added. Having My Oh My filmed in his hometown has personal meaning to Burke.