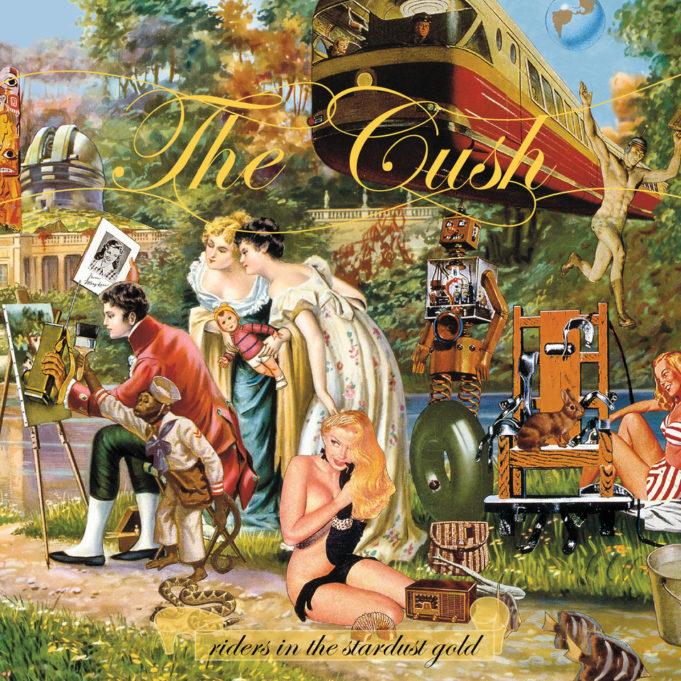 Riders in the Stardust Gold

After a five-year hiatus, The Cush commemorate their return to music with Riders in the Stardust Gold. After spending several years in Vermont, the married pair Gabby and Burette Douglas have joined drummer Austin Green (Telegraph Canyon) and guitarist Ben Hance (Secret Ghost Champion) in recording their new EP. Landing somewhere between cosmic surf and psychedelic rock, Riders delivers on the grungy psychedelia that fans of the veteran psych-pop duo will have come to expect.

Riders in the Stardust Gold is by no means concise. Sometimes averaging well over five minutes in length, each song is an odyssey. The whole record is an experience. It’s easy to get lost in, and the longer, jammier tracks build anticipation for what performance of these songs could look like when The Cush resumes touring. It is very easy to mentally place oneself in a smoky little venue when listening to this record. It’s candy for the mind’s eye.

At the core of The Cush are the Douglases, who have been making music together for over two decades and are no strangers to the psych-pop scene. This comfort with their craft is evident in record’s settled tone. It doesn’t try too hard to be one thing or another. It straddles genre lines. It simply is. The whole mood is very relaxed and unpretentious. This simplicity makes for a listening experienced unblemished by the impulse of comparison. This bold indifference to being categorized makes for an EP that is confident and extremely tasty.

Riders opens with the single “Haters,” which stands out as being tonally separated from the rest of the tracks. While the psych themes of the rest of the record still flow through “Haters,” the song has more of a folksy, dark Americana vibe. It’s stripped down and simple, with that mystical quality usually reserved for mountain cabins. It’s not only sonically unique just within the context of Riders in the Stardust Gold. The track boasts a smart individuality that is impossible to box into a single genre. Fans of Fleet Foxes, Mazzy Star, and the Brian Jonestown Massacre will find themselves right at home listening to it.

The rest of the record is full of groovy percussion and driving bass melodies that provide a grounded and steady energy that complements that heady psychedelic quality of the guitars and keys flawlessly. The rhythm section is on display in a major way on this EP. This, juxtaposed with the saccharine bite of the vocals, especially those provided by Gabby, make for an absolutely stellar, fully immersive listening experience.

The Cush recently signed with Ben Harper’s Mad Bunny Records. Gabby and Burette had been fans of the Grammy-winning singer-songwriter long before they connected through long-time mutual friend and were ecstatic to find that he loved their music and wanted to work with them. The album was recorded at Eagle Audio (R.I.P.) on the Near Southside and Empire Sound in Dallas, with very few modifications made to the original work apart from one important edit that changes the feeling of the whole record. “Haters” was originally written and sung by Burette, but Harper was curious hear how it would sound with Gabby tracking the vocals instead. The result elevates the haunting, siren-like quality of “Haters” and creates a unique and indelible soundscape.