As of Sept. 1, health-care providers in Texas have had to explain to many patients why they cannot have an abortion. Marva Sadler, senior director at Whole Woman’s Health, a clinic that provides abortions among many other services, has experienced this first-hand.

“It’s been a mix of frustration to begging and crying,” she said. “Our patients knew coming into the clinic that this [law] was coming, but it didn’t seem to make a difference when you got to that point of the ultrasound when you can see the heartbeat and had to tell those patients, ‘This is what we were talking about.’ ”

The “this” in question, SB 8, bans abortion after a fetal heartbeat can be detected. Cardiac activity usually starts around six weeks, long before most people realize they are pregnant.

Under the law, government officials do not enforce the ban: citizens do. SB 8 deputizes people to sue anyone who performs or “aids or abets” an abortion after six weeks. Vigilantes could stand to win at least $10,000 in these lawsuits.

In a press call, Marc Hearron, lead attorney of a lawsuit to stop the ban, said SB 8 “creates a vigilante scheme” and “hijacks the Texas state court system.”

In the same call, representatives from Planned Parenthood and Whole Woman’s Health confirmed that they are obeying the new law. They are accepting patients who have no fetal cardiac activity and telling the rest they must leave the state to obtain an abortion.

But even with nationwide fundraising efforts, leaving the state is not an option for many, Sadler said. “There are no resources to help them not lose their job, there are no resources for childcare for the single mother who has three children, and we’re not talking about the fact that we’re still in the middle of the pandemic and many cannot travel.”

Those who cannot travel out of state for an abortion may have to carry out an unwanted pregnancy, which can be exorbitantly expensive and incredibly psychologically damaging.

Sadler said the Fort Worth clinic is the busiest of the national organization’s four Texas locations. The clinic typically completes 90 to 120 abortions a week.

On Aug. 31, clinic staff worked until 11:56 p.m. to provide abortions before the law took effect.

She described the scene as “very busy and a little scary” and a “mad dash for the clock, for lack of better words.”

The next day, clinic staff had to turn away more than half of the 20 women who arrived.

Even though the clinic has complied with the new law, staffers now worry about finding themselves defendants in lawsuits.

“There’s definitely a real fear now of being targeted by the folks out on the sidewalk,” Sadler said. “Those folks have been deputized to become bounty hunters.”

“Folks out on the sidewalk” refers to the protestors who stand in front of the clinic almost every day. 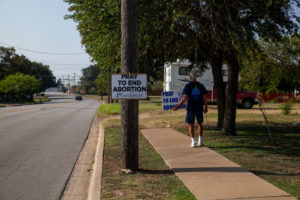 Mark is one of them. The Fort Worth retiree who declined to give his last name stood watch the morning of Sept. 2, just as he had Monday through Friday for the past 18 months, he said. Mark said he believes human rights begin at conception, and he felt “called as a Christian” to pray for those going to the clinic and to try and dissuade people from getting an abortion. To Mark, the Whole Woman’s Health Clinic was taking on a huge liability by staying open. However, he himself does not feel called to litigation, he said.

Those who initiate lawsuits do not need to prove any personal connection to anyone they sue.

The law makes no exemption for victims of rape, incest, or child sexual abuse. It only provides a provision for women for whom the pregnancy would be life-threatening.

President/CEO Laura Hilgart of the local nonprofit The Women’s Center issued the following statement: “To not to be able to provide a list of resources for all pregnancy options when asked by people who find themselves pregnant as a result of their victimization puts us in an untenable position.”

Texas cities and other states have tried before to outlaw abortion after six weeks, but those attempts were always shut down by higher courts before taking effect.

On Wednesday night, the Supreme Court ruled 5-4 against blocking the law. In her dissenting opinion, Justice Sonia Sotomayor called the order “stunning,” referred to the law as “flagrantly unconstitutional,” and said the majority “have opted to bury their heads in the sand.”

Though the law can still be challenged in lower courts, and might very well come before the Supreme Court again, the fact remains: Most Texans cannot receive abortions in the state.

There is an anti-Republican legislation rally 6-8 p.m. tonight (Saturday) at Burnett Park, 501 West 7th St. Hosted by the Tarrant County Democratic Party, the rally protests “the recent onslaught of abhorrent Republican attacks on Texans,” including the abortion ban and permitless carry.