After almost two years of protests, marches, sit-ins, and red-faced rabblerousers from both parties spitting in each other’s faces, often separated only by a few feet and a policeman with his arms out in front of him, the Take Back Texas Rally Saturday in Burnett Park could easily be described as a rather pleasant break from the chaos, a return to normalcy, if you will.

It could also be described as, well, a bit boring.

The rally was put together by the Tarrant County Democratic Party to show that they stand “in opposition to the recent onslaught of abhorrent Republican attacks on Texans.” Despite the sweltering heat, nearly 200 people came out. Several women were dressed in the iconic red cloak and white bonnet of The Handmaid’s Tale. 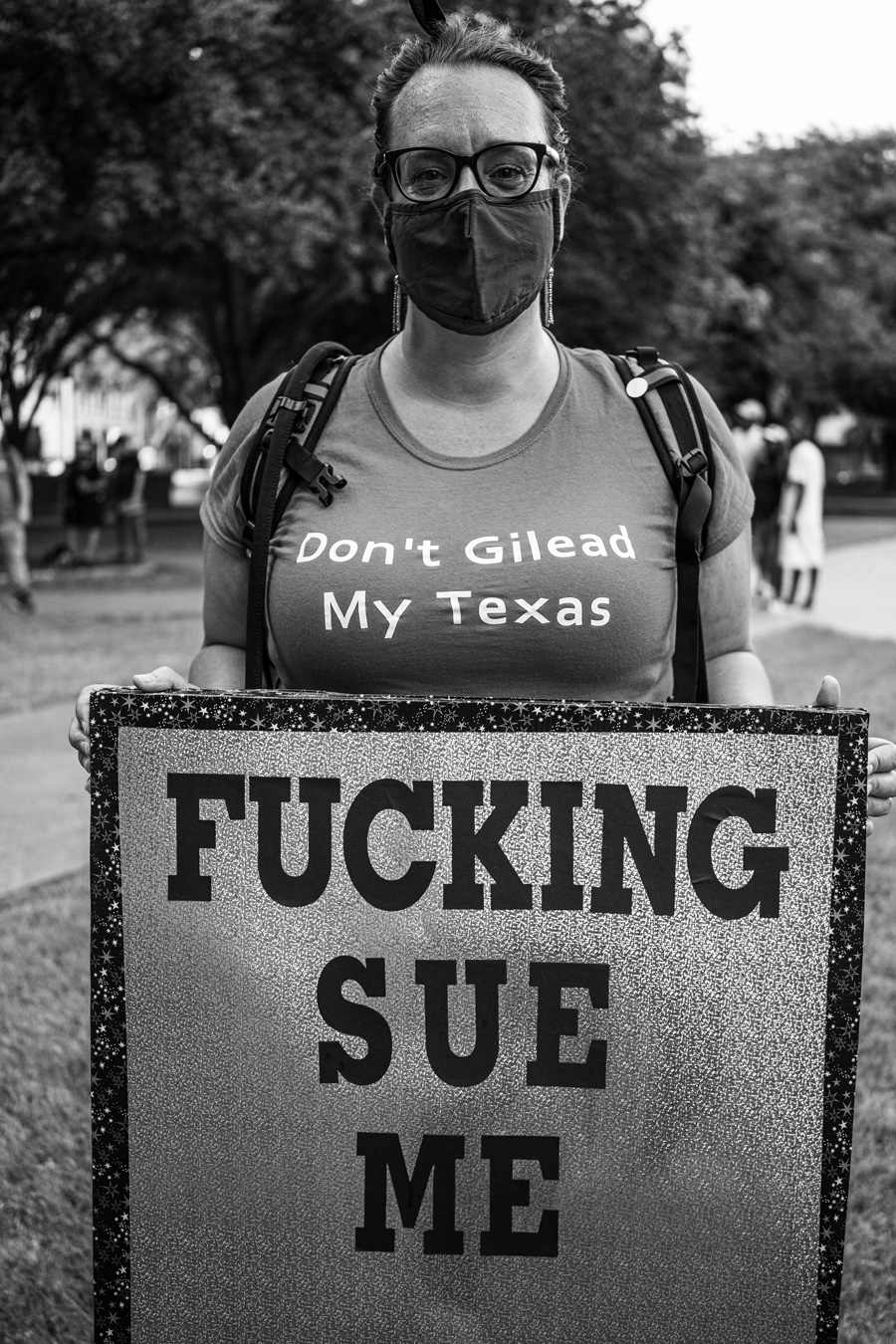 A group of speakers representing the Dems and Planned Parenthood and other local politicians took the stage, backed by fluttering Texas and American flags, to condemn the recent open-carry law as well as SB 8, which places a ban on any and all abortions after six weeks and allows to sue anyone who aided or participated in an abortion performed after the six-week mark.

The twin lightning rods of modern politics — the Second Amendment and abortion rights — had been touched, and one could be excused for expecting not only the speakers but the attendants as well to be visibly shaken from the shock, but both the speeches and the crowd’s response were mostly sedate.

City Councilmember Chris Nettles, whose District 8 stretches from West Meadowbrook to Willow Creek, delivered the most impassioned address, saying, “We will not be quiet. We will not sit down. We will not shut up. This will be the year for the Democrats,” a sentiment that roused some cheers and polite applause.

His speech was also noteworthy in that it was one of the only times that President Joe Biden’s name was mentioned.

And how, with the President’s approval rating beginning to slip, will the Democrats seize the day, let alone the year, as promised? The answer, which came later and in more than a few speeches, was simple, as it always is: money. In the most recent round of elections in Tarrant County, Republicans outspent Democrats three to one.

After the tumultuous Trump news cycle, in which accusation and hyperbole and hyperbolic accusations were flying fast and free from all sides, boilerplate rhetoric about how “We will not sit down” and statistics about campaign expenditures come off as bland, droning, and, somehow, old-fashioned. Not that long ago, political rallies were places where tears were shed, stories were shared to swells of strangers which were so personal they bordered on confession, and the average citizen could feel such passion for a cause that they would flood streets. The rhetoric may have been heavy on personal expression and light on policy prescriptions, but at least it was stirring.

The signs on Saturday, though, were perfection, as one would expect, given that those on the political left had more than four years to sharpen their poster prose against Trump, Fox News, and anti-maskers. As one speaker after another took the stage, it was the posters that got the attention. People, hunched over, with cell phones in hand, weaved their way through the crowd, snapping pictures of all the signage.

One person wore a shirt that read, “Don’t like abortions? Just ignore them. Just like you ignore children in foster care.”

One of the most common images was a coat hanger, stemming from the belief that there will be a return to back-alley abortions should SB 8 not be overturned.

While a TCU professor endeavored to explain why so many school boards have had such great difficulty articulating the need for Critical Race Theory (CRT) to quell the rancor of suburban parents, a queue about five people deep was forming around a woman with a glittery gold sign.

“CRT is the way that we can understand the system of racism that surrounds us,” Professor Max Krochmal was onstage telling the audience all while a woman was holding out her phone at the gold-sign woman, asking, “Can I please get a photo with you and your sign? I just love it.”

The two women posed together, the gold sign held up below their smiling faces.

And who wouldn’t love her sign? “Fucking sue me,” it proclaimed, three words to sum up how all in attendance at the Take Back Texas Rally felt.

As the rally ended, at least five people were packed around The Sign, smiling brightly, talking over one another, asking for another picture, and trying to sort out which phone belonged to whom.

Gus, a tall, well-muscled man with a cowboy hat resting naturally on his head and a Black Lives Matter shirt stretched across his chest, had been one of the five packed around the “Fucking sue me” sign. After his photo-op was over, he found his phone and waved thank you and goodbye to the group still posing next to the poster. When asked why he came all the way out to Burnett Park on a Saturday afternoon in near-triple-digit heat, his answer was as blunt as the glittery gold sign he had posed with.

“Abortion is not just to protect women,” Gus said. “It protects men from the pain of being a failed, shitty father. A man carries that his whole life.”

Since the short, hurried speeches had covered all the predictable talking points and the ink-on-cardboard slogans seemed to strike the right chord with the audience, the Tarrant County Democrats are left with a few difficult questions to answer. Will the return to normal and polite political rallies be able to stir sufficient passion to deliver Texas, a state that has not voted for the Democrat presidential candidate since Jimmy Carter in the 1970s, back into the hands of the Democrat party? And are political theories and policies important any longer, or are rallies just one more thing that exist to supply people with a pic to post?