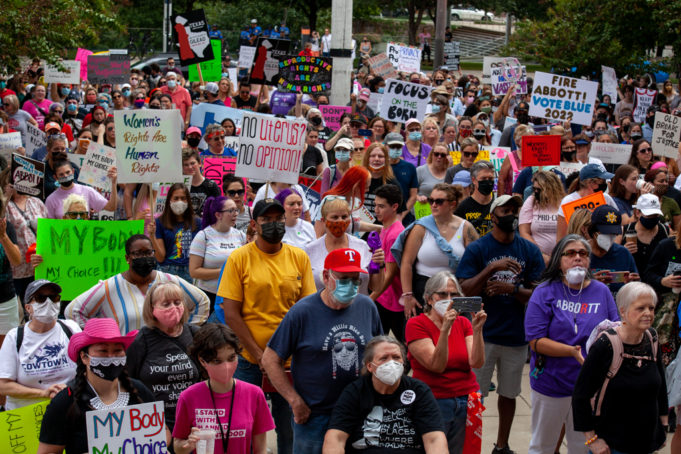 Chants of “My body, my choice!” and “Vote them out!” reverberated through the streets of downtown Fort Worth yesterday morning.

Women and men, high schoolers and retirees alike showed up in record numbers to the 2021 Fort Worth Women’s March.

This year the Women’s March took place against a dramatic backdrop, SB 8, the law that bans most abortions which went into effect in Texas on Sept. 1.

For Maria Koegl, of Watauga, the limitation of reproductive rights feels personal.

She had an abortion in 2019 after discovering her planned, wanted pregnancy was not viable. Even if the fetus had survived, a condition in which the brain and skull do not fully develop would have killed the child shortly after birth.

“My option is to carry my baby to term and wake up wondering if that’s the day the son I wanted dies or to go all the way through the whole nine months knowing inevitably what’s going to happen,” she said.

She said that if that had happened now, she would have been forced to continue with the pregnancy.

Koegl was one of several speakers who addressed the crowd from the steps of the courthouse. She said she openly shares her story to combat misinformation and decrease the stigma surrounding abortion.

Speakers raised their voices to make themselves heard over a small group of counterprotestors. A couple dozen people, mostly men, showed up to advocate against abortion. Though small in numbers, they made themselves heard through a loudspeaker held by one member of the group, Joe Anderson, of The Well Community Church in Argyle, who led the group.

“Not everyone is Christian!” she yelled at Anderson repeatedly.

“It’s more than anger,” she said about her reaction to the protestors. “It’s sadness. I’m only 15 years old, and I’m sick and tired of fighting for my rights.”

SB 8 has faced challenges. Most recently, the U.S. Department of Justice filed an emergency request to block the law. The case was heard two days ago and awaits decision from federal judge Robert Pitman.

SB 8 has effectively rolled back abortion in the state. Those at the event saw the march as an opportunity for a cathartic release and as a starting point for political change.

She said she hoped people would take the energy from the march and channel it into political action, starting with turning out to vote.

“Today is a call to action,” Campolo said. “This is the start of the next chapter of reproductive justice.”