The moniker “party band” and which groups it’s applied to often carries an undue negative connotation. Somehow, not being “serious” can translate into not being taken seriously. As if laughter, fun, and people dancing carefree are any less worthy human reactions to elicit from music than what the more “artistic” outfits typically get in the form of blank-faced dudes in skinny jeans standing arms-crossed, nodding along in time. It’s unfair to assume Bootsy Collins didn’t care as much about his music and what he was singing about as did Bob Dylan just because Bootsy chose to get people moving rather than writing mind-bending musical poetry a la “Mr. Tambourine Man.” It also bears noting that humor can be as meritorious as heartache for subject matter. All one must do is look at the average door receipts of a show with a band that focuses on fun versus another with your standard sad sack singer-songwriter.

One Fort Worth group that proves the previous point is the now near-legendary Rivercrest Yacht Club. The nerdcore-before-nerdcore rap trio recently dropped its third LP. Beezlebooty attempts to bring the energy of the Yacht Club’s notoriously raucous full-band live shows to standard digital listening formats for the first time.

“We started performing live in 2006/2007,” rapper/beatmaker Heffminster De La Roca explained. “A little bit later, we brought in Lee Zur Ly and The Rear Admiral and Mars Trillion [to play with us live]. They are just these god-tier musicians and added so much. They translated my crude beats and loops into some really magnificent songs and compositions, but we never had any record of that. For people who liked our live shows, the albums just weren’t indicative of that.”

Initially, the trio of De La Roca and fellow mic-masons Eric “Generic” Griffey and MC DJ DDS wanted to just release a recording of an actual live show, but they were never satisfied with the sound quality of the tracking. Then, when trying to recapture that live essence in the studio, it became apparent it wouldn’t be as simple as hitting “record” and laying down the songs as they would onstage.

“I just didn’t fully appreciate how much work went into post-production,” De La Roca said. To [keyboardist and producer] Mars’ credit, he spent hundreds of hours with each track getting the beats to line up and fixing all the little things.”

With work and family obligations, compounded by Griffey’s description of the group as being “absolutely and incredibly lazy,” a brief tracking session over one summer would drag post-production on for a couple of years before Beelzebooty would be finished. Though far from being captured with the spontaneous documentation typically required to recreate a live feel, the album does a fair job of providing the energetic boom and pop of the band’s performances as they trade verses about Star Trek, Steven Segal movies, and silly sexual innuendo.

“We didn’t perform the songs the way we would if we were tracking them for a regular album,” Griffey said of trying to retain a live spirit despite all the work involved. “We tried to make them a little more energetic than you might normally in the studio, especially for hip-hop. Particularly on the vocals. We used live microphones and weren’t concerned with getting every detail exactly right, and that made it much more like it would be live.”

Though many of the album’s 13 tracks date all the way back to the group’s inception 15 years ago, the title track is a brand new one. The accompanying album art of a crude literal butt demon was, as happenstance, one of the last drawings of the late renowned painter Ron Tomlinson, Griffey’s father-in-law. Though uncharacteristic of the work Tomlinson was known for, as a big fan of the silly, often nonsensical Yacht Club, the cover stands as a fitting tribute.

“He basically scrawled it on a napkin,” Griffey explained. “Though I doubt he would have considered it one of his works, it is his last one. When I played him the song, I’ve never heard anyone laugh so hard.”

Though it’s been a couple of years since RYC would sell out Lola’s Saloon on any given Saturday, the new album could mark the beginning of new collaborations or even a potential return to the stage for the famously rousing hip-hop band, though De La Roca and Generic are unsure about when and in what form that could take.

“There are things in the hopper,” De La Roca said. “There’s tracks and things in various stages of completion.”

Griffey is a bit less committal.

“I mean, never say never,” he said, “but I’m not sure that we’re ever going to be the band that releases a new album and plays a bunch of shows. But in some form or fashion, there will likely be some version of the Yacht Club in perpetuity.” 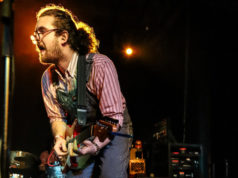