The holidays are the season when we take stock of our lives. Whether we look forward to family gatherings with dread or eager anticipation, the month that closes out the year is always full of new memories and reflections on past years. Now, four movers and shakers offer their personal stories of Christmases past. The recounted memories are a reminder of what makes December a month like none other.

The wintery weather conditions were bleak and growing more dangerous by the minute. Though it happened nearly two decades ago, Jenna Hill-Higgs remembers the night like it was yesterday. Just minutes before her drive home that Christmas Eve, Hill-Higgs had stopped by to visit her father.

“When you have parents at two different places, the holidays are always rough,” she said, referring to the years after her parents divorced.

Adding to the stressful night was the fact that Hill-Higgs had a contentious relationship with her dad. She recalled leaving her father’s Weatherford home feeling Grinch-like and muttering about how much she hated Christmas and forced family gatherings. By the time she headed home, a mix of snow and sleet was falling heavily, making an already dark and freezing night all the more treacherous.

Pulling onto I-20, her headlights were the only source of light on the barren stretch of icy road. As she accelerated onto the highway, a massive buck jumped in front of her compact car, hitting her vehicle and leaving it spinning out of control.

“Shit, I just killed a reindeer,” she thought.

The timing of the impact and her trash talking of Christmas weren’t lost on the twentysomething. The universe had sent a message.

“I was taking back everything I said about Christmas,” she recalled. “It felt like Blitzen was saying, ‘Take this!’ ”

There was no sign of the animal or a carcass. Shaken, she made her way home. She remembered giving copious hugs to her mother when she finally made it back to Fort Worth.

“I know it wasn’t a reindeer, but that was the first thing I thought of,” she said. It makes you appreciate things a little more when you were almost killed on Christmas Eve.”

Her relatives didn’t miss the opportunity to crack jokes about Hill-Higgs killing Christmas.

The image of a regal buck standing tall as snow fell remains frozen in her memory, like a beautiful snow globe but, well, more death-like.

In the years since, her Christmases have run the gamut of emotions. Raising two kids with her first husband who died several years ago came with years of happy Christmases and family traditions of cooking up pigs in blankets every Christmas morning.

“Before my husband died and when the kids were little, my moms came to spend the night so we would all wake up together,” she said, referring to her biological mother and her wife.

Now remarried to musician/venue owner Ryan Higgs, the mother of two said holidays are once again festive. Her youngest kid is almost 18. Rather than giving presents on Christmas morning, Hill-Higgs started a new family tradition — scavenger hunts. The idea is to make her kids work for their holiday cash. Hill-Higgs said she also enjoys seeing her grown children prod and poke fun at each other as they try to find their gifts. For the doting mother, those moments bring back fond memories.

She now spreads Christmas cheer through her Near Southside bar Liberty Lounge. All are welcome at the neighborhood watering hole that holds regular community events and proudly flies the rainbow flag. Liberty Lounge will be open until 2 a.m. on Christmas Eve and on Christmas Day. Whether you need a break from the fam or simply want to hear Hill-Higgs retell the story of her attempt to off Blitzen, you’ll find a warm and welcoming bar at 515 S. Jennings Ave.

Beth and Brian Hutson are using December to renew their wedding vows after 20 years. The owners of Elevated Content, a national branded content agency, owe their marriage to a chance holiday party.

In 1997, both Beth and Brian had recently gone through tough breakups. Beth’s older brother, possibly wanting to break his sister from her funk, prodded her to go to a holiday party at the home of the owners of a popular Italian restaurant where Brian worked at the time. Beth was sporting overalls and Doc Martens — not the kind of attire she was thrilled to go out in. Knowing that his little sis would enjoy the Sicilian fare once she went, he made her an offer she couldn’t refuse.

“If I have to pick you up and carry you, you’re going out,” her brother said. 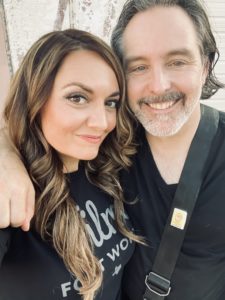 The day-long house party was bountiful, Beth recalled. Tables of vino, pasta, espresso, sambuca, and other Italian offerings nearly overflowed on tables. With each guest came more cases of wine.

“The food was amazing,” Brian recalled. “We stretched our legs and stepped outside. Somebody grabbed a football. I remember that Beth had the ball. I’m looking at this girl in blue overalls and Doc Martens and I say, ‘Throw me the ball.’ I was 20 yards away. She hit me in the chest. I was like, ‘Wow, this girl is awesome.’ ”

Beth couldn’t help but laugh at the memory. Throwing perfect spirals wasn’t exactly in her wheelhouse, but the chance perfect throw sparked something that continued throughout the day and into that night.

The two topped off the night with an outing downtown to The Pour House where Beth belted an applause-grabbing rendition of “Killing Me Softly” on the karaoke stage. Clapping the loudest near the front of the stage was a smitten Brian.

The group of friends crashed at a nearby apartment. When the group went out for Mexican food the next morning, Brian was too hungover to join them.

“I saved half of my fajitas and gave them to him along with my phone number,” Beth said of the moment that started a 20-year relationship.

Beth said that chance meeting has been a reminder to never pass up the opportunity to meet new people even if you aren’t feeling up to it. A few years later, the couple chose December for their wedding date. Their kids now use the holidays to play “Killing Me Softly” for their mom and dad.

Before marrying local singer-songwriter Celestial L’amour, Luis Lopez was part of a professional touring band that booked a Christmas Day show near Fort Worth a few years ago. The gig was expected to pull hundreds of attendees, Lopez recalled.

“We were running a bit late since we tried to spend time with our families on Christmas Day, and the weather wasn’t cooperating very much,” Lopez recalled.

When the 11 bandmates arrived at the venue, the parking lot was completely empty. Lopez’s dad, who managed the band, went inside to see what was up. The gig had been canceled, and the venue owner had failed to notify the musicians.

“We were all pretty bummed considering we couldn’t drive back home due to the weather,” Lopez said. “We booked a hotel and spent Christmas Day with our 11-member band and made the best of it. We actually had a really good time considering the turn of events.”

After the bandmates moped for a bit, the mood changed as Lopez and company started sharing random personal stories.

“It was special because throughout all of the years we had spent touring with each other we had never shared so much and gotten to know each other like that night,” he recalled. “It’s one of my fondest touring memories.”