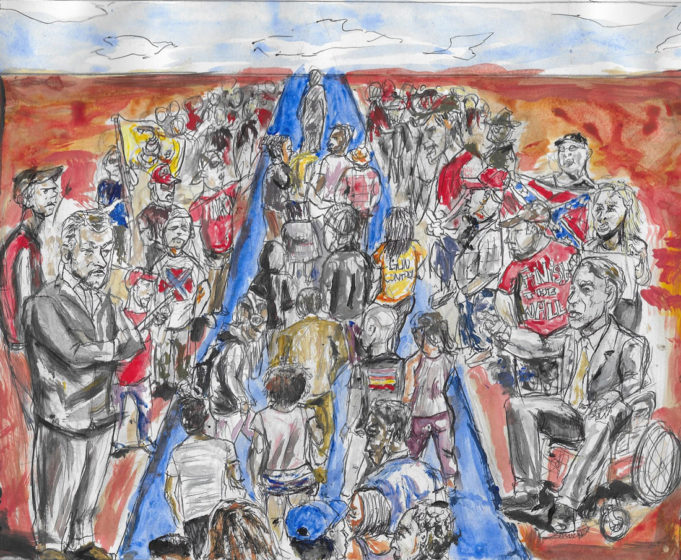 I received a message a couple of days ago from a local critic, and it made me smile.

it’s a shame no one has not run over you with a truck yet. for being a Texan you sure have a pernicious attitude towards the state. I’ll say what everybody else is thinking MOVE

This catchy “Love it or leave it” redux was originally in vogue around the time I was born, and this iteration no doubt emanates from a white man nostalgic for the days when “colored” people, women, and young folks knew their place and when unfortunate young men, in particular — with very little wherewithal or wisdom — “did their duty” without question. And if they didn’t do “their duty,” and they and their sisters, brothers, and mothers took to the streets and protested, mouth-breathing goons cracked their skulls or gunned them down in the streets. Ergo, what’s new is old, and what’s old is new. Again. And chatty contrarians continue to rumple Rip Van Winkles.

I’m sorry, neighbor, but even with conservative cable news and talk radio girding you for menacing prattle, the good ol’ days are never coming back again (because they weren’t that good), and the good ol’ boys — i.e., the abhorrent golem-esque kakistocracy that you surely helped elect to dominate the Texas state legislature — is eventually going the way of the Dodo.

In the meanwhile, annoying folks like me will remain in Texas and jaywalk every time we get the chance — especially across the asinine byways that you and your ilk created to define and confine the rest of us.

All this, of course, is to say I won’t be leaving Texas or you or “it” alone.

As long as narrow-minded, self-important white men still try to 1.) disenfranchise persons of color, 2.) treat women as their inferiors, 3.) knowingly and willfully squander our natural resources and poison our land- and seascapes for profit, and 4.) treat the rest of nature in this state as if it were expendable, sentient Texans will continue to stand up and speak out.

So, if, perchance, you get to feeling like you want to fire up that gas-guzzling King Ranch edition (yes, we know … the one with the dubiously defiant “Come and Take It” decal on the back window) after placing a pinch of Fox News between the ol’ hypothalamus cheek and cerebellum gum, and drive around looking for rational folks to mow down, we won’t be hard to find. We will continue to challenge the powers that be (and the pawns they manipulate), because if they or you were ever on the side of truly equal opportunities for life, liberty, and the pursuit of happiness or justice for all, you certainly aren’t now.

In the last two election cycles, you knowingly and willfully aligned yourself with a voting bloc that included neo-Nazis, Proud Boys, fascists, white supremacists, chauvinists, science deniers, Russian sympathizers, and treasonous insurrectionists, but instead of being ashamed or feeling aghast, it’s an alignment you’re surprisingly comfortable with.

Your conservative inclinations and associations are obviously your right and, even more so, your privilege, but being comfortable with the state’s diversity, trusting women with their own reproductive decisions, and generally advocating for the rights and privileges of folks who don’t look like you and me, who don’t love like you and me, and who aren’t represented in our government as fairly and beneficially as you and me is my right. And it’s my privilege. And it should be our privilege. And our mission.

It may not be tomorrow, next month, or later this year. But it’s coming.

Fort Worth native E.R. Bills is the author of Fear and Loathing in the Lone Star State (2021), Texas Oblivion: Mysterious Disappearances, Escapes and Cover-Ups (2021), and The 1910 Slocum Massacre: An Act of Genocide in East Texas (2014).

This column reflects the opinions of the author and not the Fort Worth Weekly. To submit a column, please email Editor Anthony Mariani at Anthony@FWWeekly.com. Columns will be gently edited for factuality and clarity.