I don’t follow college sports much, but my love of basketball has sucked me into March Madness in the past. Thus, when I found out that eight teams were going to play first- and second-round games of the NCAA tournament at Dickies Arena, within walking distance of my home, I felt like I should be there. I should have walked, too, because then I would have avoided the $25 parking fee. Still, attending this event in person that I’ve watched so many times on TV was a memorable experience. I can still smell the funnel cake.

Fort Worth had hosted the tourney before, but that was at Daniel-Meyer Coliseum more than 50 years ago. Since then, the NCAA preferred staging its tournament games in Dallas or even Denton. The new venue undoubtedly was the draw for this year’s games, and it looks nice, as new venues tend to do. The atmosphere at March Madness is party-like compared with the businesslike vibe of a regular-season NBA game or the intensity of an NBA playoff game. It’s something to be surrounded by fans from distant places cheering on teams that you’ve never seen. I made a point of not doing any scouting on the teams involved, wanting to get a sense of them by watching them at work. These early rounds of the Big Dance are like the Champions League or the World Cup, where powerhouses full of stars have to face outfits full of players known only to their local fanbases.

St. Patrick’s Day started with two teams that wear green: The defending NCAA champions, Baylor, took on 16th-seeded Norfolk State. The Bears pressed madly, sometimes at the 3-point line, other times as soon as the Spartans inbounded the ball, forcing State’s ballhandlers to make quick decisions. That seems to be the way to beat the minnows, as Baylor prevailed 85-49. You don’t learn much from a blowout win in basketball — when football or soccer teams crush their opponents, you gain a much better sense of how they prefer to play.

After that game, I watched the colors in the stands turn from green to blue for both Marquette and North Carolina. A matchup of 8- and 9-seeds promised a more competitive game, but this was another skunking, as the Tar Heels bombed the Golden Eagles into submission from 3-point distance behind Caleb Love and the extremely beardy Brady Manek.

Carolina looked to be a tough opponent for Baylor, and the Heels seemed like they would shoot the Bears out of the gym when they met the following Saturday. The game almost turned with 10 minutes to go and UNC up by 25, when Manek was ejected for elbowing Baylor’s Jeremy Sochan in the face. The Bears switched on their full-court press and were so successful at creating cheap points off turnovers that I wondered why they hadn’t tried that before. The green-and-gold faithful (considerably outnumbered by Tar Heel fans) managed a deafening chant of “B-U, B-U!” when the Bears took the deficit down to seven. The top seed managed to force overtime, but when Carolina scored the first six points of the extra frame, Baylor had nothing left.

The Midwest region games began with San Diego State jumping out to a big first-half lead against Creighton, but the Bluejays stubbornly refused to go away. It felt like a dagger when Trey Pulliam hit a three to put the Aztecs up by nine with 3:30 left to play. The Bluejays held them scoreless for the rest of regulation and scored nine to force overtime. They edged ahead in the extra period, a great display of guts from a team that missed point guard Trey Alexander for long stretches due to foul trouble and saw main big man Ryan Kalkbrenner go down with what appeared to be a serious knee injury. Meanwhile, the Aztecs surely went home wondering how they lost this.

The remaining first-round game was a matchup of the best bands I heard all day, with both the KU Basketball Band and Texas Southern Ocean of Soul bringing lots of power and polish. The fanbases were also evenly matched, as the famously rabid Jayhawk fans were given a run by the Tigers’, who made the trip up I-35 from Houston. Too bad the game itself wasn’t as competitive, as Southern (an HBCU, like Norfolk State) were swallowed up by Kansas’ big men every time they ventured into the paint. When the Jayhawks’ 6-foot-10 David McCormack ran over the Tigers’ 5-foot-10 P.J. Henry for a loose ball, I felt like shouting, “Pick on someone your own size!”

The second-round match of Jays vs. Jayhawks featured another display of fortitude from Creighton, this time in a losing cause. Minus Kalkbrenner, the Bluejays fired away from 3-point range and hit many more of those shots than their track record would indicate. Arthur Kaluma (whose family is Ugandan) led the way with 24 points, but the top seed was saved by a career game from Remy Martin, scoring 20 points off the bench. He was so obscure that CBS ran the wrong picture of him in their telecast. When his basketball career is done, he should advertise the Cognac company. 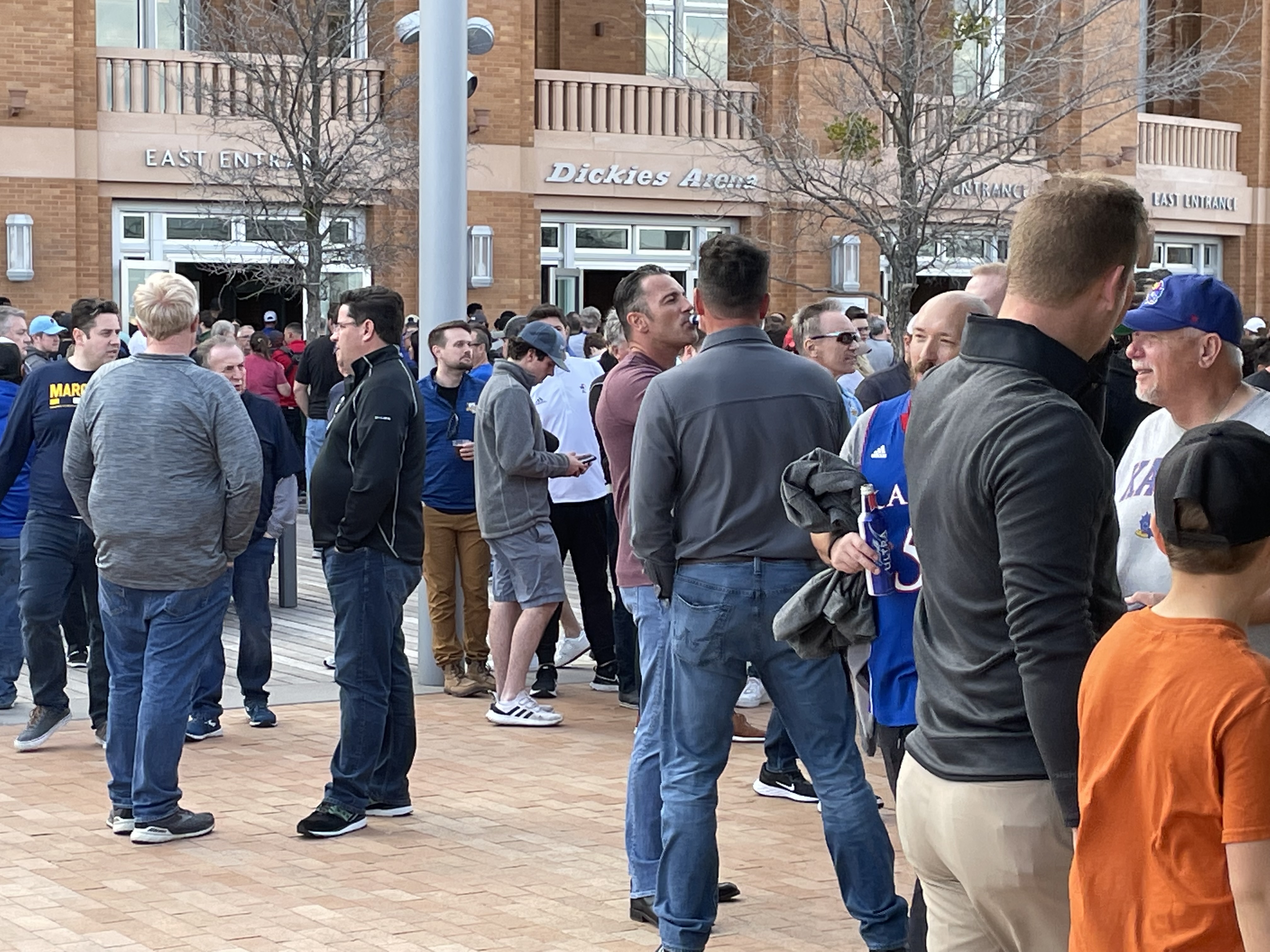 During breaks in play, the JumboTron showed footage of games ongoing in other cities, and the crowd cheered lustily when Iowa, Connecticut, and Kentucky went down in defeat. Here’s the difference between NCAA basketball and European soccer: When the giants are upset in the Champions League, there’s always anger from neutral fans and the press because they want to see big names face each other. Here, we like the unpredictability of the big teams going down and the smaller teams having a chance. In the national spotlight, Dickies Arena proved a splendid host for these fans from all over the country. If the Final Four ever comes to Fort Worth, it will be a fine venue.

Monkey Off Their Dak