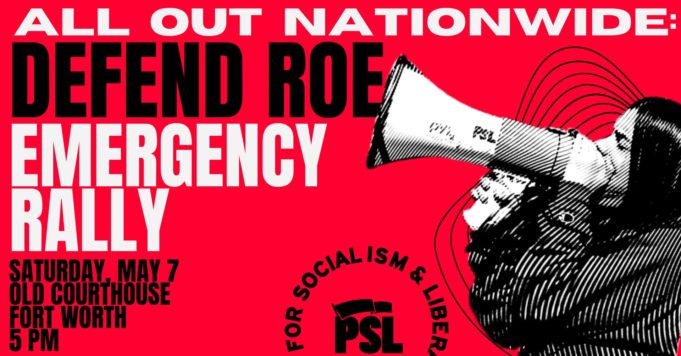 The past week has seen a nationwide outbreak of protests in response to the leaked U.S. Supreme Court vote to repeal Roe v. Wade, the case guaranteeing the constitutional right to abortion. The majority opinion, by Justice Samuel Alito, is a draft. The official ruling will most likely be published within the next two months.

At 5pm tomorrow (Saturday), the Party for Socialism and Liberation DFW (PSL DFW) will hold a rally at the Tarrant County Courthouse (100 W Weatherford St) in downtown Fort Worth.

The rally will feature speeches from community leaders. As of Thursday afternoon, the lineup was not solidified.

Organizers expect the rally to last around two hours, though people are free to come and go as they please.

“Right now, more than ever, people need to stand up against this,” said Eric Ayala, PSL DFW member at large. “A lot of people are feeling this righteous anger, and it needs to have an outlet. We can’t just let this passively slide. There has to be resistance.”

He described the rally as a “first step” in response to the leaked SCOTUS decision.

Attendees should plan for hot weather and bring signs if possible.

“It’s a devastating situation, and right now is a moment we can use all that energy in order to create something positive and more everlasting,” Ayala said.