The moment my thirtysomething friend and I stepped out onto Foch Street in the West 7th corridor, we felt out of place.

“There are children everywhere.”

I nodded in agreement with her remark, eyeing with concern a young inebriated couple who nearly took a tumble as they crossed the busy intersection.

If only a lounge like Dirty Laundry had existed in college when I rolled up on the local bar district! I would have soaked up all the laundry puns, washed down every cocktail on the menu, and pressed all my friends to join me. Then I’d rinse and repeat every week. No “if”s, “and”s, or “suds” about it.

Before you pack up your overflowing hamper, you should know that Dirty Laundry isn’t a functioning Laundromat. Simply for looks, the storefront contains a single row of faux retro-looking front-loader washers and dryers, each featuring a digital display of clothes tumbling or sloshing against the glass. The attention to detail is noteworthy, like the soundtrack of typical washer/dryer noises, rack of hanging clothes, and black-and-white tile floors.

The only machine without a display touts an “Out of Order” sign and serves as the secret entrance to Dirty Laundry. There’s no keypad code like at Bodega West 7th, no literary-themed password to grant you access through the bookshelf to Thompson’s underground Rx. There wasn’t even a token to slip through the machine’s quarter slots. All it took was a tug of the handle to open the door. I couldn’t help but think that a little more presentation around gaining access would have gone a long way.

What greets you within is a wall covered floor to ceiling with an absolute mess of garb. Around the corner, the dark interior of the bar accented with neon blue and pink lights exudes a clubby vibe. Various articles of clothing are strewn about, with everything from lingerie to towels and tube socks draped over light fixtures and wall art, as if someone had blindly tossed them in the general direction of a laundry basket. Joke’s on them, because the basket is suspended from the rafters.

My guest and I settled into a small alcove with velvet bench seating. An electric violet hue washed over us as we people-watched and quaffed our first round.

The crowd surprisingly skewed older, but, as midnight approached, the younger hordes converged with tits and cheeks on display. With temperatures reaching that of the devil’s backyard, I can’t blame them for showin’ some skin.

To its credit, Dirty Laundry leans into the theme with its decor and “Laundry List” of punny mixers. The creation of my Fluff ’N Fold, an Old Fashioned with TX Whiskey and the added flair of maple cotton candy, was a spectacle in and of itself. The bartender placed a tuft of the carnival candy atop the ice cube in my tumbler and poured the liquid over the spun sugar, dissolving it into the concoction. After such a fun display, the drink itself was a little disappointing.

The Pressed & Creased I ordered for my friend was made with Absolut, Sprite, and soda, and I added a watermelon flavor boost from the list of fruity options. That may have been what ruined the drink for her, because my compatriot found it overly sweet with a weird aftertaste.

My next beverage didn’t improve much upon the first, but this time, it was my own damn fault. I chose the Mezcal-forward Last Load without making the connection to the play on a Last Word, a Prohibition cocktail with chartreuse, whose herbal, earthy essence hit me hard and didn’t initially seem to blend well with the smokiness of the Mezcal and the oddly sweet bite at the end. As I sipped, the discordant variety of flavors gradually grew on me.

Like Goldilocks, I was determined to find the Dirty Laundry cocktail that was “just right.” Betraying my alma mater, I finished the night’s escapade with the Horned-Frog Wash — mostly because the concoction contains edible glitter. The bartender asked me questions to glean whether I would like this washdown. Did I like gin? Had I ever had an Aviation? She warned me that “some people think it tastes like soap” because of the floralness of the gin and added lavender. None of that put me off, until she added that people usually request it solely because of the “highly edited photo on the website.” My heart sank a little. I’d been catfished by a tall glass “of water” online that didn’t match their picture.

I wish the inquisitive barkeep had been wrong. In the neon glow, my Last Load appeared a bit like dirty washing machine water with a hint of a glint. The bar had also run out of maraschino liqueur, so I was playing with second-string liquor. Despite all that, the cocktail was strong, definitely floral, and fairly refreshing — not “just right” but close enough.

I can’t say it surprised me when I discovered that Dirty Laundry and Bodega West 7th are partners. Both attempt to modernize the traditional speakeasy with “hidden bar” concepts that don’t exactly embody the spirit of a speakeasy. Maybe I’m too much of a purist, but to warrant the name, shouldn’t your front business be a fully operating one?

The most shocking part of the whole experience was my tab. Prices weren’t posted anywhere, and, on top of that, I tipped over the built-in 20% gratuity I hadn’t noticed. All in all, I spent more than a hundo … on five drinks. I couldn’t shake the feeling that I’d been hung out to dry.

Overall, Dirty Laundry felt like a brilliant concept that hadn’t been completely ironed out. The interior design elements were on-brand, though strangely mixed with taxidermy and Western elements. Even the music didn’t seem to match the vibe. Classic rock songs straight from the Guardians of the Galaxy soundtrack played on repeat when Top 40 or club music would have been more fitting.

With so many institutions of, a’hem, “dryer” learning in Fort Worth, there must be plenty of college students who’d take advantage of a Laundromat and lounge. Getting my laundry done there might have made my bill feel a little more worth it.

While the place wasn’t my scene, that shouldn’t “detergents” or ladies from taking a load off at Dirty Laundry after a draining day. After all, the cocktails were creative, the decor one-of-a-kind, and the atmosphere intriguing. Why not take it for a spin cycle and decide for yourself? 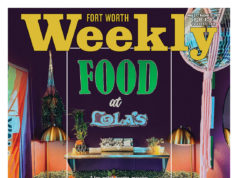 Suckin’ on a Chili Dog