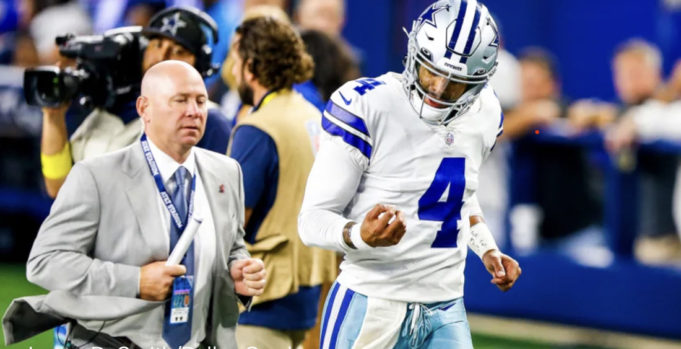 The NFL offseason is long. Even with the league’s year-round grip on sports media attention — in which now even the draft is a primetime network TV affair — actual games are jammed into little over a four-month span. Nearly the entire insufferable 182-game MLB regular season (including spring training) takes place between the clock reading zero at the previous Super Bowl and the opening kick of Week 1. After all the time spent over the last eight months microdosing Dallas Cowboys content — through free agency and the draft, from OTAs and training camp, to enduring the unwatchable preseason games — once we get actual, meaningful football, the tension and excitement have built to the point of nuclear reactor-meltdown level.

Such a long buildup makes the pain of all that joyous anticipation evaporating almost instantaneously hurt all the more. And vanish instantaneously for Cowboys fans, it did. Not only did Dallas open the season on Sunday with a 19-3 loss to TB12 and the Tampa Bay Buccaneers, but quarterback Dak Prescott has likely thrown his last pass until after Election Day. Under siege by Tampa’s stout defensive front and working behind a patchwork O-line all night long, Prescott broke his throwing hand after smashing it into the forearm of a rushing Shaq Barrett on the follow-through of a pass in the fourth quarter. The injury required surgery, and No. 4 will reportedly be sidelined for six to eight weeks.

In the loss, Dallas wasted a gutsy defensive effort — holding one of the league’s top scoring offenses from a year ago to under 20 — by countering it with an embarrassingly inefficient offense that managed just a lone field goal on their first drive, then bupkis for the rest of the night. Don’t get me wrong. The Dak injury is a blow that the Cowboys’ season is unlikely to recover from, but in the context of this one game, it was far down on the list of reasons they lost. The offense, with or without Dak, is in absolute shambles. In the three and a half quarters Prescott did play, he was absolutely dreadful. His stat line reads a cringeworthy 14 of 29 for 134 yards and a pick. He was constantly over-throwing or throwing behind receivers. The one pick could have easily been three or four if the Bucs’ defenders had better hands. The performance was one of the worst of his career. Somehow Cooper Rush was worse in relief.

The offensive line, already dangerously thin with the departure of La’el Collins and the (predictable) loss of Tyron Smith to injury just before the season began, lost new starting left guard Connor McGovern on the first drive of the game. In the process, his backup, second-year lineman Matt Farniok seeing his first NFL action, allowed two sacks, nine pressures, and four QB hits on the night. The injury to Dak came up the middle right past Farniok.

If only there were something that could have been done to avoid all this offensive ineptitude.

Alas, the financially destitute Jones family had to make some tough business decisions in the offseason, which you could say led directly to this inevitable and tragic outcome. Sadly, they had no choice but to cripple 2021’s top offense by flipping their No. 1 wide receiver (Amari Cooper) for a ball bag and a roll of athletic tape and to put a former All-Pro right tackle (Collins) on the street because … reasons. Jerry and son Stephen absolutely had their hands tied by a challenging salary cap situation, you understand. They needed Cooper’s money to keep Michael Gallup, a fairly unproven and injury-prone wideout who might actually be able to play at some point in October. They needed Collins’ money to, well, sit in a pile with the rest of the unused $29M the team had left in cap space. It simply couldn’t be helped. You wouldn’t understand, not having the football genius that — along with a stilted, inexplicably redneck vocal cadence — only all Joneses possess.

So, that’s it. Three and a half quarters of frustrating football, and that’s your 2022 season, folks. It would be completely heartbreaking if it weren’t also so incredibly predictable. Literally anyone with a passing understanding could see the potential dangers the Joneses were lining up with their roster moves. The most frustrating thing is that the damage was wholly self-inflicted. The personnel decisions were conscious and unprovoked by any external forces. The front office owns the outcomes.

Dak is a good quarterback, not a great one, but a good one. He needs help. Without decent targets to throw to, he gets panicky and inaccurate, especially when he has limited time to throw because defenders are constantly in his face due to bad offensive line play. This offense was set up for failure from the jump, not to mention bad O-lines get quarterbacks hurt.

The Jones family hubris has struck again. When asked in an interview recently why they didn’t do more to bolster the offense in the offseason, Jerry Jones himself said, “I have to believe one and one makes three,” meaning his eternal optimism will carry the day. Well, he may believe it, but as Mr. Incredible said in Incredibles 2, “Math is math,” and no amount of assurance that you’re the smartest guy in the room will change the numbers. Jerruh also famously said, “Did you enjoy those three Super Bowls? I hope you did. I hope you did very much.” And I hope you did, too, because they’re the last you’ll ever see in this town as long as the Joneses are running the show. And they always will. l