In the last couple of years after #MeToo, an evolution of feminism spearheaded by dynamic Black women like Beyonce, Lizzo, and Issa Rae (to scratch the surface) has taken over in popular culture, a movement lovingly coined “That Bitch” feminism. (If not by me, then who?) It probably has something to do with the fact that #MeToo was started by a young Black woman, Tarana Burke, in 2006 but didn’t seem to really matter until 2017 — when it was popularized by white celebrities Ashley Judd and Alyssa Milano. Add all the previously silenced voices tearing through the veil of the willfully ignorant aughts, and the zeitgeist has much to make up for.

Indeed, the end of the ’90s and the start of the new millennium was bleak in mainstream culture. Most subversive artists, inspired by the digital takeover, used the internet to start their own labels or even cut out the middlemen entirely with the invention of livestreaming. A new genre called indie music drove serious artists further underground to the detriment of the mainstream culture at large. A new air of misogyny fueled by cultural phenoms like Eminem and Dave Chapelle raged on as we enjoyed songs about the abuse and murder of women and laughed at date-rape jokes in sketches like “The Hook-Up Hall of Fame.” In the medium of film, predatory creeps like Harvey Weinstein, Kevin Spacey, and Woody Allen were lauded by audiences until rising tensions finally exploded with the arrival of #MeToo in 2017.

Truly, though, nobody really cared until Judd and Milano spoke out about it, but even though it was appropriated by whites, Black girls are taking it back and making the newest wave of feminism all their own. And the results are quite a fucking thing to behold.

Specifically, I’m talking about Rapshit! Issa Rae’s new show is about the constrictive dichotomy faced by female musicians, especially women of color, in their struggle to be taken seriously as artists while remaining sexually liberated under the exploitation of the male gaze.

Shawna and Mia support each other in their daily struggles to be recognized as important rappers in a field dominated by men that’s often rife with toxic masculinity. Mia, as an impoverished single mother left by her manipulative boyfriend, especially symbolizes the real struggle of modern women. Unlike most shows about struggling young people, the girls’ parents are not present. The young women are on their own entirely — except in the most moving scenes when Mia is degraded by her mother’s sly putdowns about her artistic ambitions.

The way her mother exudes negativity around Mia’s daughter is something Mia refuses to accept as part of a new generation of women trying to break the Boomer generation’s callous treatment of children. As Mia, the phenomenal KaMillion is mesmerizing, dominating every scene she’s in. Her rendering of this experience is especially unforgettable.

At times, this poignant story feels like a memoir, even — or especially — as it sometimes unfolds via the main characters’ phone screens. Rae explicitly gives voice to the way people of color have deconstructed the mass media’s narrative by way of technology, giving birth to a raw agency never possible before the invention of cell phones and social media. She highlights an unfiltered narrative that has given marginalized people the platform they needed all along to own their voices in real time without the dissolution of a third party’s influence. Like say for instance: the police.

This show portrays the struggle of impoverished females with real problems like making rent and being a good single mother under the constant pressures of homelessness, mental illness, self-sacrifice, and failure. Shawna is fixated on being taken seriously as an intellectual feminist given that she dropped out of college to pursue her career based on promises from a male scene-maker who dropped her from a label for not being sexual enough. To pay rent, Shawna is now involved in white-collar crimes. She also covers her face while rapping abrasively, using the same brazen brutal truths as the riot grrrls of the ’90s but with far better lyricism, to broadcast her message of equality and justice for women. This does not go over well in a genre interested in making fun music for hard lives as opposed to hard music for fun lives, like white people have always loved in their unencumbered privilege.

Mia tries to explain the new feminist concept of sex as a weapon owned by and operated on a woman’s terms to flip the script of exploitation. In this way, Shawna and Mia learn from each other and come together beautifully in a body of work that showcases Shawna as the brain, Mia as the heart, and both ladies as the soul.

Rapshit! is the show that all marginalized females have needed and been waiting for. Of course, HBO is probably just using the Black experience to pull itself out of the billion-dollar debt it has fallen into by way of so many mistakes, like greenlighting Girls by pseudo-feminist Lena Dunham. In fact, a prime example of the rise of “That Bitch” feminism from a dormant fem culture can perhaps be seen most clearly in the downfall of Dunham juxtaposed against the rise of Rae, whose first project was the groundbreaking and critically acclaimed Insecure.

This barometer comes through quite clear in that both ladies were given their own shows on the same network, where they portrayed their own respective experiences as awkward and unapologetic underdogs growing up in the new millennium, trying to succeed as leaders in a patriarchy: Rae in California and Dunham in New York. But as Rae made it known even back then, this is where the similarities ended. Rae even had enough foresight to balk at such comparisons in interviews.

Dunham was signed by HBO in 2012 but Rae not until 2017, so this belies a strong connection between her hiring and the rippling of the movement. HBO most likely sought out Rae only in a panic to seem progressive to marginalized fem voices finally surfacing through digital platforms. Also, it was in answer to the controversy surrounding Dunham’s protest to a #MeToo survivor’s testimony against a sexual predator who worked on her show. She later apologized for this in 2018, but by then, everyone could see her as more harmful than helpful to the movement.

Both shows are loosely autobiographical. However, being self-made on YouTube, with a built-in audience, Rae personally embodies a new demographic grossly underrepresented in mainstream culture: the successful and liberated Black girl. This was accomplished largely through the power of social media. Rae, however, didn’t receive accolades nearly as fast as Dunham, who “earned” her big shot through the classic nepotism that comes with being raised in Manhattan by artist parents who knew Judd Apatow and gave Dunham his email address for her screenplay.

The new show Industry that Dunham produced is not great. It’s about as sterile and boring as her entire ethos has become. Conversely, on Rapshit!, Rae — in all of her self-made grit and depth of character — has given life to vivid, relatable, and important characters who marginalized feminists can finally relate to. In other words, Rapshit! is a neon paragon of “That Bitch” feminism. 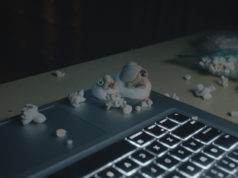