Home Eats Eats Bull’s Eye
SHARE
Facebook
Twitter
The guy behind the cash register at Il Toro Café — the same guy who tells you the specials, takes your order, fetches the drinks and food, makes sure the bread basket is always full, and hovers quietly throughout the dining room — wears a Texaco shirt. No big deal. Don’t need some fancy guy in a suit and tie ringing up your check after you chow down on some pretty good Italian lunch fare. 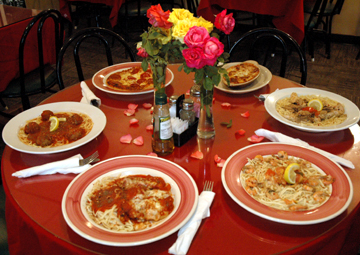 But when you go out into the parking lot of the restaurant and see the Texaco gas station just a few yards away, you start wondering. Maybe the hard-working café host used to work the cash register at the Texaco, pumping out $3 a gallon gas and lottery tickets and 12-packs of cheap beer. Or maybe the gas station owner, figuring that this eatery, like its predecessors, wouldn’t last long, gave his neighbor some shirts out of pity.

One thing you never expect is the truth: that the little guy running around the restaurant next to the gas station owns both. Habib Surani, who has owned the Texaco Station at North Henderson Street and White Settlement Road downtown for nine years, decided to jump into the food business a few months ago. He had built the restaurant space next to the station, but after several restaurant tenants had come and gone, he decided to take a stab at it himself. Surani always had an interest in cooking and running a restaurant, and while the Trinity River Vision project will make his property valuable some day, he needed some income off the property in the meantime.

So Il Toro (the gas station is “Bull’s,” so the name was the easy part) is the latest in Italian food at this busy corner just northwest of downtown, offering cheap specials, huge portions, and quick service in a non-pretentious, blue-collar atmosphere. For the most part, Surani succeeds quite well.

The downtown lunch crowd is the bread and butter of his business, and Il Toro is giving worker bees what they’ve been missing nearby — affordable, generous portions of Italian specialties. Il Toro offers two or three specials every day at $5.99, which includes a huge salad and unique homemade bread. Most Italian joints lay out some rolls slathered with melted butter. Il Toro serves a crusty round loaf with herb-flavored olive oil. The bread alone would be worth the $5.99.

The chicken piccata was close to perfect. Most Italian restaurants sauté the chicken breasts, drizzle some lemon butter sauce over the top, and fill the plate with some boring spaghetti and tomato sauce. Il Toro serves the chicken over linguini and mixes the sauce throughout the pasta bed, with fresh mushrooms and wedges of tomatoes jumping out in every fork full. The dish was not so much a plate but a platter, and it seems everyone in Il Toro for lunch on the day of a recent visit was taking large portions home.

The eggplant parmigiana was solid but not spectacular. The purple veg was baked in a bit too much cheese and sauce, and not breaded. But the flavors mixed well, and once again, the portion was enormous. The homemade cheese ravioli were satisfying and (thankfully) not overwhelmed by the tomato sauce.

Il Toro also has other stuff you’d expect to find at a good Italian café. The hot and cold subs are big, and the bread is fresh. For the record, Il Toro’s meatball sub may be the best in town. The restaurant also puts out deep-dish and flat-crust pizzas. Crispy on the bottom and chewy through the middle, Il Toro’s flat-crust pie doesn’t meet that standard but surpasses most of what’s available here in town.

And, yes, the lunch specials apply to the pizza. For $3.99, you can get a one-topping, four-slice personal pizza served with a gargantuan salad and that olive oil-drizzled bread. The service is quick and friendly — you’d probably spend more time and money for less at the nearest fast-food joint.

Surani doesn’t have an easy time ahead of him. Even though his restaurant is close to downtown, right across from the RadioShack headquarters, it’s still not within walking distance from anywhere. Also, Surani’s previous tenants couldn’t make a dent in the market with Italian fare, so we’re not sure why he thinks he will.

But Surani says he’s not going anywhere. He wants to hold onto the property until the Trinity River Vision dollars come a-knocking, and he figures he can make some money — and feed his foodie habit — by running the restaurant himself in the interim.