Home Film Film Reviews Outback Slaughterhouse
SHARE
Facebook
Twitter
During an interlude late in The Proposition, a member of an outlaw gang (Samuel Budge) sings a song to his fellow gang members about lost love in a thin, soulful tenor voice. The other outlaws are all moved by the song’s beautiful rendition of heartbreak. Then, near the end of the film, the same man sings the same song while trying to rape a woman. Rather too easily this encapsulates the contradictions in this latest Western film from Australia. 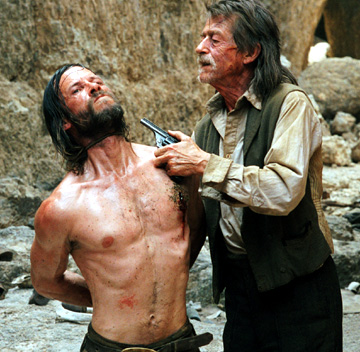 After a serene opening credit sequence establishing the setting as Australia in the 1880s, the film plunges us into the middle of a shootout, which ends with outlaw Charlie Burns (Guy Pearce) and his younger brother Mikey (Richard Wilson) captured by the forces of Capt. Stanley (Ray Winstone), a British officer who’s determined to “civilize” the land. With Mikey wounded, the captain offers Charlie a deal. The eldest Burns brother Arthur (Danny Huston) is still on the loose, having recently massacred an entire family of Christian missionaries. Arthur now lives with his gang in the caves on the edge of civilization, where neither the captain’s men nor the aborigines dare to tread. If Charlie can hunt down and kill Arthur by Christmas, nine days hence, Mikey’s life will be spared.

The movie is being hyped for two reasons: its extreme violence (which is definitely strong but not shocking if you’ve seen many Peckinpah Westerns or recent Asian horror flicks) and its script by Nick Cave, a highly acclaimed singer-songwriter originally from Down Under whose lyrics frequently tend toward gloom and violent death. This is actually Cave’s second screenwriting effort, his first being a modern-day prison drama called Ghosts … of the Civil Dead, which came out in 1988. He worked with director John Hillcoat on that film, and here the two re-team. Hillcoat’s visual approach is no less effective for being obvious, juxtaposing the splendid natural beauties of the outback with the bloody violence done by these men with rotting teeth and grimy hair.

Pearce is a bit of a bore when he’s called on to play tough-guy antiheroes, and his nonperformance here renders Charlie a cipher at the center of the proceedings. We never see whether he bears any qualms about killing his brother or any hatred toward the lawman who’s putting him up to the job. The movie is much better when it sticks with the captain and his attempts to maintain his moral equilibrium amid a community seething with demands for retribution. The townspeople form a lynch mob that demands he hand over Mikey to them. His own officers are drunk, incompetent, disloyal, racist, and brutal. His wife (Emily Watson), whom he tries his best to keep away from the more sordid aspects of his job, wants vengeance for her friend, the mother of the family, a woman who was raped as well as murdered. His boss is an officious, sneering, well-dressed bureaucrat (David Wenham) who, somewhat predictably, turns out to be the bloodthirstiest character in the film.

Winstone is an English actor who’s made for a part like this, a large guy who throws his weight around and tries to impose his will on everyone else, only you can tell from the strain in his eyes and the battle-weariness in his voice that he’s losing the appetite for the fight. He did much the same thing in the 2001 British gangster film Sexy Beast, but here Winstone oddly gains a hold on your sympathy even though he doesn’t stint on Captain Stanley’s cruel edge, cultivated through years of dealing with insurgents and threats to Her Majesty’s empire.

Elsewhere, the movie pretty much plays like a great many other Westerns. Cave’s script is surprisingly polished when it comes to dialogue; you’d expect a song lyricist to write so “poetically” that his dialogue would be undeliverable. This does happen once, in a scene when Charlie meets a drunken bounty hunter (John Hurt, whose long hair and beard make him look like Willie Nelson). The scene stands out because of Hurt’s oppressive overacting, but it’s also the only time the movie indulges in any real weirdness. Charlie’s quest doesn’t gain any urgency as the story approaches its denouement, and when we finally meet Arthur about halfway through the film, he’s a muted presence despite all the horrible deeds attributed to him. This is probably because Danny Huston, as good as he’s been in movies like The Constant Gardener and Silver City, is the wrong actor to be playing a psychopathic killer.

The film’s ending is as bloody as you might expect, and Hillcoat does a good job of building up to it. Nevertheless, it comes off as strangely flat, offering little in the way of catharsis. The Proposition’s pretensions fall short of the real achievements of other recent Westerns such as Brokeback Mountain, The Three Burials of Melquiades Estrada, or even Serenity. That it remains a rather accomplished movie goes to show that for a genre that’s supposedly dead, Western films are still doing quite well.