Home Music Music Feature Blowout
SHARE
Facebook
Twitter
Word’s been out for a while that Daniel Katsuk, of A-Hummin’ Acoustical Acupuncture and formerly Spoonfed Tribe, is leaving town to do the music thing in Denver, Colo. Along with fellow Triple-A members Precious (vocals) and Jonathan Irwin (percussion), Katsuk plans to go out with a bang. Literally. 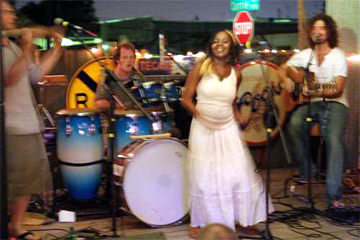 The singer-songwriter and a lot of his old homeys from like-minded local psychedelic bands will gather at the Wreck Room this Saturday for what basically amounts to a jam — but not just any improvised throwdown. The Skin and Bones Drum Cult’s performance will be super heavy on the percussion. Featuring members of Spoonfed Tribe, Pablo and the Hemphill 7, Confusatron, Peach Truck Republic, The Feds, and Sleeplab, Skin and Bones will also play the after-party at an Eastside speakeasy. You could even say the party begins the day before at the Ridglea Theater, where Spoonfed Tribe will perform along with Woodbelly, Ellipsis, Kultura, and Arlington-based newcomer Company Lab.

The weekend of bacchanals trails a show by Katsuk’s other side project, Dia de los Muertos, a hydra-headed ensemble whose music has a strong acoustic presence but is dance-y, trance-y, and spiced with Latin and Middle Eastern flavors.

Both Skin and Bones and Dia de los Muertos have a performance art aspect, something that Katsuk wants to explore further in Colorado with Triple-A. (No surprise: Katsuk’s entrée into the professional music biz came via theatrics. Before he launched Triple-A about four years ago, he played in Spoonfed Tribe; before he began playing in the Tribe, he was one of the Tribe’s “vibe enhancers” or people who danced onstage during live shows.)

“We feel the music deserves it,” Katsuk said of his reasons for incorporating theatrics into Triple-A performances. “The musical experience is more like a soundtrack to a living movie” than pop music in the traditional sense.

Katsuk and Precious decided to change the scenery in their own movie about four months ago after playing a festival in Denver. The duo had been kicking around the idea of moving for a while, long before visiting the Mile High City. “I’ve been here in Fort Worth for a long time,” said Katsuk, whose parents, like Precious’, still live here. “I’ve done so many beautiful things and had a wonderful time. It’s just time to take it up a level.” 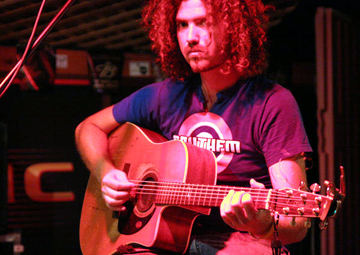 Of the three or four cities the duo had been considering, Austin was near the top of the list. The main reason the Lone Star State’s capital city lost the Triple-A sweepstakes: Denver’s music lovers are reportedly the most rabid Katsuk’s ever seen. “People in Denver actually budget themselves to go see live music,” he said. “They’re just into going out and supporting local music.”

Denver is also aesthetically pleasing. “Fort Worth is beautiful, artistically and culturally,” he said. “And city is city, no matter where you’re at. But at least in Colorado, there are the mountains,” and they, Katsuk said, provide observers with an “opportunity to connect” with nature in one of its most glorious, awesome forms.

Triple-A’s headquarters in a cool, good-looking town that is within hours of other cool, good-looking towns will be a boon to some of the bands back here. They now all have a place to crash. The two groups for whom Irwin also plays percussion, Confusatron and Pablo, are both loving the fact that he’ll be spreading roof in the Rocky Mountains, he said.

Katsuk and company aren’t wasting any time, either. They’ve already landed additional musicians, a publicity company, and, to help fund a forthcoming studio recording, an investor. Triple-A has also made some appearances on regional talk shows. Ack! Does this mean that one of the grooviest bands around is selling out?

“We want our music being heard by as many people as possible,” Katsuk said. “Whatever outlet is fine.

“I’m not about the radio,” he continued. “But ‘Smells Like Teen Spirit’ [by Nirvana] saved my life, and if it looks like radio’s gonna be that way, and if our music is gonna be expanded, then I want that.

“I’m not so arrogant to think that my music is only for an underground group of listeners.”

Maybe by the time Katsuk, Precious, Irwin, and the rest of the new Triple-A get going, commercial radio will have reverted back to its old, great ways (circa 1990). “We have no agenda and no timetable,” Katsuk said. “We want to form a full band, get tight, do an album, and then start touring.

“The full-band concept is new to us,” he continued. “We want to take our time and figure it out.”

Katsuk agreed: “Triple-A here is a chapter that’s been closed. When we return, it’s gonna be a totally new book. It’ll be the same, but it’ll be what you always wanted to hear.

“It’s been fun,” he continued. “But it just needs to expand.”