Home Eats Eats Keg Stand-Out
SHARE
Facebook
Twitter
The Covey Restaurant & Brewery is exactly what its name suggests: a place that brews its own beer and serves food. But don’t think for a second that the cuisine is anything less than gourmet or that the ambiance is picnicky. Located on South Hulen Street amid a morass of chain eateries and near a Tom Thumb supermarket, the recently opened restuarant is intimate yet spacious and beautifully appointed. Though split nearly right down the middle into a formal dining area and a bar, the place is hardly schizophrenic. The dining area is laid back, and the bar is classy — the two halves are united by a friendly vibe and the hue of rich burgundy. 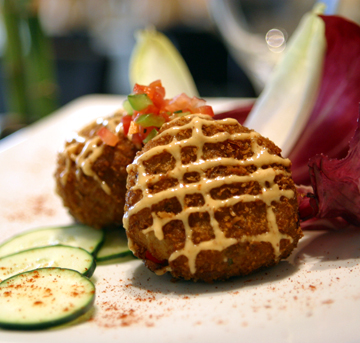 The fare is exceptional in quality and presentation, and so is the service. Until they’ve eaten here, folks who frequently dine out may never realize how often they’re short-changed on flavor elsewhere. Executive chef and co-owner Sean Bautista has essentially put other semi-upscale eateries on notice: Every bite of every dish recently sampled was glorious.

Starting with the appetizers: All three items on the sampler platter — a crab cake, sausage-stuffed mushroom, and a game concoction — were little miracles of sweet and sour, earthy and silky, and spicy and cool. The game on the evening of a recent visit was surprisingly succulent quail. The crab cake, drizzled with a zesty orange hollandaise sauce, was dense and nicely crunchy but went down gently. The massive mushroom was also dense, and while it definitely warmed the stomach — and the heart — the not-so-delicate delicacy magically aroused the appetite without sating it. The items, served on a narrow rectangular white plate in a neat row, were fancy-looking enough to let new diners know they weren’t in the Kansas of plain ol’ bar grub anymore.

Two other appetizers were also tasty. The calamari came lightly breaded and fried and had been cooked perfectly — no rubbery bubblegum here. The caviar, served in mushroom caps and artfully splashed with a sugary, buttery white dressing, boasted an appropriately decadent, salty flavor that complemented the slightly chewy texture of the fat, juicy ’shrooms.

One of The Covey’s specialties is the Chinese five-spice rack of lamb, and, boy, is it special. When it arrived, the dish looked like an ancient ruin. A handful of pan-seared, roasted lamb shanks tilted their bones together over the center of the plate where a colorful grilled vegetable skewer and a beige mound of rice pilaf sat. The rice and the veggies were superb, sure, but the lamb: “Smoky,” “meaty,” and “melt-in-your-mouth” are just three of about a dozen positive modifiers that aptly describe it.

And even though The Covey doesn’t bill itself as a steakhouse, it can certainly bring the beef. The rib-eye steak was as tender and juicy as anything you’d find at The Silver Fox or Sam & Harry’s, and the mountainous burger may take an hour to finish. The thick, firm fries that accompanied the monster were also delectable.

As for the beer, it’s brewed on-site by brewmaster and co-owner Jamie Fulton. For the uninitiated, a good way to start is by ordering the sampler, an arrangement of tiny glasses of the six to seven varieties usually available. The amber ale is smooth with a kick at the end and is recommended for regular beer drinkers, and lads accustomed to the heaviness of a traditional stout may want to avoid The Covey’s version. Not that it’s bad, by any stretch, but it’s lighter than air. In the middle of the beer spectrum are the Texas Wheat (bright and, with a pinch of lemon, sweet but not cloying) and the Smoke Beer (which tastes like the delicious aroma of smoked gouda). Feel free to ask the servers which varieties go best with which dishes.

The Covey represents Bautista and Fulton’s inaugural foray into Cowtown cuisine. On paper, hand-crafted beer and upscale food do not make good bedfellows. On the table at The Covey, however, you wonder why nobody thought of joining them sooner.