Home News Metro Sayonara to SAM
SHARE
Facebook
Twitter
When Southside Area Ministries shut down at the end of May, all of the office furniture was donated to Berry Good Buys, where it will be sold to benefit the Women’s Haven and Safe Haven. The office phones were cut off before the May 31 end-date, saving a few dollars that could be put toward paying off bills. Years of files and papers were taken home by executive director Linda Freeto, and boxes of books were given to students who were once members of SAM’s after-school programs. 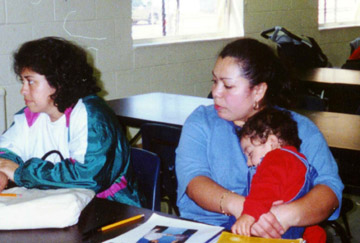 After 30 years of service, Southside Area Ministries had its fate formally decided in early April by its board of directors. Its absence in south Fort Worth will be felt most keenly by the 160 or so children at two elementary schools who attended SAM’s after-school tutoring and English as a Second Language classes and the roughly 80 adults who also took ESL classes.

But the small charity, which provided its programs on a meager annual budget, has been in an increasingly precarious position for several years. Recent international tragedies, from 9/11 to last year’s Gulf Coast hurricanes, have turned out to be disasters not only for the people immediately affected by them but, in some cases, for small charities like SAM. With the attention and donations of charitable-minded folks turned elsewhere, Southside Ministries and others have found themselves at the tipping point, no longer able to put together enough money to keep going.

Ironically, Southside had been approved for about $30,000 in grants for 2006-07, including several first-time grants. But with other funding still inadequate, the board went ahead and made the decision to shut down, and Freeto had to contact benefactors and turn down the grants.

Keeping an eye on the bottom line is a constant pressure for small nonprofits. “It’s always the money,” said Freeto, executive director of SAM for 11 years. A Methodist minister and in recent years the charity’s only full-time staffer, she spent a lot of time writing grant proposals and asking for donations from local churches and synagogues. The funding declined to a mere trickle after 9/11, Freeto said. In 2000, the group’s total income from donations and grants was about $111,000. For the 2001 fiscal year, the total dropped to less than $84,000, a 24 percent decrease. “With all the catastrophes nationally, people didn’t see English as a second language as a top priority,” said Lisa Petro, the chairwoman of SAM’s board.

Freeto said some donors also had a problem grasping the idea that results from programs can take years. A new language isn’t learned in two semesters, bringing up a child’s grades with tutoring can be a slow process, and encouraging kids to stay in school is a constant fight. 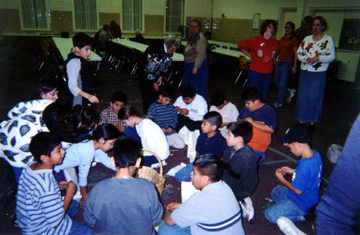 Nancy O’Malley, vice president of public relations and marketing for United Way of Tarrant County, said funding for many nonprofits has declined or leveled off in the past five years — in large part, she said, because there are more and more charity groups competing for donors’ dollars. The United Way itself, which helps support more than 40 charitable groups locally, used to be able to count on an increase in funding every year, O’Malley said, but that is no longer the case. “People’s money is just spread too thin,” she said. “Even the big nonprofits like us have to work hard to make people aware of what we do and get funding.”

Another small nonprofit based in Fort Worth, Parents and Children Together, has also felt the effects of money going elsewhere. PACT works with families of the incarcerated and in the past relied on federal contracts to pay teachers of parenting classes at many federal prisons across the country. Suzie Boeglin, executive director and pastor of PACT, said federal money started drying up post-9/11. “We lost about $160,000 over four years,” Boeglin said, and now PACT teaches parenting classes at only two prisons, both in South Carolina.

At Southside, even the most careful financial planning wasn’t enough. From her already-frugal budget, Freeto learned over the years to set money aside in a small emergency reserve. But when donations nosedived after 9/11, the reserve had to go for day-to-day expenses. She built up the reserve again, only to see it wiped out when the same thing happened after the Indian Ocean tsunami in 2004. When Hurricane Katrina hit late last summer, there was little reserve to turn to, and things started looking even grimmer than usual.

Over the last year, the agency reduced its staff from seven part-time staff members, plus Freeto, to four part-timers and Freeto, who was teaching classes as well as managing administrative and financial chores. Petro said the board felt the nonprofit was reaching a dangerous point at which hand-to-mouth funding might mean a program would run out of money midstream or that there wouldn’t be money to pay a staffer for work already done.

Longtime board members felt that perhaps the charity had seen its day, Petro said. Still, Freeto was surprised by the final decision. She said it seemed as though the board just got tired of fighting for funding.

For those not directly tied to Southside Area Ministries, its disappearance may go unnoticed. “SAM had always been very quiet,” said Freeto. “We have work to do, and we’re serious about it, and we just do it.”

But others will miss SAM’s work. Brenda Wier, executive director of the Metropolitan Board of Missions for the United Methodist Churches in the Fort Worth area, often heard about the work of Freeto and her co-workers from elementary school teachers and parents. She said the nonprofit pointed out to the school district that immigrant and refugee children often need additional tutoring. “I’m hoping SAM can rebuild itself and step into a new area where needs aren’t … being met,” she said.

For now, Freeto is working as an associate pastor at the First United Methodist Church in Midlothian. She’s still hoping to return to charity work and also hoping there’s something to be learned from what happened to SAM. “Maybe this could be a wake-up call, that if you don’t donate to a nonprofit, they will close down,” she said.

One of Freeto’s worries is what will happen to the children and adults who attended Southside Ministries’ after-school and ESL programs. “There isn’t anything else on the South Side — that’s the problem,” she said. “Everyone kept saying someone else will step up, and maybe they will, but I don’t know of anything else there.”

In fact, it may be Freeto who steps up — she already is thinking of trying to start a new nonprofit to continue and enlarge SAM’s work. She’d like to put together a group to start a thrift store on the South Side, sponsor families in need, offer citizenship classes for new immigrants and refugees, and fight for fair housing.

Petro said that SAM might be able to make a comeback if it could find better ways to advertise itself better, raise money, and find volunteers. The charity didn’t close down because of lack of need, she said. “We’d still be going if we still had the money.”