Home Eats Eats Stir It Up
SHARE
Facebook
Twitter
Now that Beto’s American and Caribbean Cuisine is here in town, the craze over Red Stripe beer is finally starting to make sense. As a social lubricant, the Jamaican export is merely so-so. It has a skunky aftertaste, and a single stout sip burns the throat, puffs up the tummy, and ultimately precludes the delivery of smooth talk. 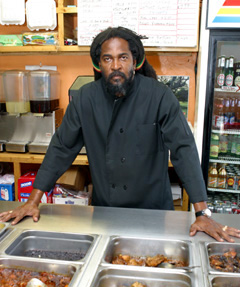 But when accompanying the kind of super-spicy, authentic-ish Jamaican food served at Beto’s, Red Stripe performs meritoriously. On a recent visit, the beer in the squat brown bottle put out more than a few tongue fires. As a product of one of the most famous tourist destinations on earth, the hoppy lager also connotes a sense of relaxed decadence, which works perfectly at Beto’s, where the atmosphere is relaxed and the dishes are decadent.

The namesake co-owner and his wife opened the Southside spot roughly a year and a half ago, and they stand behind their regularly revolving menu of about a dozen hot items in more ways than one: Beto’s is totally cafeteria style. And, yes, behind the co-owners, inside the refrigerator’s glass doors, are rows of Red Stripe, neatly lined up like soldiers on party patrol.

In true open-minded Southside fashion, the dreadlocked Beto stresses the exotica of his native land but adds enough American touches to welcome neophytes. He also speaks in that everything’s-cool, “irie, mon” accent. Vacation, here we come.

The old standbys were unfussy, nonchalant blends of the two culinary cultures in the restaurant’s name. The jerk chicken wasn’t meaty and bountiful the way we fat, greedy Americans like it but just enough and still on the bone. So you may have to work a little at the table — big deal. The entrée is worth the sweat. Not only was the bird juicy, but the rub gracefully walked the line between overpowering (too much cloves, cinnamon, and heat) and flavorful. Thankfully, Beto’s goes against the grain here and leaves the salting to the diner.

The curried goat was also a rustic, bi-cultural delight — a lot of meat, a lot of bone, and a lot of heavy brown sauce. Hotter than Hades in July, the dish was too much for poor Red Stripe to handle alone, so reinforcements were called in: a side of buttery yellow rice. The other options were cabbage and white rice and beans. Beto’s curried goat laughs derisively at the mild cabbage and is in cahoots with the scathing rice-bean combo. The yellow rice, along with a Red Stripe (or five), performed admirably.

A word of caution: If you visit Beto’s, please heed the words of legendary Jamaican Bob Marley and “simmer down.” In other words, leave your machismo at the door. Unless your mouth is made of asbestos, do not test Beto’s flame. At one point during service, as my guest and I were digging into a delicious dish of lava — um, I mean, meat pie — good-natured Beto came over and warned us about the Matouk’s Hot Pepper Sauce on the table. Naturally, like idiots, we decided to sprinkle some of the Trinidadian picante on our plates. I think we’re both still sniffling.

Because we wanted something, anything, to soothe our scorched mouths, we pretended we had room for dessert. To the rescue came Beto’s sweetly soaked rum cake. Apparently, my guest and I weren’t as full as we thought: The massive slice went down quickly.

Even though Beto’s serves food cafeteria style, the place isn’t just a lunch stop. The bar is fully stocked and specializes in both premium and well-quality rums, a reggae band plays on the patio every Friday night, and Saturday evenings belong to DJ’s who spin salsa and reggaeton. What better way to work off a highly caloric meal than on the dance floor, right?