Home Music The Show The February Chorus
SHARE
Facebook
Twitter
For a couple of years back in the day, The Aardvark hosted a monthly showcase of some of the best, most long-standing, and most stalwart singer-songwriters in town. The round-robin-style Acoustic Mafia not only drew music lovers from all over the Metroplex but afforded the likes of Tim Locke (The Grand Street Cryers, Blue Sky Black, Coma Rally, Calhoun), Collin Herring, and Brandin Lea (Flickerstick) the chance to both flesh out and introduce new material. 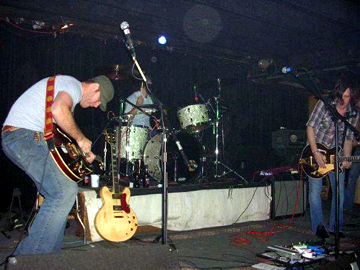 Lea’s handiwork was especially captivating. With backing help from some killer local musos, including his brother, Flickerstick bassist Fletcher Lea, the veteran tunesmith quickly emerged as the Acoustic Mafia headliner. Unbeknownst to him, he had stumbled upon a new project, one to which he now devotes a vast majority of his time and which is known to most indie-rock connoisseurs.

Darkly, richly ambient yet propulsive, The February Chorus sound is also simple and raw yet highly polished. Rounded out by guitarist Jordan Roberts (Audiophiles), bassist Taylor Craig Mills (Taylor and The Iliads, formerly known as Voigt), and drummer Austin Green (The High School Assembly), the band has just finished a two-song e.p. at Bart Rose’s First Street Audio recording studio (with help from The Iliads’ Derrick McDonald on the boards). Consisting of two transportation-themed tracks, “On a Train” and “Cars and Planes,” the disc naturally engenders a transportation-themed title. Catch The Transportation E.P. soon.