Home Arts Stage Hell to the Chief?
SHARE
Facebook
Twitter
It’s assumed that the majority of regular theatergoers lean a little bit to the left politically. If that’s true, then the myriad presidential misdeeds by our current clueless leader must be much on the minds of the audience members who’re flocking to The Dead Presidents’ Club, a Circle Theatre revival of Larry L. King’s raucous and profane comedy that asks the question: What if some of the most controversial American presidents of the 20th century were asked to justify their history-making decisions in front of an Old Testament-style God, who had the discretion to send them to heaven or hell based on how persuasive their purgatorial stump speeches were? 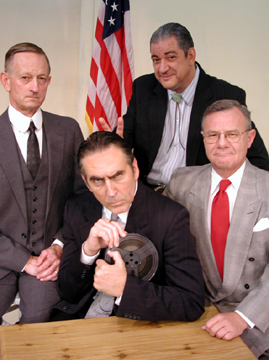 Sadly, the 21st century Decider-in-Chief’s incompetence and duplicity are not on display here. If so, they’d surely do a lot to hasten the rehabilitation of Richard M. Nixon, who was most definitely a paranoid, vengeful, compulsive liar but whose crimes seem almost quaint compared to the American and foreign blood that has been shed in the Middle East since the start of the Iraq war and the continuing slaughter of Lebanese citizens. But playwright King is clearly of the generation that loathed Nixon’s Constitution-screwing antics and came to considerably more measured views of the other commander-in-chiefs depicted here — Lyndon Johnson, Harry Truman, and Calvin Coolidge. All four of them are trapped, post-mortem, in a military-style barracks, awaiting a council with an Almighty who offers plenty of revelations about the difference between what they think of themselves and what their distinctive personalities have really wrought.

As directed by Linda Leonard, Circle’s staging of Dead Presidents is more vaudevillian and less cerebral than the script’s musings about the Vietnam War, Hiroshima, Watergate, and conservative/liberal dichotomies suggest. There are even a couple of song-and-dance numbers when the presidents (and God) get to strut their most pungent self-defenses and rationalizations. The rest of the two-hour-plus show can be boiled down to standard mismatched-roommate banter, which doesn’t mean that, at times, it’s less than hilarious. But the show, despite its often brisk charm and bountiful well-timed barbs, still never quite finds a satisfying blend of savvy political satire and the low-slung bottom line of a sitcom.

It’s understandable why the playwright made Nixon (Bill Jenkins) and Johnson (Mark Fickert) his main anti-heroes, co-conspirators, and comic team. Not only did King meet both of them during his years as a congressional page for Fort Worth U.S. Rep. and House Speaker Jim Wright, but their complexities and eccentricities can be picked apart for eternity. As LBJ, the towering Fickert arguably does the best job in the show of turning an extended presidential impersonation into a vibrant comic performance. He’s an arm-twisting good ol’ boy with an uncommon streak of humanitarian conscience, a liberal hick who despises East Coast elitism and can chat with Southern senators about “the niggers” even as he pushes civil rights legislation through Congress with ruthless determination. Fickert is a skyscraper of bellowing contradictions and angry appetites. He also earns the biggest laughs from ticketbuyers.

That is, with the possible exception of Jenkins as Nixon, who perhaps cannot help but carry that man’s notorious facial and body tics like airport baggage after countless comedic interpretations across the decades. Jenkins doesn’t quite transcend impersonation — the painfully long face, over-bitten smile, hunched shoulders, and habit of referring to himself in the third person — but he does manage to loosen up those contrivances enough to keep the audience interested in his next one-liner. “All mothers deserve to be loved,” he observes at one point. “Even welfare mothers.” And he laments that he died before finishing up his final book, aptly titled A Reassessment of Integrity.

“Give ’Em Hell” Harry Truman (Vince Davis), who authorized the bombings of Hiroshima and Nagasaki at the end of WWII, and “Silent” Calvin Coolidge (Kit Hussey), the Roaring ’20s figurehead whose accomplishments remain elusive to most historians, round out this quartet of titanic egos desperate to enter the pearly gates. Both Davis and Hussey do fine jobs, even if it’s always apparent that playwright King keeps them subservient to their colorful presidential successors. Hussey in particular makes the most of his role’s economical dialogue. When Nixon tauntingly wonders what Coolidge can say he accomplished in the Oval Office, the taciturn Vermonter coolly replies, “Finished my full term.”

The Dead Presidents’ Club has another sly trick up its sleeve in the character of God, but for parties interested in catching Circle Theatre’s ribald, anarchic, and sometimes too-shticky staging, that’s perhaps best kept a secret. Let’s just say that the Lord as depicted here didn’t travel in the same country club circles as these four world leaders, and she’s not in the least impressed with their sense of entitlement.