The problem with most comic books and graphic novels is that most if not all of them are pretty poorly written. Obviously, I haven’t read every title ever published, but I have been through enough to make a sound generalization. I’ve yet to come across a single book — including anything by Robert Crumb or Harvey Pekar, and the Pulitzer Prize-winning Maus — that doesn’t have stilted, overly explanatory dialogue, poorly structured plots, and an utter lack of passion for the written word. As long as crappy writers continue trying to imbue comics and graphic novels with literature’s gravitas, no one will ever take them seriously. Seriously. 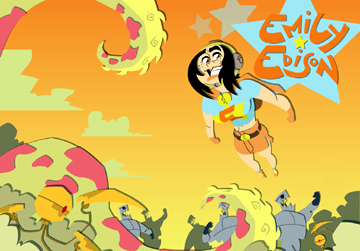 My expectations for local writer David Hopkins and artist Brock Rizy’s first full-length graphic novel, Emily Edison, were higher than usual. I planned on being entertained, sure, but I also thought I’d be enlightened. A semi-academic essay Hopkins wrote on Superman was recently published in a pop-culture anthology by BenBella Books, and examples of Rizy’s work online looked cool. Both guys seemed eminently capable of producing a neat-o product.

Emily Edison’s premise is promising. A few years before the book opens, an earthling scientist named John Edison invented a vacuum cleaner that sucks dirt into another dimension. Somehow “it caused a rift in the fabric of reality,” and at some point, ostensibly in another dimension, John met Lucillana, a “beautiful woman” of noble stock. The two fell in love, got married, and had Emily. The marriage, however, didn’t last, and now Emily travels back and forth between her mom’s dimension and ours.

Lucillana’s patriarchal father is tired of sharing his granddaughter. Grandpa Vigo’s answer is to destroy the earth, leaving Emily with no other place to live than with him, Lucillana, and Emily’s half-sister Koo. Like Lucillana and Koo — but unlike everyone else in our dimension — Emily has superpowers. She uses them mainly to battle Grandpa Vigo’s badbots, chintzy killing machines bent on destroying the planet.

The premise is fine, but it takes up just about every panel of Hopkins/Rizy’s book. At 140 pages, Emily Edison has more than enough room for the creators to explore the machinations of teendom. Emily’s world, though, remains unchanged from the beginning of the book to the end.

Even the best yarns have lapses in logic, usually redeemed by layered characters and action sequences and dialogue, and by wonderful prose. Since Emily Edison, on an intellectual level, makes The Teletubbies look like Proust, Hopkins’ narrative screw-ups are magnified tenfold. Why is John leery of letting Emily use the vacuum cleaner? I thought it was their inter-dimensional portal. Also, if Grandpa Vigo is a genius, why are his badbots as lame and ineffectual as Stormtroopers? And why doesn’t he have superpowers, like Lucillana and Koo?

Doing the lion’s share of keeping the reader’s attention here is Rizy’s artwork, a frenetic mix of anime and what you might find on the storyboards of an animated cartoon. With her dark hair in a bob, freckles, and squat, muscular frame, Emily is definitely a tomboy, even though she wards off terror in an orange skirt. There’s nothing overtly sexual about her — or the other women in the book, including Emily’s best friend Molly — but there are moments when the creators indulge in a little schoolgirl fantasy. I mean, do we really need to see Emily and Koo battle each other in pajamas for 12 pages? And at one point in the book, a tendriled city-sized monster fatally mauls one of Emily’s teachers, Mr. Hopkins, the writer’s not-so-subtle doppelganger. In his absence, another adult, clearly Rizy’s doppelganger, ends up teaching Emily’s class, and on his first day, “Mr. Rizy” stands with a cigarette in each hand over a seated female student and says, “Young lady, that skirt is way too short. I’m gonna need to see you after class.” OK, suggestive humor is not unheard of in the world of comicdom, but it’s a tad unsavory here, for a book that has the trappings — and depth — of a Saturday morning cartoon.

There’s a group of Star Wars enthusiasts in town who build replicas of R2-D2 from scratch. The better recreations of C-3PO’s little blue-and-white best friend do everything the “real” astromechdroid did: twist, turn, make bleeping noises, make chirping noises, and ambulate by means of tiny wheels. They do not take orders. They do not provide navigational support on X-wing starfighters.

“Everybody wishes we were at the point in technology where we could have our own [R2-D2],” said Jay Aycock, a Keller resident who is currently working on his own model and running www.astromechdroid.com, a web site devoted to the hobby. “But we can try to get as close as we can.”

Making models of artifacts from movies is nothing new, especially as they relate to George Lucas’ six-part epic, a heretofore unparalleled sci-fi cinematic achievement and one that has developed possibly the largest fan following in the history of moving pictures. Some model-builders focus on 3PO, battle droids, or obscure medical droids, but the guys in Aycock’s informal group share an affinity for R2, for whatever reason, and they have been convening in cyberspace on a regular basis for about three years. Until a gathering last week at Aycock’s home, they’d met in person only once.

More than a dozen people, including one member’s wife (who “seemed bored,” said Aycock), showed up. Some, from as far away as Houston and Midland-Odessa. They lamented the brutal Texas weather, drank Coke, and munched on pretzels. Mostly, though, they talked shop. Lucas was a main topic of conversation.

“Lucas knows we’re doing it, but as long as we’re not mass-producing these things and selling them on eBay, he doesn’t mind,” said Aycock, a 42-year-old systems administrator for Citigroup. “Some people choose to make them out of wood and resin and plastic, but the hardcore guys who have money to burn, they build them out of aluminum.”

One hardcore R2-maker at the party was Scott Powers, a 32-year-old from Allen who’s made one helluva realistic droid. It doesn’t make coffee in the morning, but it sure does look like it could. Visit www.astromech.net for images and information.

“My one-year-old’s a little freaked out by it right now,” Powers said. “But she’ll warm up to it.”

Powers assembled the droid from scraps found at his uncle’s machine shop in Haltom City. “I’ve had people offer me 15 grand for it,” he said. “But I’m not at that point right now. I bought it to put in my future home theater, but if I ever need a new car … .”

Powers’ R2 is a celebrity of sorts. He’s a fan favorite at Star Wars conventions all over, and he was the guest of honor (kind of) at a recent performance of John Williams’ score by the Dallas Symphony.

We’ve had tomes on Texas courthouses, cemeteries, and art museums. So it was only a matter of time before someone wrote about our old-time jails. And why not? A lot of Texas pokeys from yesteryear were as architecturally brilliant as other grand structures of the time.

An appreciation for and lack of previous history on Texas jails led retired physician Ed Blackburn Jr. on a road trip though all 254 Lone Star counties to collect the skinny on vintage hoosegows. Some are still standing. A lot are gone.

I guess if you gotta go to jail, Blackburn’s seems the preferred route. Told in first person, Wanted: Historic County Jails of Texas (Texas A&M University Press) is full of the author’s experiences, traveling the state, collecting pics, and talking to old timers. Every joint he writes about is from the era between 1840 and 1940.

Like other public buildings, jails were proof that a young town had come of age. For obvious reasons, architects and city planners today don’t spend a lot of time — and taxpayer money — on building attractive jails. At least here in the States. Some other countries put a lot of effort into making jails look decent, not for the sake of the inmates, of course, but for the law-abiding citizens who are forced to either live or work nearby.

One Fort Worth story is a hoot. Apparently, in 1877, the local architectural firm Thomas and Werner built a jail here but forgot one thing: the locks. Yes, there were a lot of escapes.