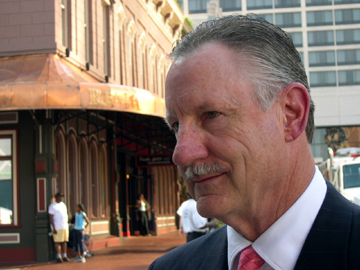 Did Mayor Mike Moncrief violate the city’s ethics code when he failed to abstain from a vote that benefited a company in which his son is an officer? Or was Moncrief on solid ground, since the son’s company was merely under contract to the primary company with which the city was doing business?

Those are questions currently being debated by Moncrief’s political friends and foes. At issue is his “yea” vote last fall that allowed the city to spend $3.5 million on infrastructure to kick-start the Mallick Group’s 232-unit housing development under construction on the city’s Far Southeast Side.

The project itself has few critics. The decision to help a developer build affordable housing in a high-risk market in one of the most economically depressed areas of the city is hailed by most as exactly how Fort Worth ought to be spending tax dollars to revitalize its poor neighborhoods. The Mallick Group tore down more than 1,000 rotting apartment units that had been serving as a breeding ground for rats and crime for more than a decade on Riverside Drive just north of Berry Street. They will be replaced with new single-family homes that will sell for around $80,000 in the development known as Sierra Vista. “I’m taking a big gamble, that with this kind of private-public partnership, we can turn this area around and make it livable again,” company owner Mike Mallick said.

Casting a vote for the project, however, has become an ethical conundrum for the mayor: Troy Moncrief, Mike and Rosie Moncrief’s son, is president of Sendera Title, the company that is providing title insurance and escrow services for Mallick on the $22.4 million project.

The city’s lengthy ethics code, adopted in 1978, states, in part, that no council member “shall vote or otherwise participate” in a decision before the council that could result in a financial benefit “directly or indirectly” to the council member or a member of his or her family. Further, the code requires full disclosure of any financial interests of an elected officer or those of a family member “in any matter pending before the council.” Moncrief not only voted for the development, he failed to disclose his son’s interest in it. Penalties for elected officials who knowingly violate the code include removal from office on a majority vote of the council.

Moncrief — as has become his habit — did not return phone calls seeking comment, but his son stood up for him.

In a brief telephone conversation, Troy Moncrief took offense at the suggestion that there was anything unethical about his father’s vote. This issue, Troy said, is being fanned by his father’s political enemies. When asked if there had been any discussions between father and son about a possible conflict of interest for the mayor that could prevent his voting on the project, Troy Moncrief said no. “We didn’t discuss my involvement at all,” he said. “I’m not even sure that he knows that Sendera is Mallick’s title company.”

City councilman Chuck Silcox expressed shock when told of Troy Moncrief’s financial connection to the development, as much because he didn’t know about it as the likelihood that Moncrief had violated the ethics code. “Mike should have recused himself from the vote,” Silcox said. “And he should have told the council” about his son’s job with the title company. “This looks clear to me that Mike’s vote violated the code,” he said. “If any of us have any family member with a financial interest in something we’re voting on, we should abstain. Even if it’s completely legal, there’s going to be a perception there that it’s an ethics violation, and that’s what council members have to be aware of, what our actions are gonna look like in the public’s mind.” On ethical matters, Silcox said he follows the advice given to the council by former city attorney Bill Wood: “If it’s not going to pass the public’s smell test, don’t do it, no matter what the law says.”

Current city attorney David Yett, however, said Moncrief was clearly within the bounds of the city’s ethics ordinance when he voted on the project because the city wasn’t doing business directly with Sendera. “The city could not make a contract directly with Sendera to handle our title work,” he said, “because of the mayor’s son.” But in this case, Yett said, the mayor had no obligation to reveal his son’s interests because the city’s agreement is with Mallick only. “We can’t tell Mr. Mallick who to hire to do his title work.”

Former city councilman Clyde Picht said Yett’s answer misses the point. “This is not about telling Mr. Mallick who he can or who he can’t do business with. Of course we can’t do that. It’s about whether or not the mayor should have recused himself, under the clear language of the ethics code, from a vote that would benefit his son and his son’s company, directly or indirectly.” If the mayor and the city attorney can’t see that, Picht said, “then they’ve both got their ethical blinders on.”

City councilman Donavan Wheatfall also felt left in the dark. “I didn’t know at the time that Sendera did the title work, and yes, Mike should have told the council and abstained from voting,” he said. Disregard for the rules “is typical of this mayor,” Wheatfall said. “A few of us [council members] have to continuously call Mike’s hand in executive session, because he wants to air out issues that should be discussed only in the open and take straw polls of the votes before we go into the public session, both violations [of the Texas Open Meetings Act.] He just doesn’t get it, that this is not Austin, where he can wheel and deal in the back rooms.” Moncrief served 12 years in the Texas Senate.

Picht, who was still on the council when the vote on the Mallick project was taken, and Silcox are both puzzled that the mayor didn’t take the high road on this one, reveal his son’s interest, and simply refrain from voting. “The thing is, it was a go,” Silcox said. “The mayor’s vote wasn’t needed. The council was solidly behind this.”

Even Silcox and Picht, both of whom regularly opposed tax help for developers, were backers of the Mallick project. “It’s neighborhoods like this where we ought to be investing tax dollars, instead of for the Cabella’s and the Alliance Airport crowd,” Picht said.

Both men gave high praise to Mallick for investing a large chunk of his own money in a risky venture to revitalize a long-forgotten corner of the city. Mallick envisions an “urban village” of commercial development springing up around Sierra Vista. For almost a decade, Fernando Costa, the city’s planning director, has pushed pedestrian-friendly, mixed-use urban village developments as the best way to revitalize dying neighborhoods. He is working closely with Mallick on this project. He was unaware, he said, of Troy Moncrief’s connections to Mallick’s company. When asked if he thought the mayor might have stepped over the ethical line with his vote, Costa said, “You have raised an interesting question.”

Mallick said he considers Picht and Silcox his friends and that he is gratified by their support, but they are “dead wrong” that the mayor’s vote on the project is an ethical issue. “Troy is one of the most honest and ethical men I know,” Mallick said. “So is his dad.” Their families have been friends for years, he said, since the thirtysomething Troy was a young boy. It was perfectly legit for Moncrief to vote on his project, he said, because Sendera, a Dallas-based company formerly called Blue Star Title Company with offices across North Texas, has been doing his title work for 12 years. That was “long before” Troy Moncrief, a former stockbroker, went to work for the company as vice-president of commercial marketing two years ago. The younger Moncrief was named president of Sendera’s Tarrant County office in July. “I would have used Sendera whether Troy was there or not,” he said. “I just hope this issue doesn’t get in the way of what we are trying to do for the East Side.”

Picht said his quarrel isn’t with Mallick or Troy Moncrief. “They are businessmen doing their jobs,” he said. “My concern is with the mayor’s failure to understand that those of us in public office must meet a higher standard of ethical conduct once the people have entrusted us to conduct their business.”