Home Music Music Feature All In
SHARE
Facebook
Twitter
In a story about SXSW for Rolling Stone last year, veteran crit David Fricke called the Denton-based Riverboat Gamblers “the best band without a major-label deal” at the festival. In the past, similar raves spawned music-industry feeding frenzies, but Gamblers lead singer Mike Wiebe says his group hasn’t been so lucky. “Mostly it was just sniffing-around kind of stuff,” he said. “I mean, nobody was writing out big checks and waving them in our faces.” 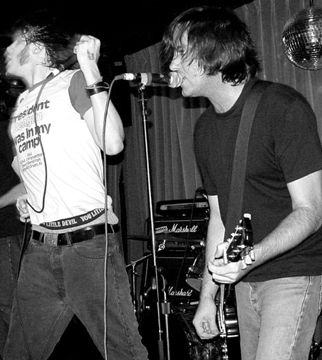 That’s too bad, since the Gamblers definitely aren’t rolling in the chips and, honestly, deserve better. Sure, Wiebe and company have received steady buzz about their live shows and latest c.d., To the Confusion of Our Enemies, a pure blast of rock and punk (in that order) released by independent giant Volcom. But despite the acclaim, Wiebe concedes that he and his comrades — guitarists Freddy Castro and Ian McDougall, drummer Mark Baker, and bassist Pat Lillard — are still grinding away at day jobs. “Two of us are in construction,” he said. “One of us is a burger flipper at a bar. Our drummer was doing drum-tech and sound-engineer things for shows. And I work at a nightclub and bartend and wash dishes.

“I’m not doing it out of some blue-collar sense of pride, either,” Wiebe continued. “I’d rather do the band full-time, and if we ever get to the point where I don’t have to have a job, I’ll definitely be honest about it. I’ll be like, ‘I haven’t washed a dish by myself for 20 years. That’s what maids are for.’”

Since the Gamblers’ beginnings about five years ago, a mix of straight talk and snarkiness has been one of the band’s most identifiable and, yes, endearing traits. Enemies stays true to the pull-no-punches approach embodied in the group’s debut recording, the 7-incher Jenna is a No-Show. Highlights include “Biz Loves Sluts,” a bite-the-hand salvo that may explain the dearth of contract offers, and “The Gamblers Try Their Hand at International Diplomacy,” which was written after a George W. Bush-hating Frenchman verbally attacked Wiebe for his Texas origins during a performance in Europe. But unlike the Dixie Chicks, the Gamblers never acknowledged their Dubya shame while gigging overseas. Instead, Wiebe said, “We’d always throw out that he was born in Connecticut. To us, it’s very important to mention that he’s not actually from Texas.” 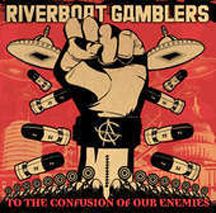 In other respects, Wiebe prefers to keep preaching out of his politically charged tunes. “It’s too easy to write a song that says ‘Bush sucks,’ even though he does,” he said. “I’d rather be more personalized — like, maybe, ‘I can’t afford health care and my teeth are fucked up, and if I was in Canada, it wouldn’t be that big a deal.’ ”

Fortunately, Wiebe’s choppers are fine, and thanks to the Gamblers’ current tour, he’s enjoying an extended hiatus from dishwashing-for-hire, a gig that admittedly doesn’t do much for his image. “I wonder sometimes if it would be better as far as a PR move to pretend that things are going fucking great,” he said. “You know, like, ‘Man, we’re huge!’”

Or at least as huge as Gamblers without a deal can be.